Goodness me! It's been too long since last I wrote. But you know what is awesome??

This Yule festival is lasting just over a month! It will end on Jan 31, which is coming up fast. It was long enough that even I had to get out of festival mode and see something else for a while. Less awesome... are the festival consumables' cooldowns. The snowballs are on a quick timer, but three of the other consumables are on a 5 minute cooldown and are tied to the same cooldown timer. Even with friends, that is painfully long when trying to go through 300 each for deed. Just bleh. I didn't finish those three deeds and I likely won't. It will be the first festival deed(s) I haven't finished since I started doing festivals nearly two years ago. Fortunately, the same deeds will be here next year, still sitting in my "to-do" deed list. Mebbe by then, the festival gods will have modified the cooldown timers to not be so ridiculous. Here's hoping.

Of yule present
I looked back on all the festival fun I had this season and was reminded of yule's past. So, I decided to dedicate an article to some of the fun from last year while I prepare an article on this yule fest. As a glimpse of things to come in the next post, here is a shot of my friends Cherrypop and Irialeth and I synchonized dancing on the lamp post near the entrance to Galtrev on Christmas day 2011. 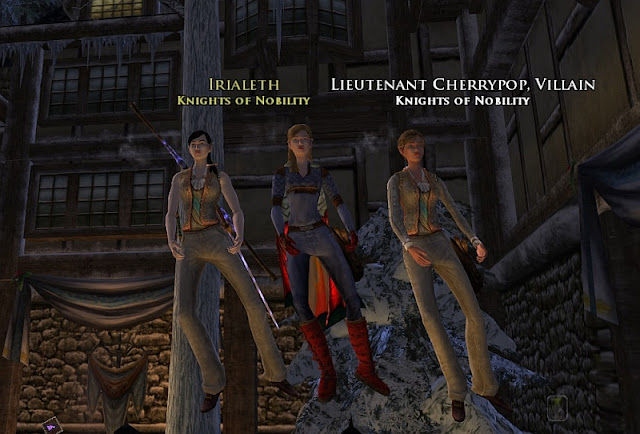 Of yule past
Now for some fun from last year!
Yes, I really did write some before starting this blog... but those are stories have been boxed up. Some other time perhaps... Here are a few though from yule's past.

Oh Bumble Monster of the North!

It is tough to be the antagonist, isn't it?
You just got a bad rap! A little bad publicity set you back generations.

Those deer shouldn't have been wandering nearby. I know! Deer's good eatin'!
You probably wouldn't want the red-nosed one anyway. I hear he's a misfit.


2011 Update: Did you notice that Bumble Monster totally took me up on my invitation to visit Frostbluff this year?? He and his friends mostly just prefer to lay around and pretend to not be enjoying the yule cheer. He is not fooling me; I wish him cheer everyday regardless. 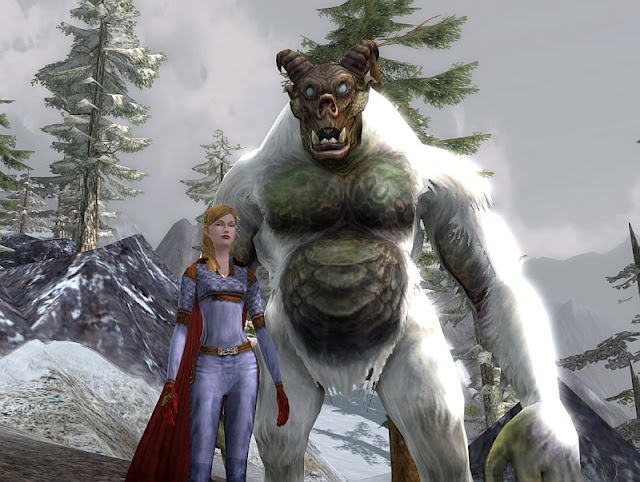 The north wind blows bolstering our numbers!
We shall usher in the winter fest and fight back the sun!

"I *am* Danania Darzil! And I see a whole army of my countrymen, here in defiance of tyranny. You've come to fight as free snowmen... and free snowmen you are! What will you do with that freedom? Will you fight?" ~Danania Wallace

2011 Update: My army is growing and undercover-general Virgil is recruiting daily to help build the snowman population! 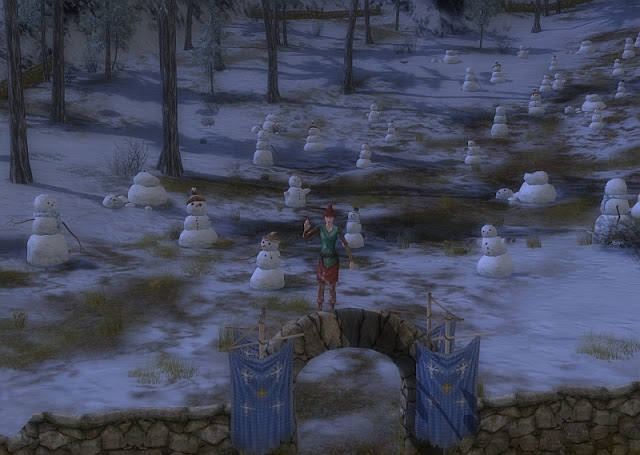 My friend Nicolas called and asked me to come for a visit. I have donned my yule apparel and am ready to go! I think I will get to play in the elves workshop. It is where I first learned to sew - elf-style! That said, I will be gone for a while... til after his big day is done and we sit around drinking cocoa (not yoo-hoo).

Danaish sends her Christmas wishes also. She is loading the horses and will be riding to the land of oranges and sunshine. It is her destiny to infiltrate the castle of the mouse king! She may have to fight her way through chipmunks, and ducks, and ...wth is goofy anyway?

2011 Update: It was a good vacation. :) ...and why didn't anyone tell me that Christmas hat and dress looked so hideous?? 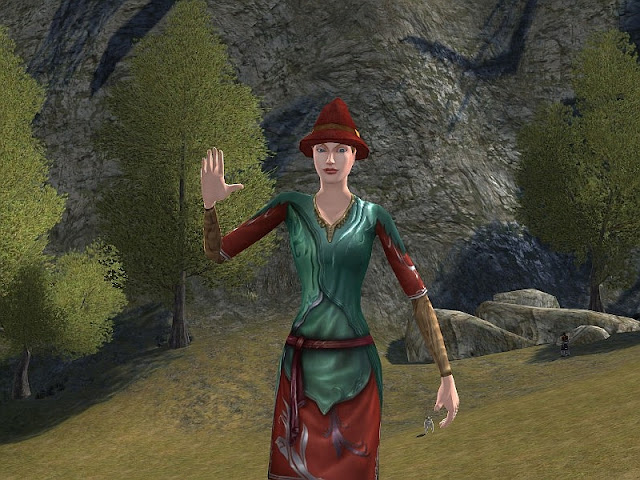 2010: Yule souvenirs
As if it wasn't obvious, I enjoyed the theatre!

I liked it enough to get the "at-home" version.

One of my snowmen minions took this shot from the front yard after I got through assembling the stage. I was starring in all three parts in an encore performance for my horses and snowmen minions. (Sorry my goat ate all the grass in the yard so it isn't quite as green at the moment.)
Menelchol suggested that my new title be "key grip" (better than "key gripe", I suppose.)


Thankfully, the lil Dana hobbits are going green with their packing material, wrapping the structure pieces in leafy vines (I did not ask or want to know the species of leaf this is... the snowmen made off with it and are lounging around not doing a darn thing now...).

2011 Update: My theatre stage is still sitting in the front yard, though we moved it to the other side of the yard to make room for the windmill (because windmills are so darn useful in Thorin's cave). 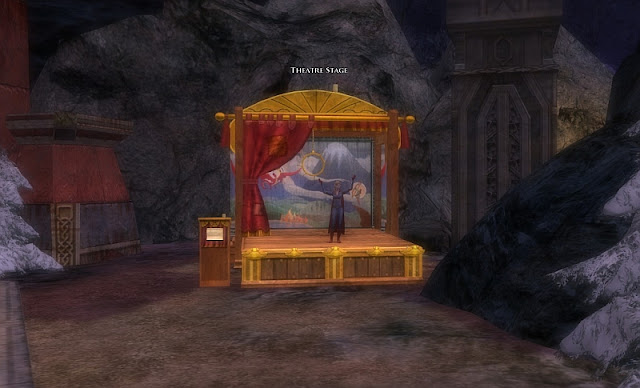 Wow @ the amount of brainpower trying to figure out how to sign in to leave comments this all took.

A Champ of very little brain, is me.

Having never done it before (right this very moment as I leave my first comment), I think the tough part is the "signing in" part. The comment part is... click the "leave a comment" button.

I suppose if you signing in part you could still leave a comment; it would probably list you as Anonymous. I'm just guessing though. :)

Thanks for being first commenter at my new home, Penglad. :)