Hey hey! A lil downtime there since my last post... I blame the tryptophan (http://hsionline.com/2002/11/27/thanksgiving-drowsiness/) though general holiday bustle is far more likely!

Someone asked recently what the lil danas are up to. They will show up throughout the columns, so I decided to give them their own column as an introduction.

Which lil dana was first? Darn good question. I have no idea, but am certain it was one of four choices. On the lil dana staff, I have four quadruplet hobbits, an elf, two humans, a dwarf, and another hobbit. All except Danaish grouped together to form the Angels. They are a great support staff working primarily in crafting and AH marketing, but each has a unique personality.

One of the quadruplets was first, but getting an answer to who showed up on my doorstep first is like trying to resolve which was born first. Even if I thought I knew, they look so similar I could have been mistaken. Alphabetically, they are Dana Arodel, Dana Boffin, Dana Horn, and Dana Onar. All four hobbits were hired to do “consignment craft quests” (http://lotro-wiki.com/index.php/Quest:Consignment:_Thick_Hides), which have been obsolete for more than a year.

Basically, the hobbits would show up and pay an NPC to gather resources for far cheaper than could be bought on the AH. The only catch would be that you would have to re-show up to pick up your materials at least 40 hours later. It was quite the pain for me to stop what I was doing to go get the consignments, but to have the four sit there and wait on the mats was a perfect job for young entrepreneurial hobbits.

So, with the quest cancellation, Arodel, Boffin, Horn, and Onar went on extended vacation until it was decided that they would become Thorin’s Hall greeters. Since then, they have become very proficient at marketing and make their living buying and selling at AH.

Arodel: She is more of a nature-lover than the others. She might look like just a farmer-girl but she has good fashion sense. Arodel originally worked in Celendim, at the scholar’s enclave. She now manages the entire clothing line and advises the rest of the danas on how to dress. The quads tend to dress in festival attire, while many of the others have tended toward fashions out of Dunland. 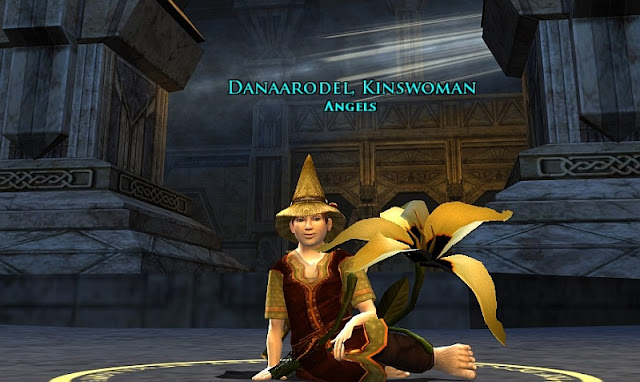 Boffin: She knows how to work a deal, watching the markets to buy when commodity prices fall and resell when she can turn a profit. Of the four, Boffin has the best head for business. She originally worked out of the Shire in Overhill, very near where they were born. She manages corporate dana-buys and sales. 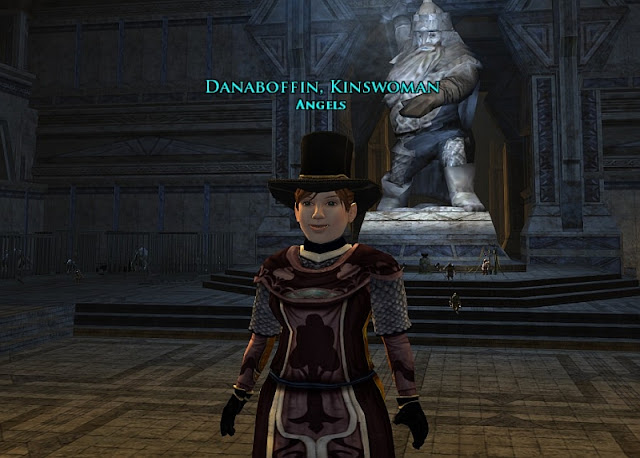 Horn: True to their first jobs, Horn kept in the crafting line. While none of the four actually know how to craft, Horn keeps up with craft related sales, which include recipes that look like that might turn a profit and crafted items from other danas when coin is in short supply. She originally worked east of Bree. 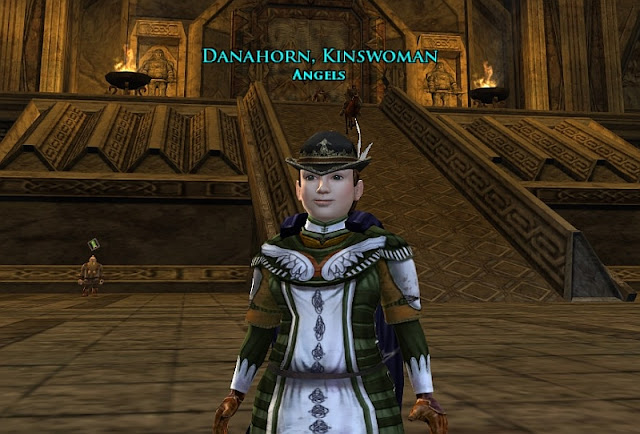 Onar: She is the festival and housing accountant. If ever I need to know, “do we have…x”, Onar will know the answer. Her job transition was easiest; her consignment job was near Thorin’s Hall. Now all four sisters work together there. 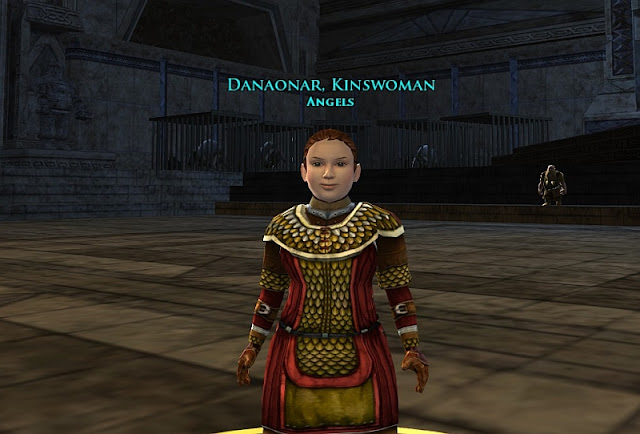 Danaish: Danaish was the next lil dana. Danaish is the only lil dana that is a Rider of Rohan; in fact, she was in the rider kin nearly a year before I was.

Danaish has been out and about and was once known as Sno White of “Sno White and the five Chees”... but that is a story for another day.

Here is a picture of Danaish’s first visit to Rivendell. She attended the Riders of Rohan 4th Anniversary party, in which the Riders rode from Thorin’s Hall to Rivendell. This shot is Danaish dancing the afternoon away with others on Elrond’s front doorstep. 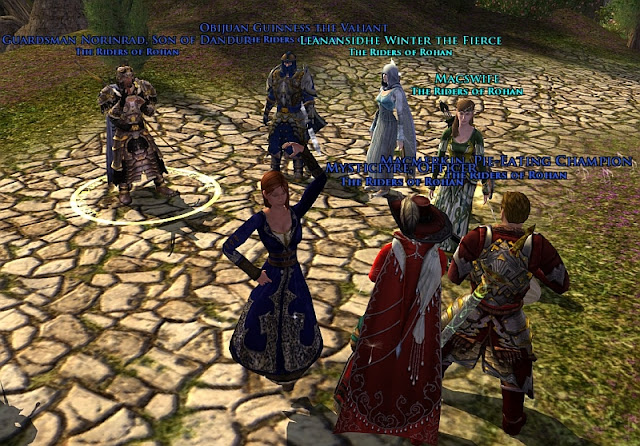 Like the other lil danas that came after her, Danaish loves to craft and loves the festivals! If you go to festival, you are likely to see her. 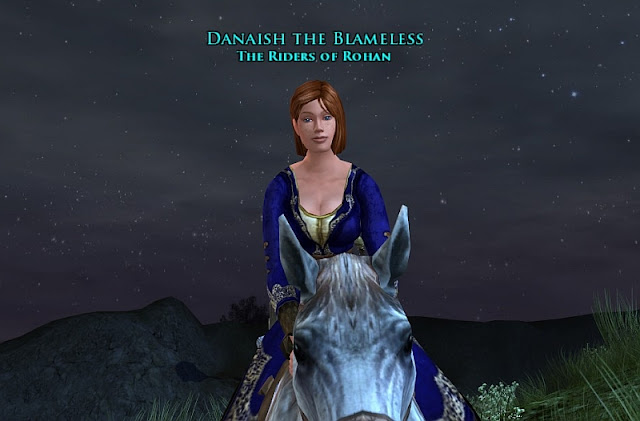 I first met Danaish when she tried to pick my pocket in Bree. Rather than vaporize her, I opted to rehabilitate her. The Riders gave her a home, I set her on the path toward becoming a jeweler, and now she is a productive contributor spending most of her time in Esteldin. Undoubtedly, she has not forgotten her Burgling roots and may someday put those skills to use.
I will tell you more about Danaish's origin down below and her ties to Archet. For the moment, I will show you one of her favorite tops I sent home from Dunland; it was a sleeveless green-trimmed blouse. 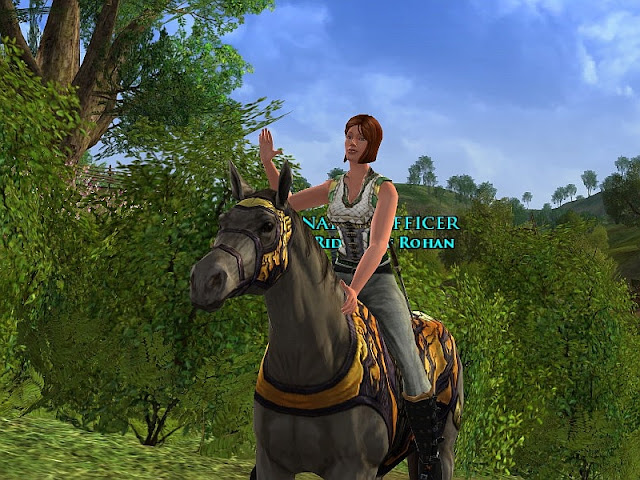 Danadelion: Danadelion is a champion and has the attitude to match. It shouldn’t be a surprise that she is the Head Angel, leader of the lil danas group. She is fearless, except when it comes to bugs. Please don’t tell her what lies within Skumfil. 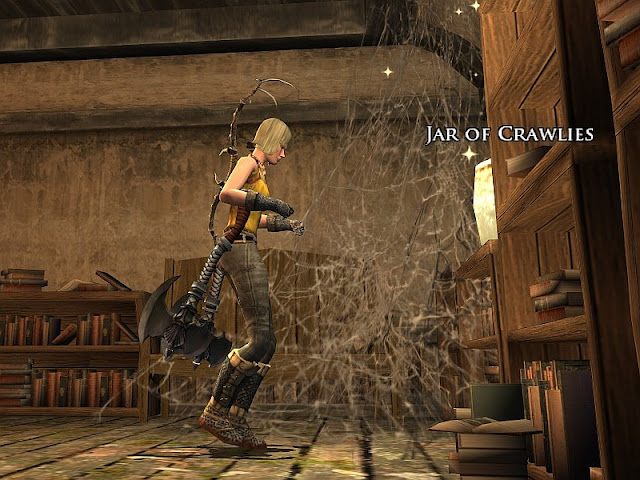 As a metalsmith, she has proven to be a dominant crafter. Like most crafters, she could settle down and make her living as a master of the forge. She is leading the lil danas to greater things, including a large house in Duillond within a few months. Here is a shot of Danadelion shortly before she organized the lil danas toward the common goal of buying a bigger house. Danadelion called first dips on the yellow star blouse from Dunland. It fits her style and attitude. 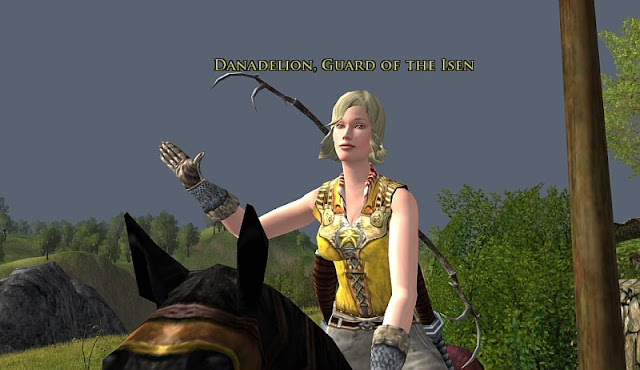 Danaszar: Danaszar is a very laid-back hunter. She is the only elf on staff and we share a common bond of having both come from Lorien. The only thing that gets a good rise out of her is the competition of seeing just how fast she can get through the festival races: horse races, Bree maze races, Shire haunted burrow races. Otherwise, Danaszar is very low-key and takes her time; in fact, she is a hunter that knows very little about porting; she rides where she needs to go. True to her low-key nature, she can often be found in a Rohirrim red outfit. 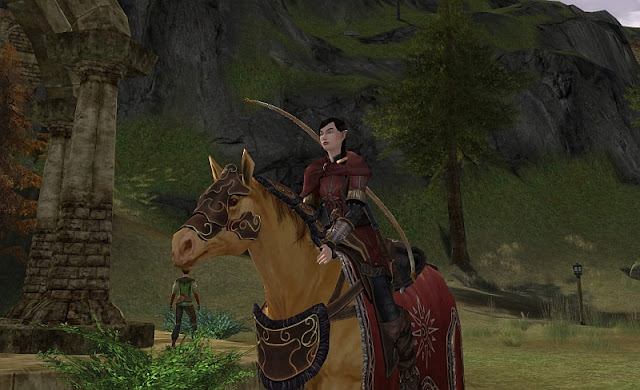 Danaszar is also good with her hands, a real top-notch wood crafter. Mostly, she hangs out in Esteldin waiting for the next festival and managing wood inventory and wood craft. 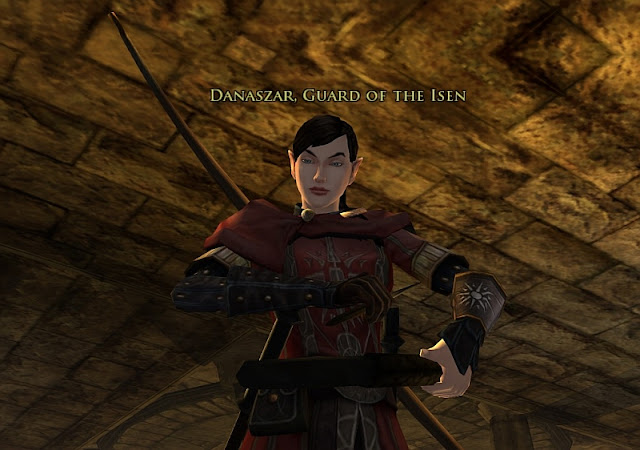 Danaclaus: Danaclaus is one of the newest members of the lil dana family, joining the danas less than a year ago. He is a jolly old dwarf and the only male on staff. He seems wise and patient, a good Guardian of the group, protecting the others.

Through experience, he has learned that one can indeed get into trouble out in this world. He and Danaszar are the only lil danas to ever meet defeat; hers was due to being very under-geared as she cut a path toward Esteldin to setup Shoppe. Danaclaus knows the moment he met his match. In the Lonelands, he stumbled across Asht, a higher level elite warg, who had other wargs around him. It was a good lesson indeed... that tanks are NOT indestructible.

Recently, as December rolled in, Danaclaus started getting very busy crafting things, and he was making lists and started checking those lists twice. 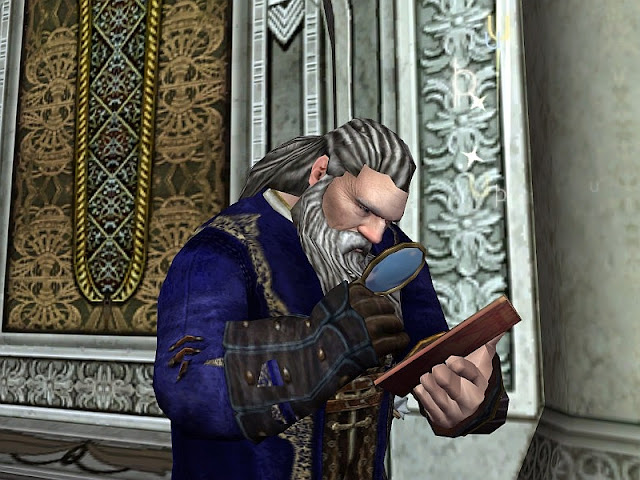 Last Delion heard, Claus took off on his Cremello pony Dasher, saying that he had to attend to some business up North for a few weeks and would be back before January. 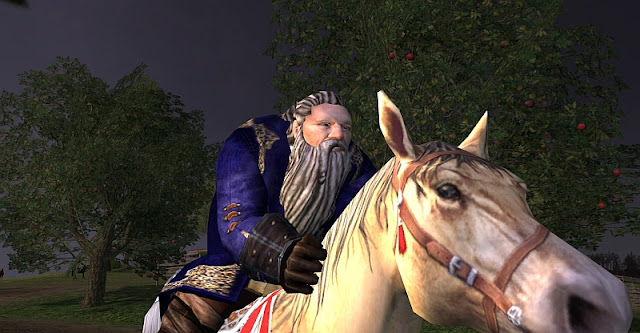 Danadalyn: Danadalyn really joined the lil danas full time around Fall festival. She really livens up a room with her stories about adventures in Middle Earth and likes to play games and jokes on others (Fun Fall Festival, Friends!). I am told, she is quite the performer, getting the patrons of the Prancing Pony to pay attention. 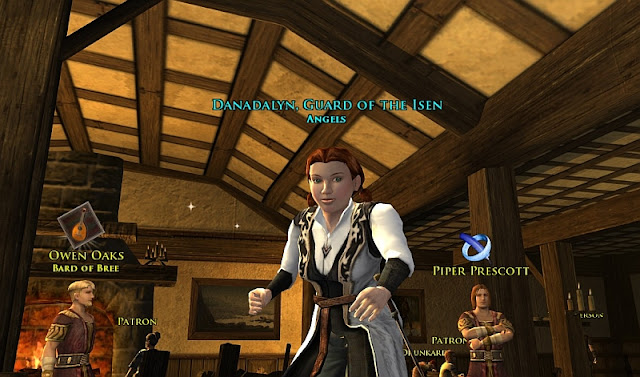 She is really kind to all she meets and will talk to anyone, sheep included. 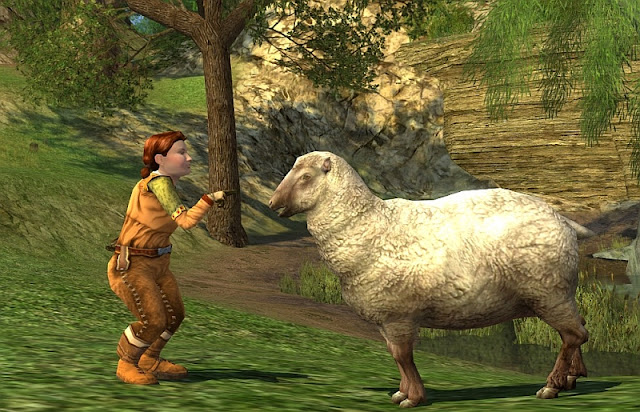 I taught Danadalyn to ride recently; she has taken to it like a hobbit to food. With her rise in skill, like the other lil danas, she too got to buy fall festival steeds and is looking forward to winter festival. Here she is on a Rohirrim steed. She chose a white long jacket from the clothes I sent back from Dunland. 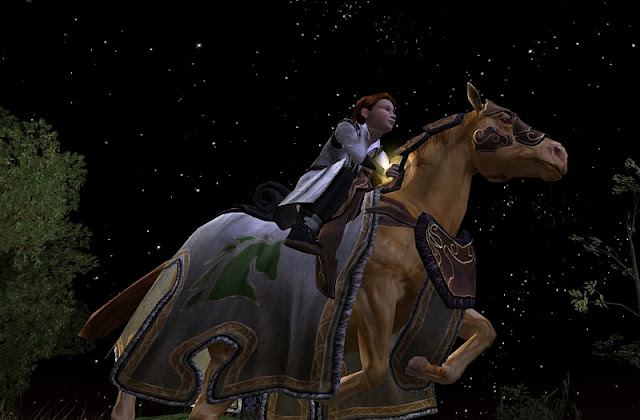 Of all the lil danas, Dalyn is the one I understand best. She is no rune-keeper but is close enough that I understand her. She knows when to hit, how to hit, when to run, and when and how to heal. She is an adventurer after my own steps. Here is Dalyn facing down a bear near Bree; fearless right? :) 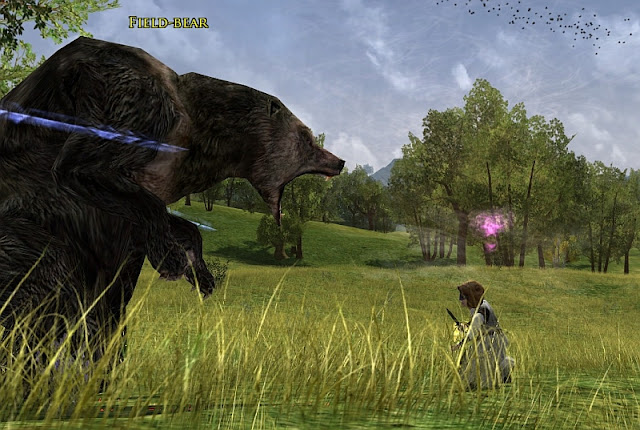 Archet Ties: I have known for a long time that Danaish came out of Archet, but I didn’t really get the full story until I hired Dalyn recently.

Danaish, now a teenage girl, is or was the daughter of Ned and Peg Pruner of Archet. Before Archet’s burning, Ned was the jailor of the settlement and his wife Peg was a local supplier of simple goods. They made a decent living in the small community just northeast of Bree. I won’t go into the entire story of how Archet burned, many of you know it and I couldn't do justice to Dalyn’s ballad if I tried, but the gist was that Danaish’s father was killed. Dalyn found his body while following Jon Brackenbrook’s team into Archet as it was burning. Danaish’s mother hasn’t been seen since the fire and is presumed dead. 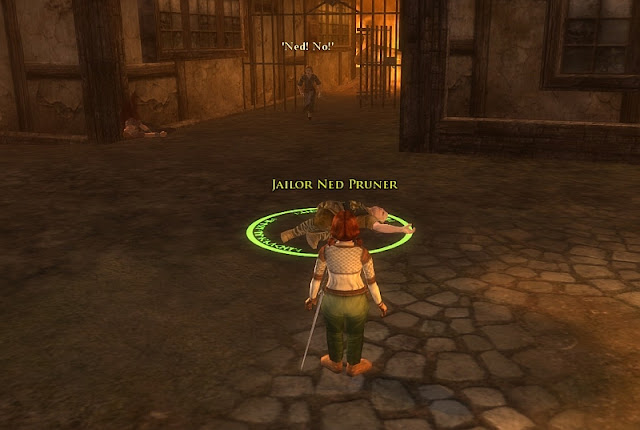 Danaish escaped the fire, but was haunted by the nightmares of carguls. She turned up in Bree a year later gaunt and starving, trying unsuccessfully to become a pickpocket. 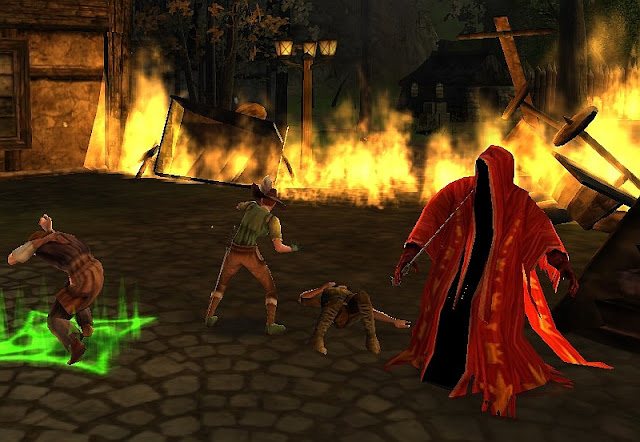 Danadelion was a guard working in Archet for Captain Brackenbrook. When Amdir betrayed the Captain, Delion cowered in fear amidst the fire and watched the decimation of the town and death of her friend. After Archet, she started working as a guard against the Blackwolds in Bree and eventually became good enough with blades to venture forth and do more. She takes personal responsibility for Danaish, undoubtedly feeling shame related to her failures at protecting Danaish’s parents and the Captain of Archet. 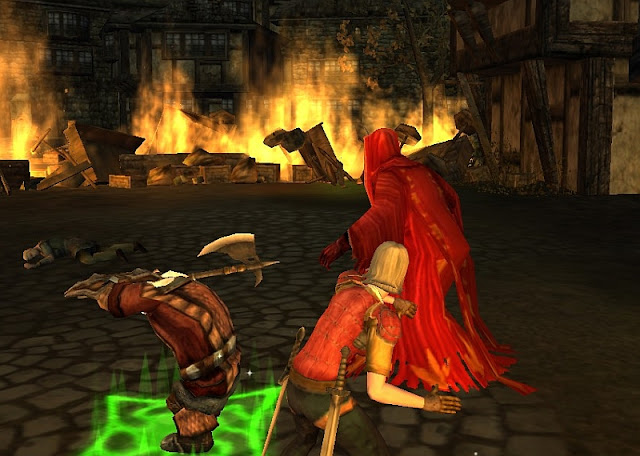 As for Dalyn? She persevered to tell the stories of those who fought and died at Archet. She knew them all or seems to be able to fill in details with plausible stories. Whenever, the ale starts flowing in the local taverns, rest assured, you just might catch Dalyn telling the tales of Jon Brackenbrook, Atli Spider-bane, Constable Thistlewool, Cal Sprigley, and Ned Pruner. 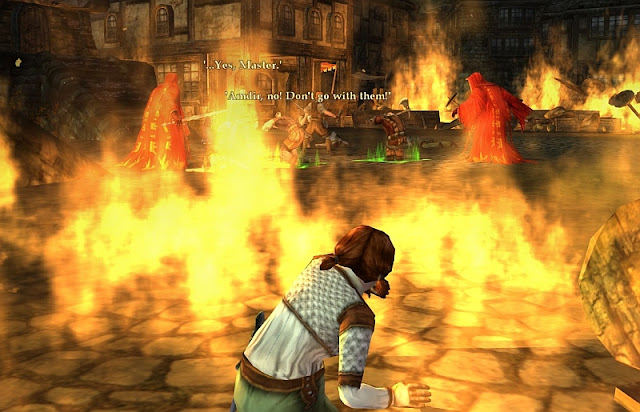 If you like festivals like I like festivals, you will most likely see the lil dana team around. Feel free to say hello! Soon enough Delion will get her way and move the team out to the country... but that is another story.

(I love comments, and kept the comments from the original posting, reposted @ final-comments)
Posted by Unknown at 5:12 PM