Welcome to my Tailor shoppe!


At week 4 since RoI release, my favorite craft areas are still absorbing the overwhelming amount of new crafting and gear content of the Westfold, the Tier 7 level. I am sure my hero and namesake Darzil has been inundated with information; such is the weight of running a site dedicated to crafting and being really good at it (check out Darzil’s guide at http://northshield.co.uk/LOTRO/).  So, I want to try to do my part by showing you around my tailor shoppe.

Ok, let’s break it down. I will show you everything in the Westfold catalog. This post is a bit long, but it should tell you everything you want to know about what is available and what it costs.

As a tailor, I make (1) Light armor, (2) Medium armor, (3) Cloaks, (4) Burglar signals, (5) Captain Armaments, and (6) Legendary items (Burglar tool-bags and Rune-keeper rune-bags).
The only things you will find in my shoppe are critically made items; if it isn’t the best of its kind, it does not bear my name and is trashed. Now on to the details!

There are 6 pieces in the Light and Medium armor families: Shoes, Gloves, Shoulders, Chest, Helm, and Legs. I will list the variations in that order.

Materials: There are only a few key materials required for each piece…

Header Summary of sections below:

Level 66 Shoes! The Shoes come in Light and Medium armor styles. Be sure you know your size.
The level 66 shoes and boots are sewn with 4 Large Hides and rubbed with 1 Drop of Birch-tar. The success rate to make a great pair of shoes is 60%. If you have the materials, I guarantee I will not fail twice. 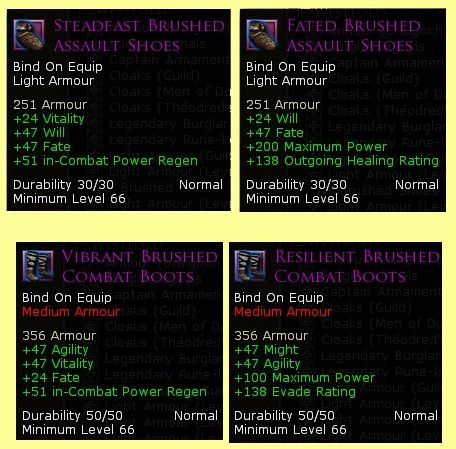 Level 68 Gloves are stitched with 8 Large Hides and rubbed with 1 Drop of Birch-tar and 2 Lumps of Rich Wax. Choose from Light or Medium armor types. Same 60% success rate; same guarantee. 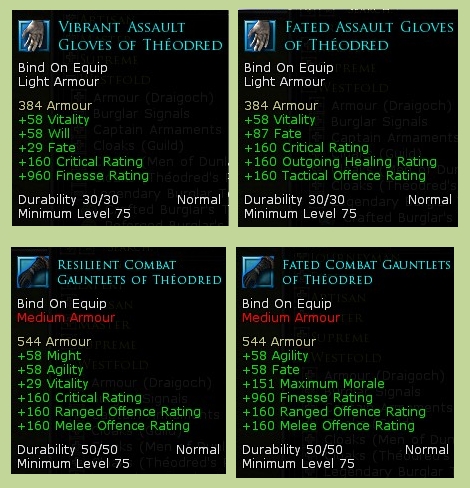 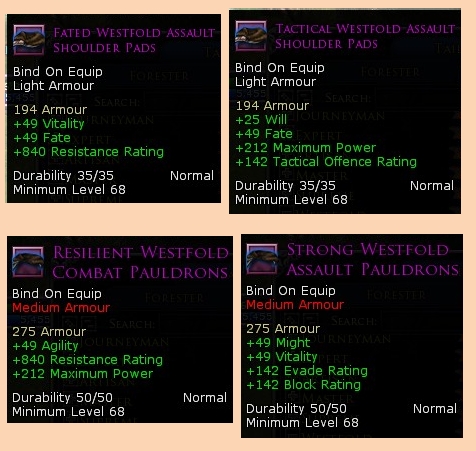 Level 70 Armor of the Dunland... What nice pieces those are. It takes a special tailor with renown with the folks of Dunland to be able to make the finished leather for chest pieces. The materials are getting a bit pricier, but we want a nice chest piece when fighting those stabby uruk-hai. 16 Large Hides, 1 Drop of Birch-tar, 5 Lumps of Rich Wax. Light or Medium choices. 60% success rate. 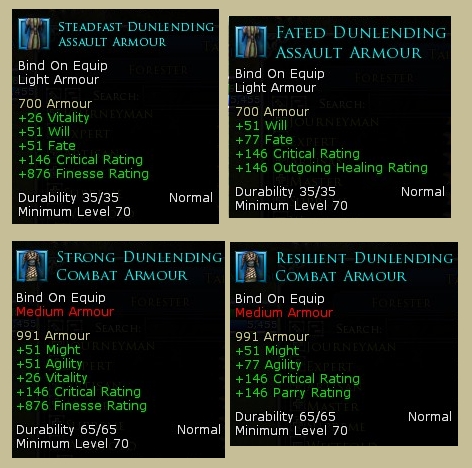 Level 72 Hats… Of course, like the chest pieces, the hats and leggings require finished leather known only to the Dunlands and their appointed tailors. 16 Large Hides, 1 Drop of Birch-tar, 6 Lumps of Rich Wax. Light or Medium choices. 60% success rate. 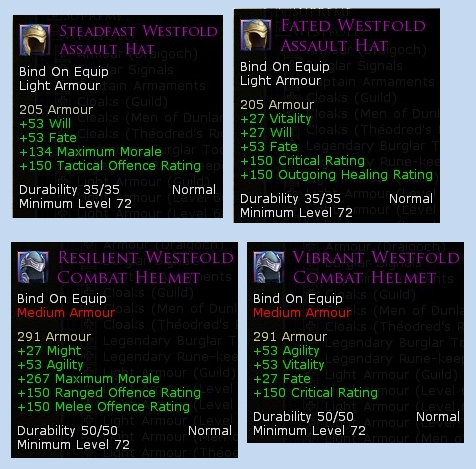 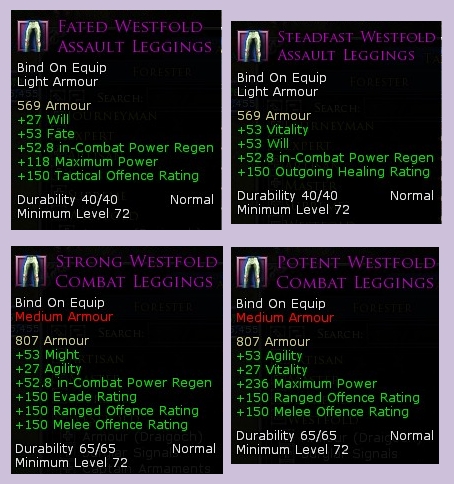 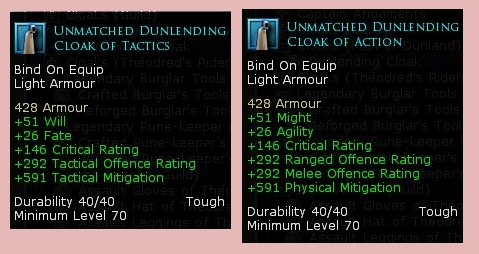 Level 75 pieces: And now for some special items only made well by Guild tailors…


All of the level 75 pieces are made with Guild tailor patterns, a collection of Hides, and 1 Cracked Rhi Helvarch Sigil. If the piece was made with just the Large Guild pattern that has a 1 week cooldown, it would require 52 Large Hides and 13 Lumps of Rich Wax. Under pressing times, tailors can make these level 75 pieces with Small and Medium Guild patterns as well  to output more high quality armor. Of course, splicing patterns comes with a price.


The success rate for level 75 Guild-made armors is 100% and there is little better than these crafted armors. Many of the crafted armors are the best in class… other competition includes Moors armor, “barter mark” armor, some Skirmish drop armor… did you read my post “Best laid plans of elves and rune-keepers “?


The down side is the 1 week cooldown... So Patience is a virtue. I will accelerate as fast as I can fill orders splicing together the smaller patterns until demand drops. 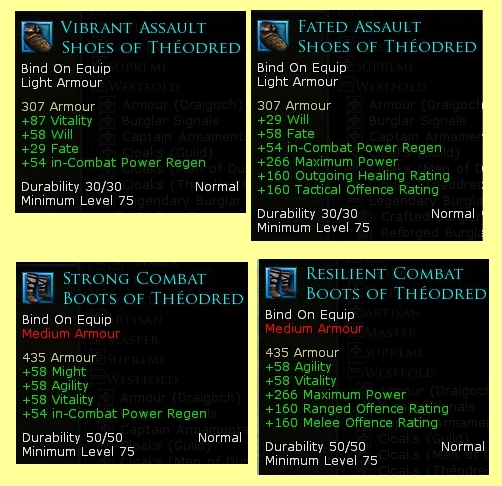 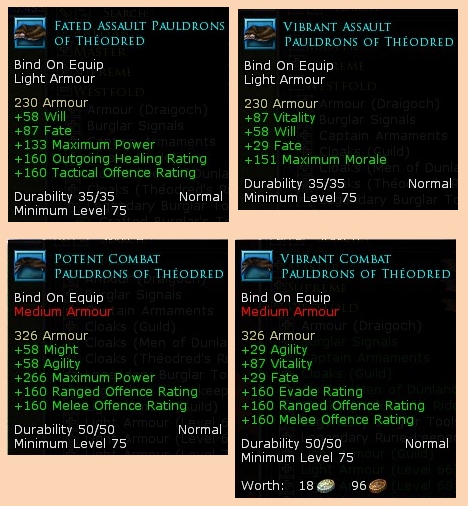 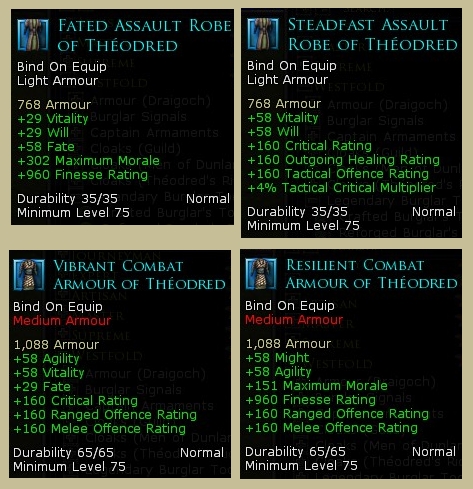 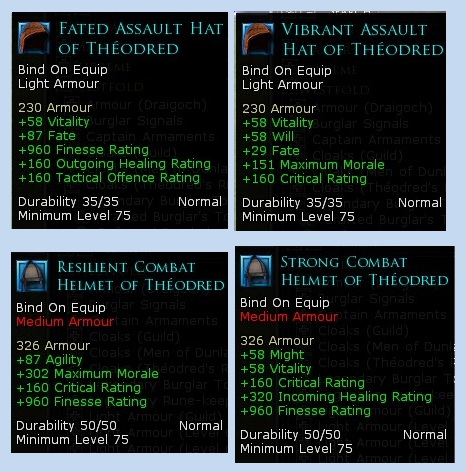 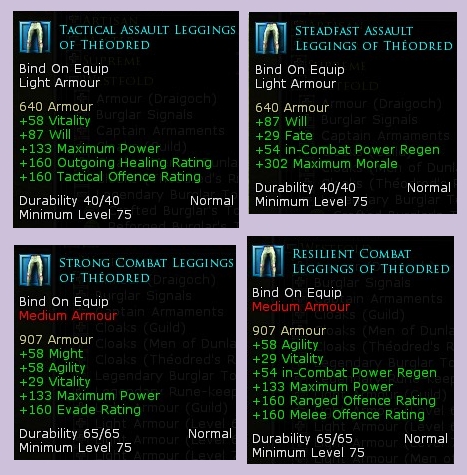 Level 75 Dragon Cloaks: Alrighty now for something really special. Only the tailors with renown in the Guild and with Theodred can make the best cloaks… Here is a selection of 4 special cloaks. Each requires 3 Draigoch scales, 32 Large Hides, and 12 Lumps of Rich Wax. 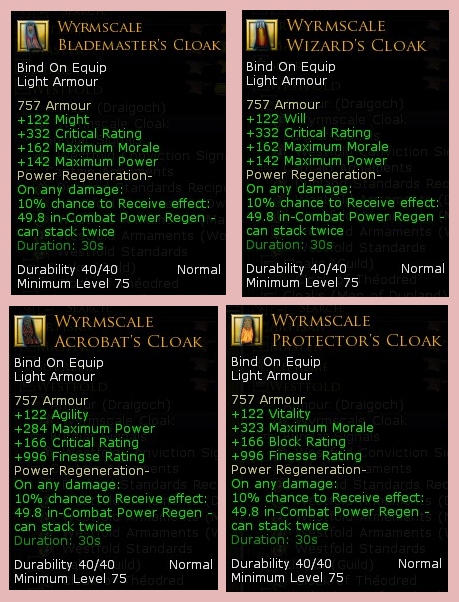 My first draft of this tailor catalog yesterday was written with no expectation of having a Dragon cloak any time soon. With some super-great leadership, awesome healing, timely FMs, and good teamwork last night, 12 Riders went into the Dragon's lair and had Draigoch BBQ. I am still in a little shock this morning, but that is a story for another time. For now, I give you a picture of the Wyrmscale Wizard's Cloak. It is even sharper and more vibrant and glowy than this picture does it justice. 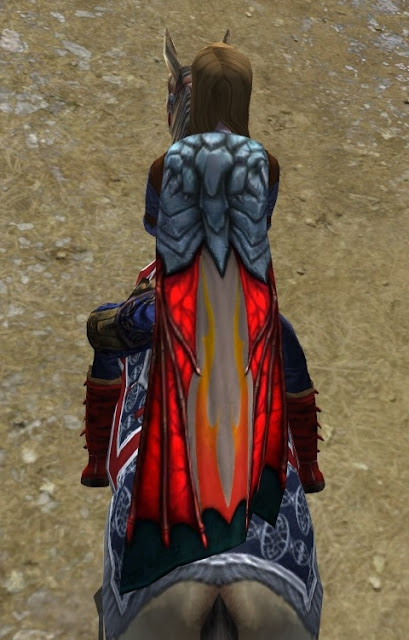 For the Burglars: Not being the stealthy sort, I couldn’t tell you how or why Burglars do what they do. I do know that some of my dear friends are Burglars and they make groups magical. I offer 4 different level 75 Burglar Signals. Each requires 12 Large Hides and 4 Lumps of Rich Wax. 100% success rate. Easy peasey; might as well get all four signals.

For level 70 Captains: Similarly, everyone loves captains. For level 70, I can sew either Dunland Banner Standards or Herald Armaments. The Standards come in a variety of colors to bolster and inspire your group. The Herald Armaments are all the same, but you get to choose for whom you would like them sewn… Man, Woman, Dwarf… then subdivided into Shield-maidens, Swordwomen, Maid-at-arms type armaments. Just ask to see a selection of patterns. 8 Large Hides, 1 Drop of Birch-tar, 2 Lumps of Rich Wax. 60% success rate.

For level 75 Captains, I can sew Westfold Banner Standards. Captains make everything better. We want you to be as uber as possible so the materials for this standard will be the cheapest thing you own at level 75. 12 Large Hides, 1 Drop of Birch-tar, and 4 Lumps of Rich Wax. 60% success rate. 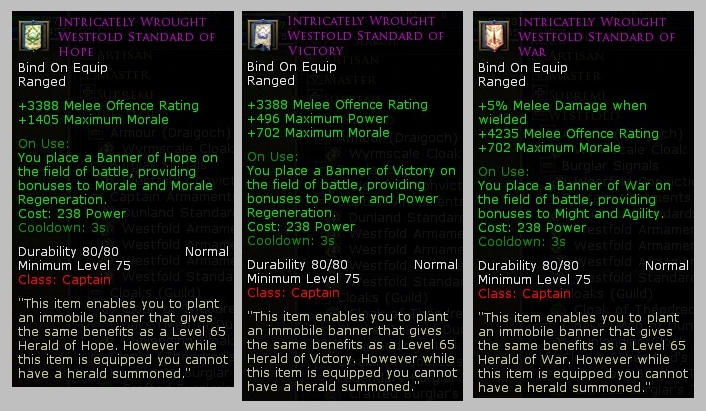 
The 3rd Age Crafted bags require 3 Legendary Fragments, 24 Large Hides, 3 Lumps of Rich Wax, and 1 Cracked Rhi Helvarch Sigil. As far as I can tell, these bags are fairly standard and are identical to any other bag you would take off the enemy. I won't make it unless you give me a good reason why you want one.


The 2nd Age Reforged bags are the best I can make currently. Each requires 5 Legendary Fragments, 32 Large Hides, 12 Lumps of Rich Wax, 1 Cracked Rhi Helvarch Sigil, and 1 Worn Symbol of Celebrimbor. These are the ones you want. It takes me a 3 day cooldown to make one and I would be proud to sign any you have commissioned.


Hopefully, this newly commissioned one will serve Dainger well in his future adventures. 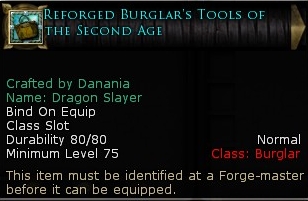 (To my great delight, Crafter fans tuned in to give comments @ final-comments)
Posted by Unknown at 8:52 AM