A column about Draigoch, you say? I don't want anyone to be surprised by the title and think I made you see pictures of Draigoch against your will. Don't scroll down this column if you are trying to avoid seeing him. I had been holding out by not posting pictures of Draigoch until more people got to see him, but now that he has been open for visitors for over a month, now is the time. We are all good then? Let's go!

The first thing to know is you don’t just waltz into Draigoch’s lair with no preparation. There is a chain of quests. It is nothing difficult, but you wouldn’t want to be in Raid about to enter and realize that you are magically barred from entry, because you didn’t do the intro quests. If I am recalling correctly, the chain starts at Nar’s Peak with the quest, “There is gold in the hills”. It ends with the deed completion of finding the cave entrance. EDIT: I've been told I am not remembering the start correctly! The into quest begins in Galtrev, and directs you to Nar's Peak!

One thing for sure, the cave is a bit dark. The pictures didn’t turn out as well as I hoped so I am adjusting some of them to show you better what "I spy with my elven eye".

INTRO: After you do the Intro quests, you have found Draigoch's lair. Now, you can go in.

Got your friends with you?? Draigoch is awake... 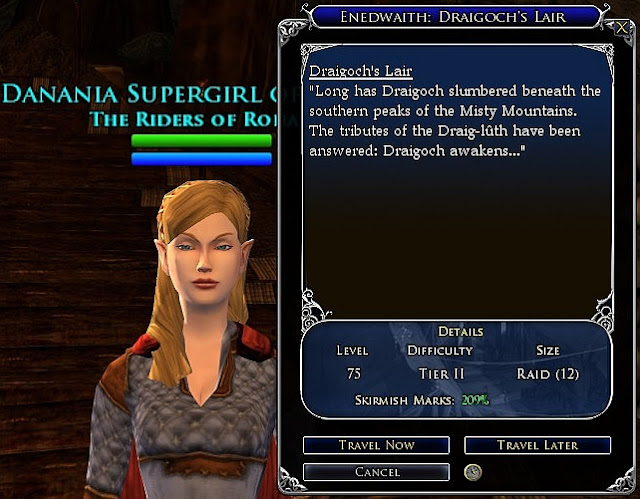 Captains don't get scared do they Beorhir? Oh, I'm terrified. That will definitely keep me more alert, and hopefully, more alive. I'm not sure that Draigoch wants us to go in and take his stuff. Bilbo once told me about the time he ended up in Smaug's lair. I wonder if he still has that ring of invisibility... PHASE 1: The Gauntlet. Ok, now you made it into the lair. Undoubtedly, Draigoch isn’t very happy about his home being invaded by a bunch of upstarts. There are 3 phases. For phase 1, just making it safely through the tunnels to where you can taunt Draigoch has proven to be a battle of will for some wannabes. He is looking to kill you before you start.  The fight actually reminds me a lot of the turtle of Filikul. If you have good leadership and good teamwork, it can be easy. If not, well… it will be a long night and a likely loss.


Oh boy. Mid-way through the gauntlet... Nidrod and I are hiding from Draigoch's view, looking down on him. Nidrod has been here once before... I'll stick close so I don't get lost. 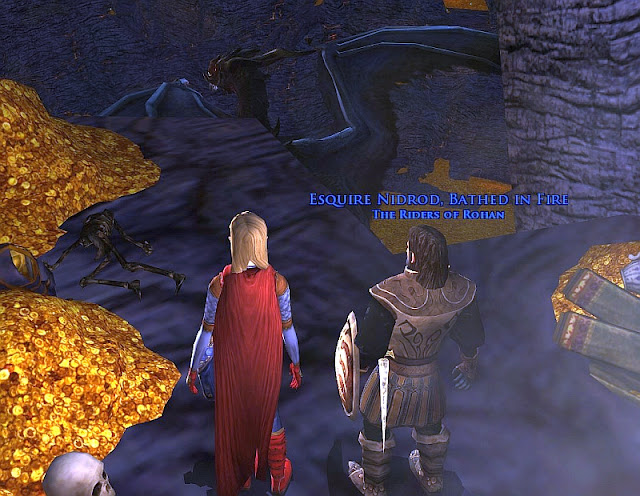 Oh geez. Don't look over here... Draigoch can smell the intruders and is looking for someone to burn to a crisp! 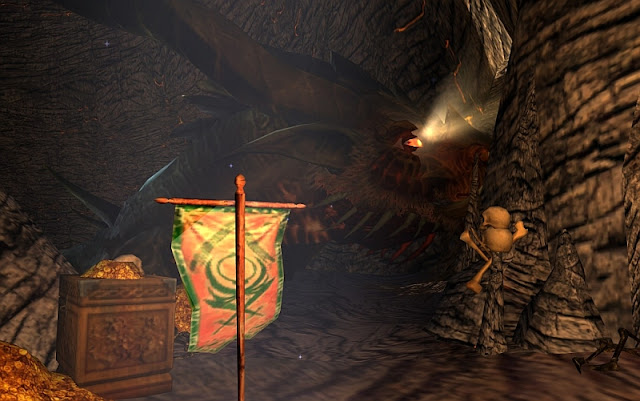 After 2 visits to Draigoch, one with an unsuccessful pug and one with a full 12-person corps of Riders, I am by no means an expert of any sort. I just like to take pictures. Actually, I am not even going to pretend to advise you on the details of the fight; I’ll leave that to the experts.


Here is a shot from the pug I went on. It was one of the first shots I had of just how big Draigoch is. I didn't get the full effect of it though until I enhanced the image and pulled out some of the shadows. Lynrial was teaching others how not to become dragon-food; she is the brunette in front of me with a skull over her head. 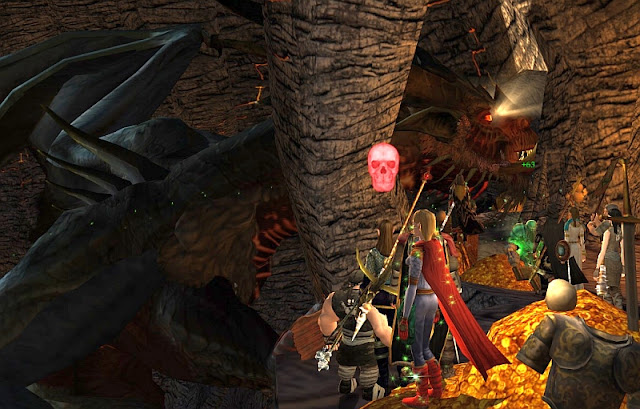 Haha. Just sit here quietly... he is way over there looking in the tunnels for victims. I'm just glad to be here and not over there. 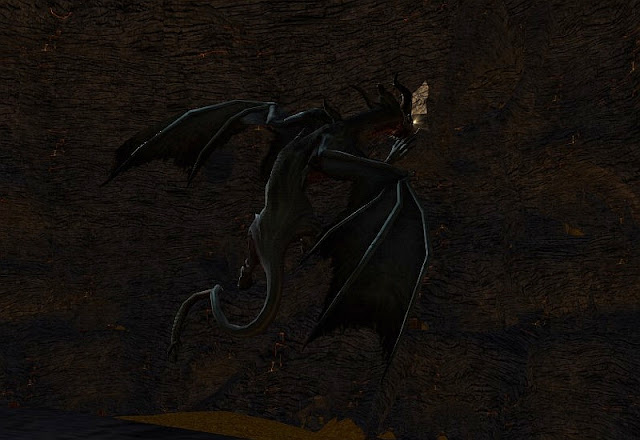 When I saw him launch up and blow fire during the fight, all I could really see was the jet of flames. I stripped the shadows out of this shot to show the ferociousness that is Draigoch. He was none too happy that he hadn't decimated us all. 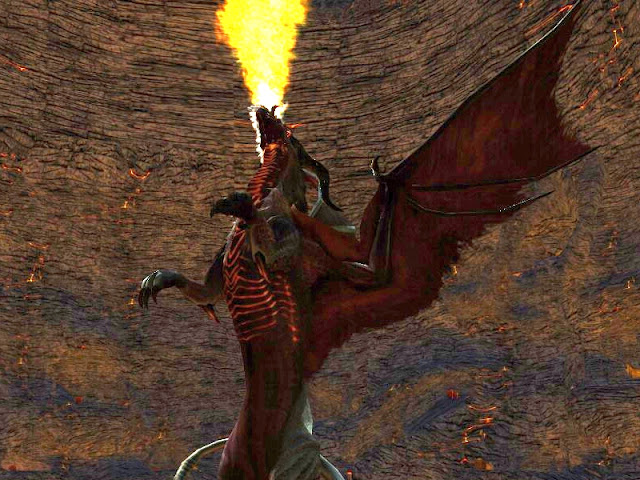 Interlude... No one touched Draigoch's loot chest, right? I think he might want to parlay with us... Undoubtedly, he believes that we will be easy to dispatch. The poor thing... he must not know the power of the Riders of Rohan. He soon shall.

Helloooo, Mister Dragonnnn! We are already safely nestled into your lair... Ready to turn around and see what we have brought for you? 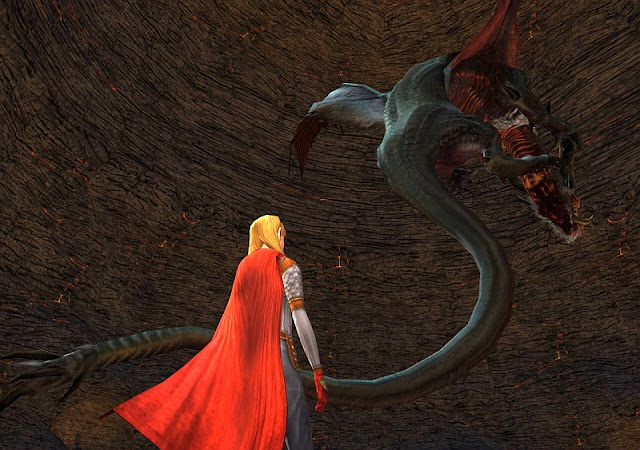 Hi there! A big dragon! Now for a profile shot... 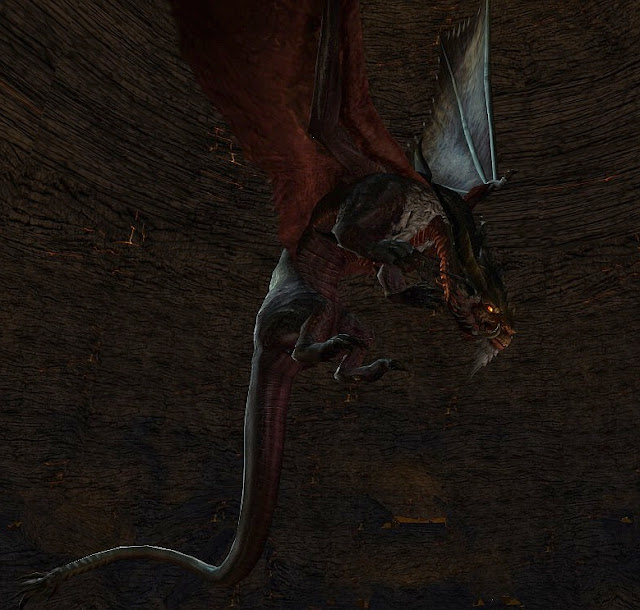 Wow! You are a handsome dragon aren't you! Smile for the picture! 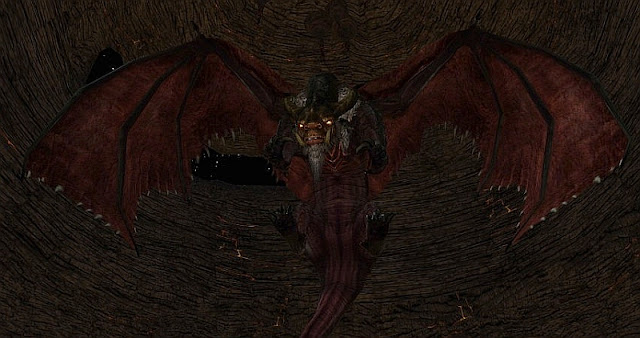 Danania: "Would you like to give me some of your treasure, or you want us to take it from you forcefully?"


Draigoch: "Bold words from such a pip of an elf. You want to fly up here and say that again?


Danania: "Soon enough mighty dragon. But I think it is nearly time for game-on." 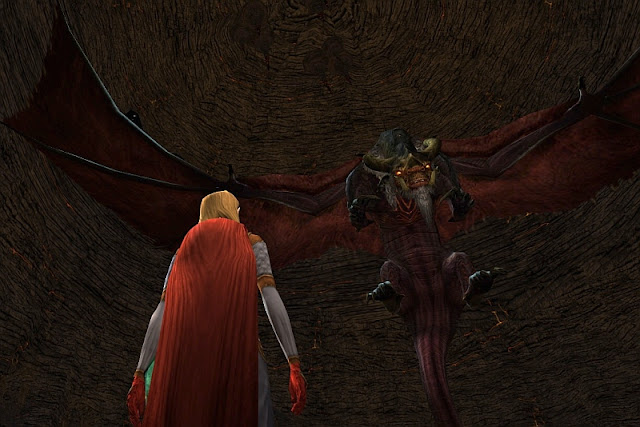 Danania: Silly dragon. You are grinning now... sure, you burned my cape last time I was here pugging and left me to go home empty handed. This time I've brought a whole team of Riders. Lynrial? Byrane? Menelchol? Norinrad? Dandur? Seraph? Nidrod? Yeah... starting to remember them aren't you. So sly, thinking that only 12 will to be an easy challenge for you. You better bring it, because we will be. 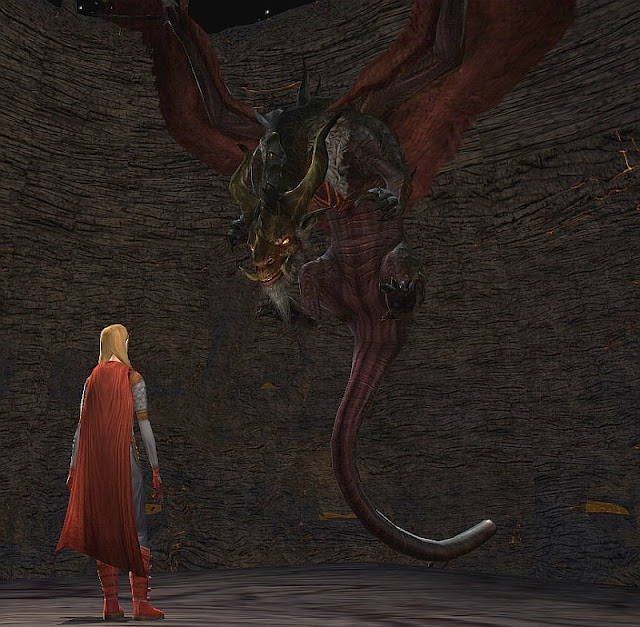 Draigoch: You are all chatter, lil word-smith. You hold no power over me!


Danania: What you say is probably true. As one, I am no great threat. As a team, we will take you out. Besides, look to your left up on the ledge mighty dragon... Lynrial and Byrane, both Bathed in Fire by your blood, stand at the ready. From here on out, your moments are numbered. 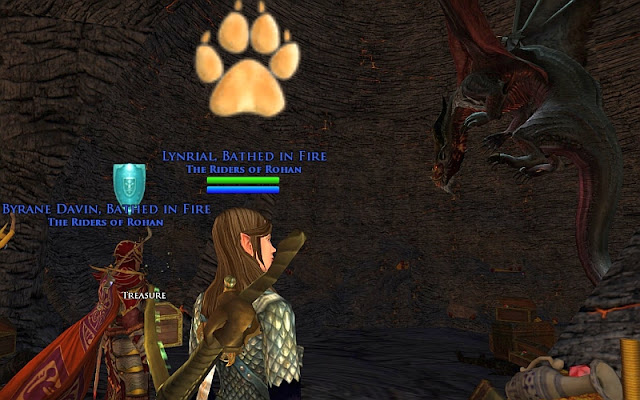 PHASE 2: It is on. Our group is preparing for phase 2 assault, the fight against the dragon feet.

Ok! Let's get to work! How do you eat an elephant? One bite at a time. How do you take down a dragon with 9 million morale? It starts with the first shot. Take out his feet; make him "easier" to hit. 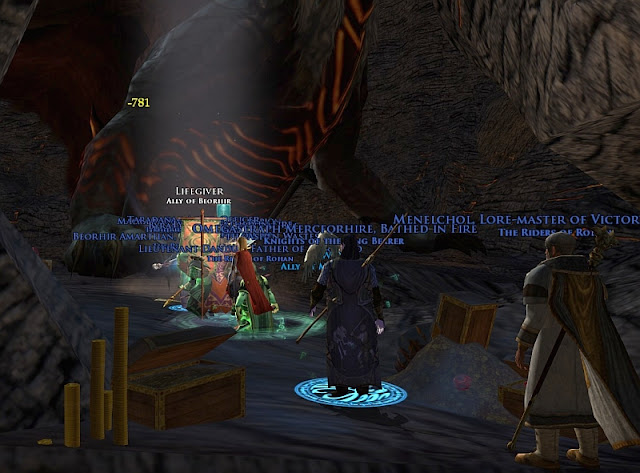 Woohoo! Success! We stepped on his toes enough that he fell over! Let's go get him! 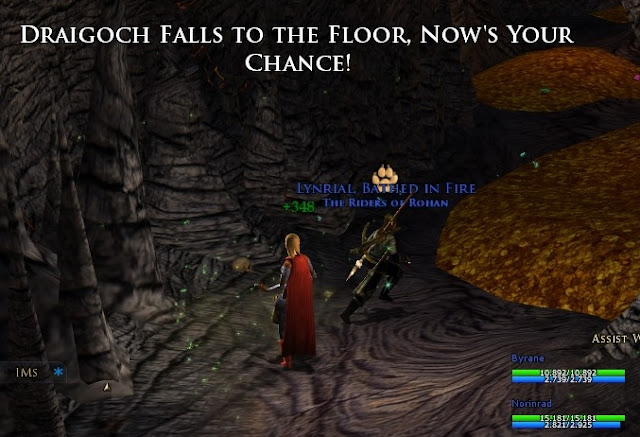 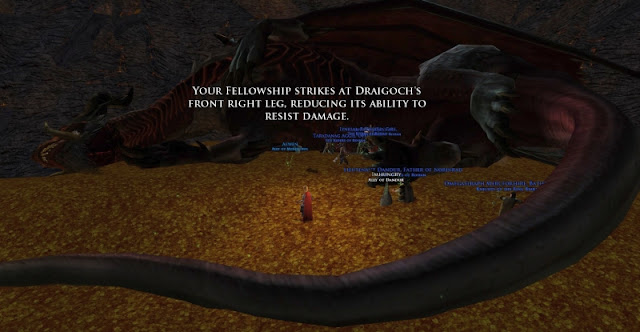 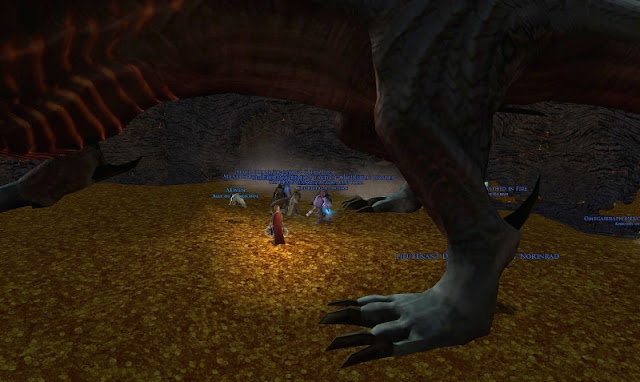 PHASE 3: Phase 3 involves being down in the lair, fighting under the great dragon. Don’t get stomped! Don’t get burned to a crisp! Show off your teamwork prowess! 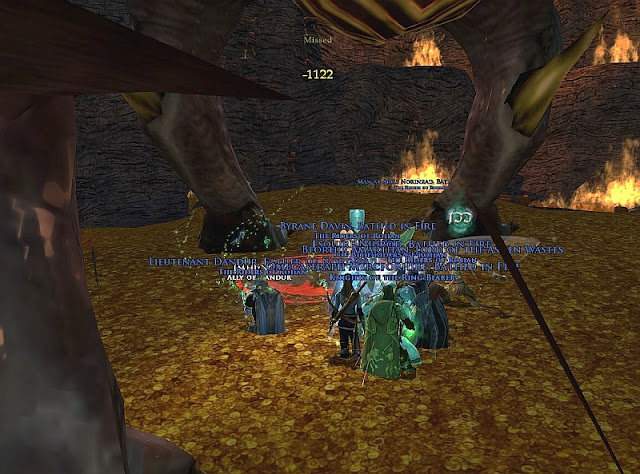 Winning!
With that last round of strikes, Draigoch is gasping for air. He is going down! Run! Run! Do not let him fall on you or it is good night Mini! 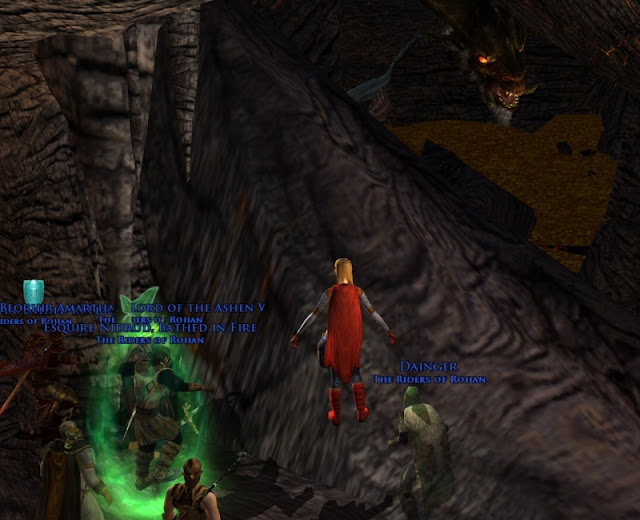 Doing the victory stand! Rest now, dragon. If you just lay there, we will stop stabbing you, take a few pieces of loot, and get out of here. 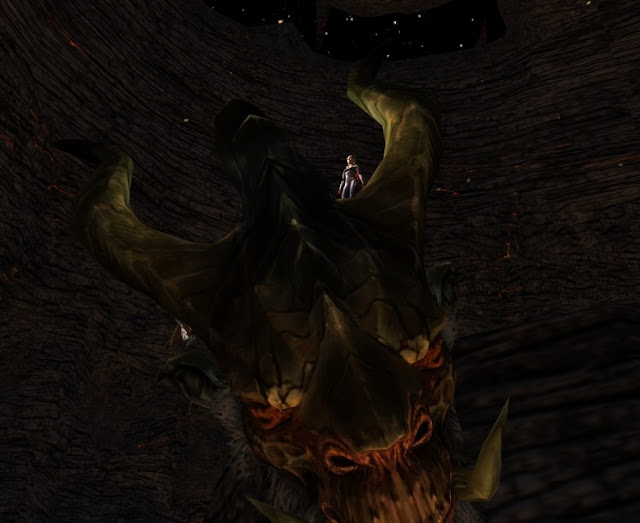 Teamwork! We stand together atop the mighty dragon. 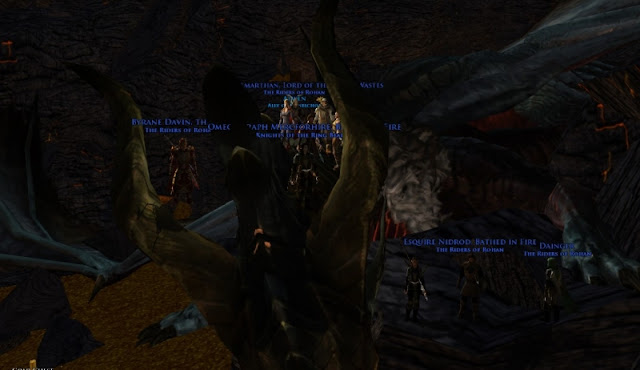 Teamwork! His head is so massive, I couldn't get an adequate shot of the team; so here is the other half of them. 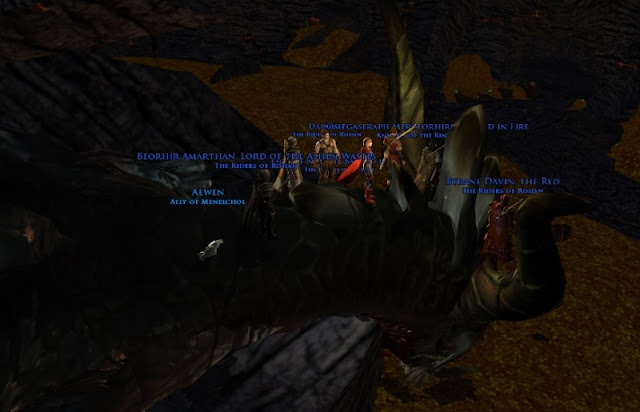 Hehehe. This shot was one of my favorites. 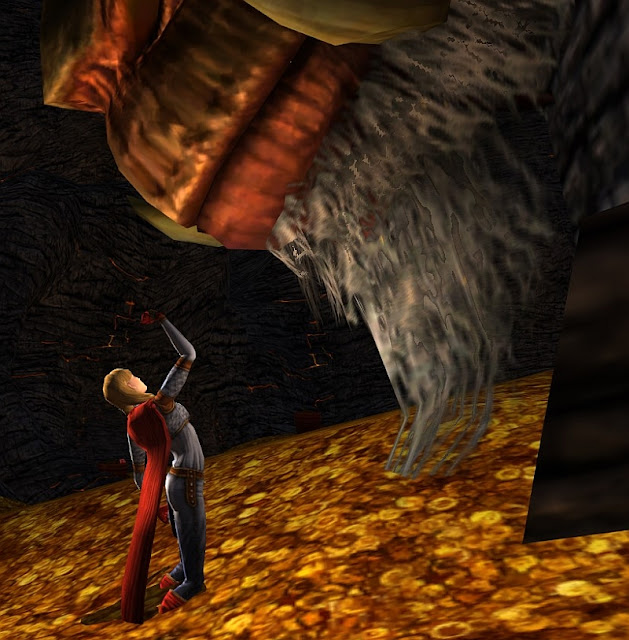 Conclusion:
For beating the dragon, you are awarded lots of goodies!


First, if you beat Draigoch while using the 12 FMs (challenge) and on 12-person (tier 2), you take Draigoch's title "The Red", the deed completions, some Turbine points, and a Worn Symbol of Celebrimbor to make a level 75 2nd Age LI. 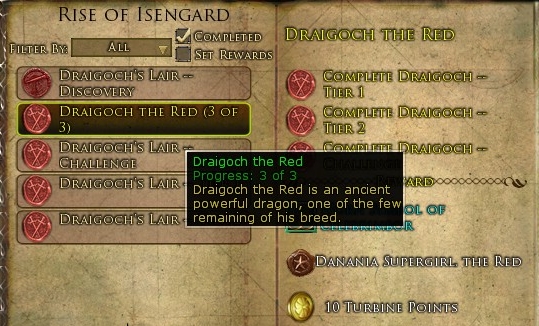 Woohoo! Here is most of our team from the night! Left to Right: Dandur, Thetaseraph, Macmerkin, Nidrod, Byrane, Beorhir, Menelchol, me, Norinrad, Lynrial.   Dainger and Taradanag must have been carrying the enormous housing item or something... what?? You don't see the housing item?? It is right behind us. Ok, ok... look up in the next shot!

Yeah, it is a life-size stuffed dragon! It is hard to get a good shot of it because it is so large! To see it in person, visit the Riders of Rohan kin house near Thorin's Hall! 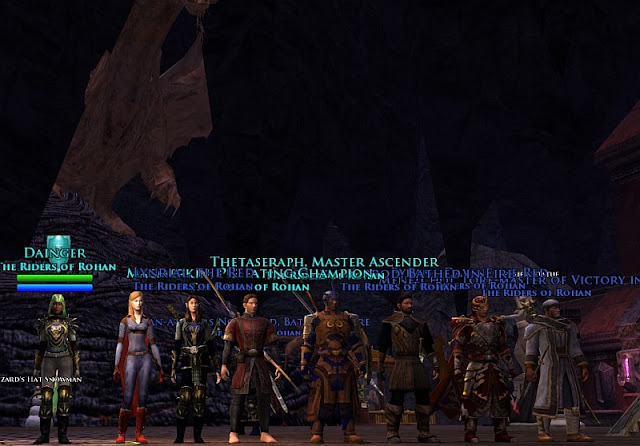 If you crane your neck just right, you can get a good view of just how large it is. Also, note that it is too big to fit in the Thorin's Hall homestead! The dwarves really must come expand out the top of the cavern to fit our trophies better. Dandur shoved the wings in between the stalactites, but it is a tight fit at best. Still, a beautiful trophy for the Riders of Rohan.


UPDATE 05/16/12: I got a much better shot of the statue of Draigoch at the lil danas house (draigoch-statue-lil-danas-moving-day) 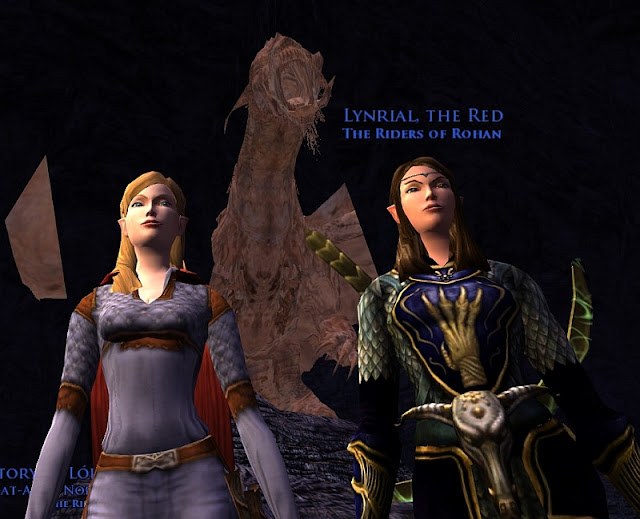 And for the 12, there was nearly enough very good loot so that everyone got something really nice, from Worn symbols for 2nd age level 75 LIs, to special class gear tokens only dropped by Draigoch, to special raid-type gear, to ... what I got, scales for a Wyrmscale cloak. Certainly, it is the nicest thing I own. It is the first time I've considered permanently breaking out of my standard red Supergirl cape in years, and at least for the foreseeable future, I will be Supergirl the Red, at least in cape. Here is a shot of me riding my Cremello Szand steed up on the Hill, everything bright skies and rainbows. It is so lovely, and it even glows in the dark! 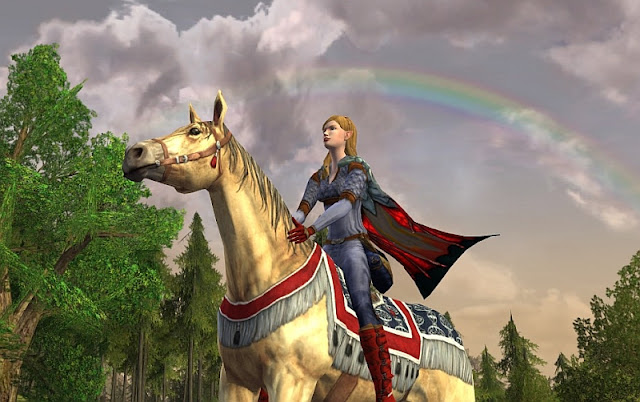 (The original posting of this story had the most active comment response of the first ten. saved and cherished @ final-comments)
Posted by Unknown at 3:37 PM