Oh-ho! 2014 and another Spring Festival cometh! Spring Festival holds a dear place for me because it was the first event that was in progress when I arrived in Celondim those many years ago. At the time, I was such a noob; I had amassed 7 Spring Leaves for barter and had no idea how one could earn so many. I didn't realize that the quests were so repeatable and I could come back the next day and do them again! Live and learn.

The new things for this year's festival include 3 new cosmetic outfits, the new horse and warsteed cosmetic, and pet Shrews! Oh yes, pets are in vogue apparently now, lol! There is one huorn from Fangorn (which I haven't gotten yet because I have been festivalling since Fangorn was released), 6 chicken from Hobnanigan's (hobnanigans-fun), and now 4 shrews from this Spring Festival.

I would guess that the Spotted Shrew is the easiest to obtain since you have several hundred chances at picking up Flower Patch nodes within the hour long quest, and the other quests are once/9 minutes, once/day, and once/9-min-if-you-win-enormous-quest. I neglected to take a picture of the two shrews I've gotten so far, so Danaish shows off her Spotted Shrew here. He looks very happy that Danaish always carries food on-hand.


Warsteed of Spring Gardens (aka Trellis-weave) - Default: Breaking with tradition of naming the warsteed cosmetic similar to the actual horse, this spring's warsteed cosmetic is called "Trellis-weave". Yes, this is the one that looks like the horse. The one-piece Trellis-weave Caparison is very very easy to barter at only 20 Spring Leaves. Here it is in Default colors.

Trellis-weave - Crimson, dark chestnut hide, black chestnut hair:
The Trellis-weave dyes very well so take your pick on which color you like. Here is Crimson with a few browns for the horse.


Trellis-weave - Gold, sorrel hide, seal brown hair:
Oooh. Ok, yes, the Draigoch statue offset the picture nicely, but I do like the gold and sorrel and the seal brown hair which looks very golden!


Spring Festival lasts until June 3rd so there is plenty of time to get any horses you desire and possibly rack up some shrew pets, cosmetics, and other goodies. Have a great time and I'll see you soon! :)


This year is flying by... while I have read that lotro is not putting out "major" new content soon, I am very content with that as I can barely keep up with the minor content updates. Fangorn? Yes!... it is an update, but I think it came out the same week as the Anniversary festival, then as I was getting ready to go toward Fangorn, I got drawn in to a few raids and other activities, not to mention that the stat calculations were changed and I spent time playing with "new lotro math", plus there were new quests in Trollshaws to see (yes, they were for level 40-ish but I don't pass up any quests ever), and then along came Hobnanigans!

I will get to Fangorn eventually, but I wanted to recap some of the fun from Hobnanigans. It will be a short duration mini-event that pops up periodically (One rumor I read was a few days each month; we shall see).

So, in short, it is a game of soccer (or hockey) where your team tries to boot chickens into the opposing goal. The game is setup to be 3v3 or 6v6. The field for 6v6 is slightly bigger than the 3v3 field. There were a few glitches that I'm sure will be worked on, but overall, it was addicting and lots of fun. It had some neat loot to barter also.

I didn't get many good pictures while playing, but here is one where the Game Hen (the chicken ball) decided she had enough and flew up and refused to come down. That did seem to happen a lot, especially during 6v6, undoubtedly something to be worked. Regardless, it was still fun hanging out with friends doing something that didn't involve dire situations saving the world. You can see that a few friends and I were in Red (see the R above the heads and the added red cloaks).

Pet Chickens: Here is the chicken pen for chickens that can be bartered. There are six of them.

Ok; the white chicken is reasonably easy to get. I won a couple of white chicken tokens plus enough Hobnanigans tokens to get that one. Friend Lyn also won a Red Chicken token. I didn't see any of the more "advanced" chicken tokens and clearly, this weekend wasn't enough for me to barter a more advanced chicken as the prices were fairly high.

So, I got a White Chicken. I'm no Loremaster so I'm not used to animals following me around. I can't imagine wanting that while questing, but while flying around town or at festivals... sure, why not. :)
Cosmetic Egg-quipment: There were a few cosmetics that could be bartered. I'll always get all of the festival outfits and put them in our vault but given the other goodies to be had and my limited token supply, I passed on all of these.

Here are the barter prices.

Chicken Housing stuff: There was lots of Hobnanigans housing stuff. There was so much I missed taking screenies of page 2. Here are several views of stuff.


I went with the most I could afford and got the Small Hobnanigans Field with White Chicken. It looks neat. :) Here is the field sitting at my house. You can gauge the relative size of it by the size of my guard dog sitting behind it. It fits a "Large Yard" space.

Hobnanigans Emotes: The chicken pet and the miniature housing item were good, but what I really liked were the Emotes. I will probably attempt to barter more emotes next time. There were a total of five emotes to be bartered. 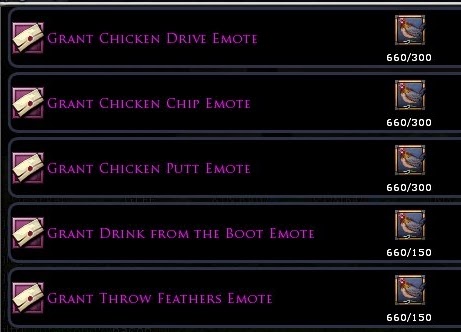 I got the "Chicken Drive" Emote. Here is a shot of me whacking chickens at home in Falathlorn. Good times.

Deeds and Titles: There are titles associated with deed reputation level. Top it out to become a Hobnanigans All-star. 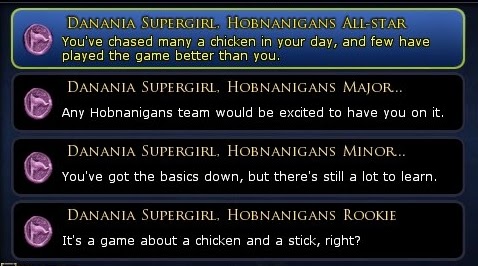 I am definitely looking forward to playing again with friends and making new ones at the next Hobnanigans Games. Keep a look out!