Hello Hello! What a great week!

You know what is fun? Making a plan and achieving it! As I set out across Dunland doing quests, I started building a spreadsheet as to how I would like to look statistically by level 75. Yay for spreadsheets! I’ve modified it along the way as I’ve learned more things that are available, but more or less I’ve stuck to my level 75 build plan.

Oh, my plans are never too crazy. I would love to include a Wyrmscale cloak, but beating Draigoch many times to acquire the necessary scale mats is not a short-term goal. Beating him once would be a great feat! In fact, some of my friends (Elmlorn, Nidrod, Byrane, Lynrial, and Beorhir to name a few) were in a group that beat him Tuesday night.

Here is Byrane hanging out in Galtrev a few days ago, only a wannabe dragon-slayer at that time. 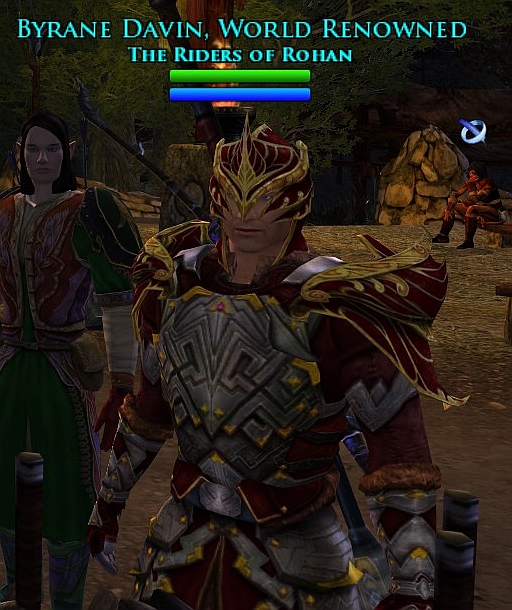 I have seen Draigoch up-close and he is ferocious looking. Some day, I will make a post about it, but I promised readers that I would not post pictures of him for a while until more people got to experience him firsthand. I got some good pictures the one time I went… I also got my face smashed into the ground and came nowhere close to beating him, but I saved the camera… Priorities. For now, here is a picture of Elmlorn leading me toward the dragon’s cave. Please don’t ask why I am letting a rider with the title “Easily Lost” lead me up into snowy paths. 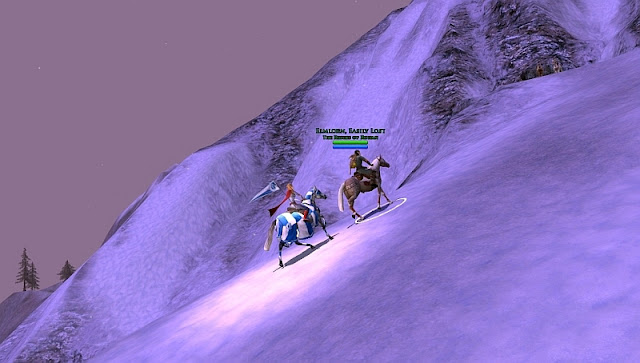 Dana, how about that level 75 build plan?
Yeah, the plan doesn’t have anything too crazy. It targets things that are obtainable and not always #1 in class on the dana-score. They are usually within the top three. As many of you know, there are about 5 pools of gear that you can choose: (1) Moors, (2) Crafted, (3) Purchased from rep vendor, (4) Bartered with skirmish marks, and (5) Quest or dropped, especially in skirmish raids.  Out of my 15 armor/jewellery/pocket gear pieces, 3 are Moors, 9 are Crafted levels 70-75, 2 are Purchased from vendor, and 1 was from Quest/drop. I haven’t been able to make any skirmish raids yet.

Moors gear: The Moors pieces were costly; you don’t want to know how costly. I am a Renown 6, Sargeant-at-arms. Shortly before the Release of RoI, my friends Menelchol, Nimitar, and a few others alerted me to the fact that level 65 Moors armor would trade 1-for-1 for level 75 Moors armor post-release. So, the hunt was on. The Moors armor used a pile of difficult to obtain items, like brilliant spirit stones and tyrant’s crests, of which I hadn’t won any items at all. Bless the Auction House and capitalism. However, I was very late in the demand-supply game and paid dearly for it. It cost my life savings to obtain three Moors pieces, which traded to level 75, but they are MINE!


From the picture taken two weeks before RoI, you can see that some of the barter piece prices were elevated due to high demand before the RoI release. I did not pay 100g for one part of one armor, but I did pay a lot. 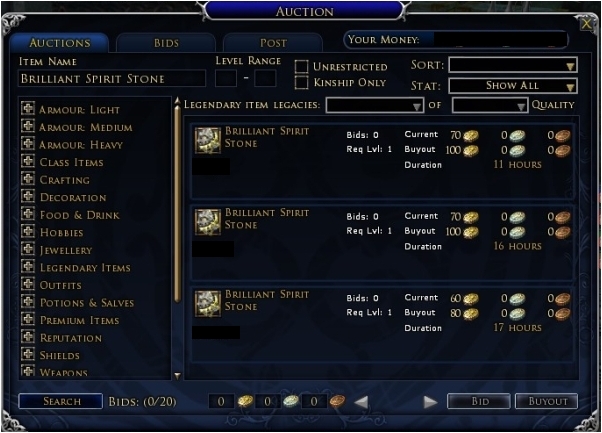 The Moors gear is lovely and statistically some of the best. Granted, I haven’t been to the Moors since RoI release, but I like my Moors armor, and for as much as it cost, I have to wear it every day to get my money's worth out of it. I think that with a good Raid group and the right quests (and the right renown) and a plan, the Moors armor might be slightly easier to obtain now, though not easy. As I understand it, there are quests that grant every participant the necessary crest or lash to be used toward your armor (no longer are you rolling against an entire raid party for one lash). However, you will need 20 crests and 20 lashes per piece, so the road is doable but takes patience. 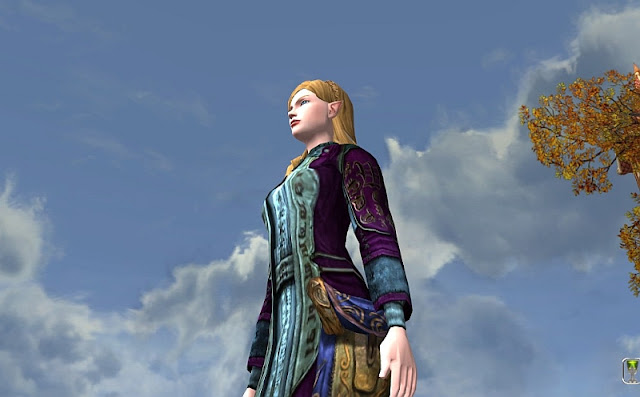 What I noticed while leveling in Dunland was that most of the quest gear was kinda “meh” for rune-keepers. You want morale and Vitality? You might not get much Will or hitting ability. Vice versa for the other option where I could hit really hard and have little morale; that would exaggerate the glass-cannon feel of being a rune-keeper.  My plan put me somewhere in between. I have enough Vitality to be able to function effectively, and enough Will to be able to function effectively.

Level 75: I almost never get to see what others’ builds look like statistically, but it would help to gain perspective on whether the build I have makes sense. For your benefit and mine, here are some key stats on my build. Actually, in column #1 (level 65), I was still in my Moria 4-piece set at level 74, so achieving level 75 and gearing up made a big difference.


In column #2 (level 75, which has my current unbuffed stats), I am reasonably satisfied with over 900 vitality and 900 will, though I would prefer more morale. My ability to protect myself has improved quite a bit since I changed gear. It might not be perfect, but it is a solid build. Time will tell whether or not I feel comfortable like this or need more will (or morale).

Level 75, with 4 raid pieces: In column #3 above, for grins, I did calculations on what I would look like if I swapped out 4 armor pieces for four “Clever” raid armor pieces. The price is 96 superior fourth marks for the 4 pieces; I have 3 superior fourth marks currently. With a swap, I would have lower morale than I did at level 65. My power would be much higher and my Will over 1200 would make hitting and healing smoother. But overall… meh. It’s kind of like getting my LIs completely decked out with Greater Empowerments… I’ll get those raid armors as I get them and will become a more versatile rune-keeper, but not having them won’t stop me from celebrating festival. I just won’t worry about it; it will be on my to-do list.

Max Morale: Ah-ha! In column #4, I picked all of the highest morale stuff I’ve seen in-game and did some more math to come up with that build. It doesn’t consider LI stat scrolls or LI passives which could add more morale; so really, a rune-keeper could push toward 12,000 morale.

That column could also be known as the Cherry effect. When out in the Moors, I’m not sure I’ve seen a rune-keeper with more Morale than my friend Cherrypop. Granted, I’ve only seen her recently with about 9100 morale… but that was the day after she hit 75 before she had time to get all the high morale stuff. The idea of a rune-keeper walking around with 12k morale, even though hitting ability is on the low end, might give some creeps nightmares.

Here is a shot of Cherrypop, while we were still in Moria. I like the hat. She is always well dressed. 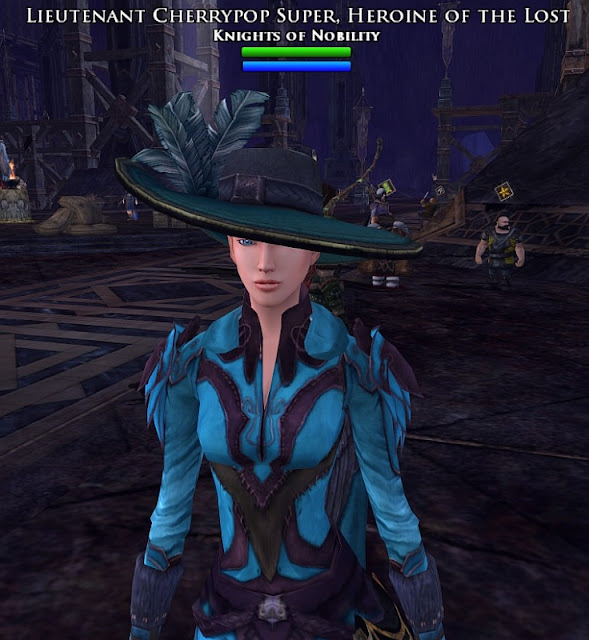