Alrighty then! I am alive and well in my new bloggy home! I’m ever so glad that you have made your way here too.

I have so many things in my head to write about… but the first one that I didn’t want to overlook was Yule festival!  “But Dana”, you say… “This is February; it isn’t Yule fest time”. Too-true, too-true… Yule fest did end only three weeks ago due to the unusually long fest duration and we haven’t had another fest, so it still counts. Besides, I really liked some of the pictures. J 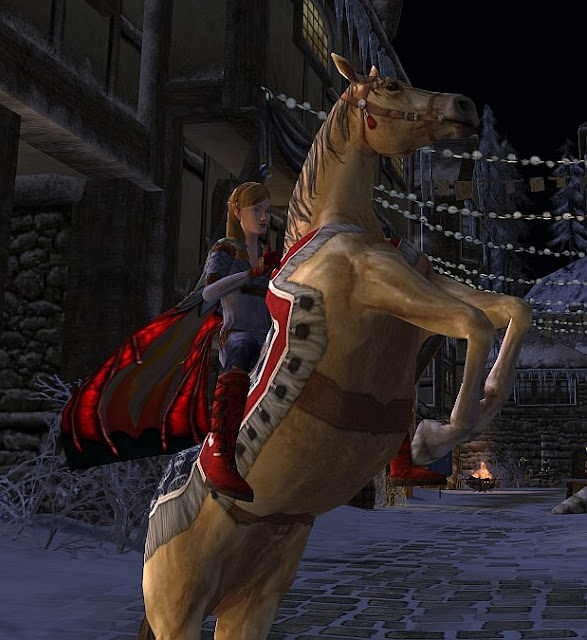 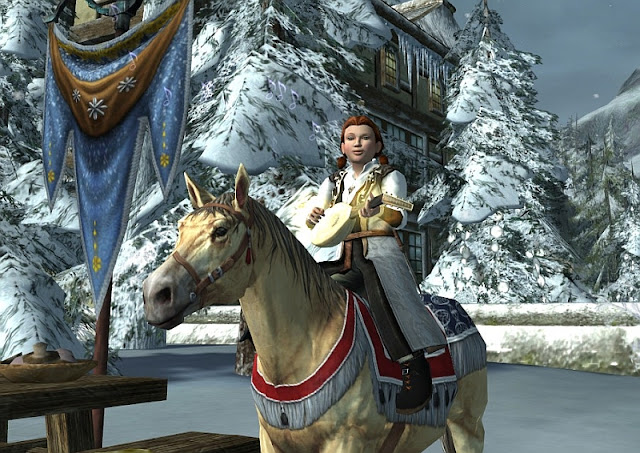 Abominable 2011
“Mr. Bumble… <poke, poke>. Mr. Bumble, time to wake up…I saw some fresh deer wandering by… the red-nosed ones are extra sweet. Time to get up and play at festival!” 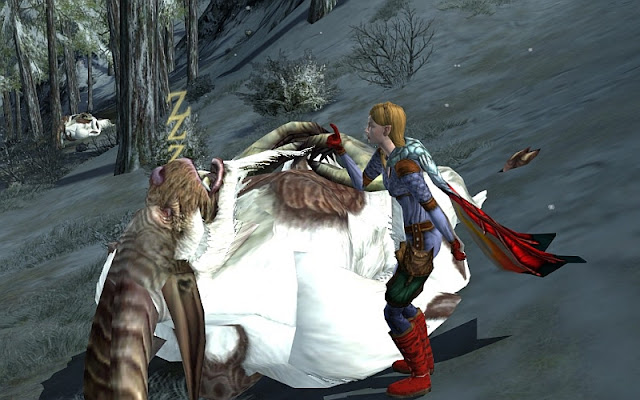 Snowman Army 2011
“Mwah-ha-ha-ha! My snowman army grows larger! Last year we were relegated to the far field. Now we move closer to take over the town. Our numbers grow. Good work to my minion Virgil Greenfield for paying the people to build the army that will enslave them. Beware!” 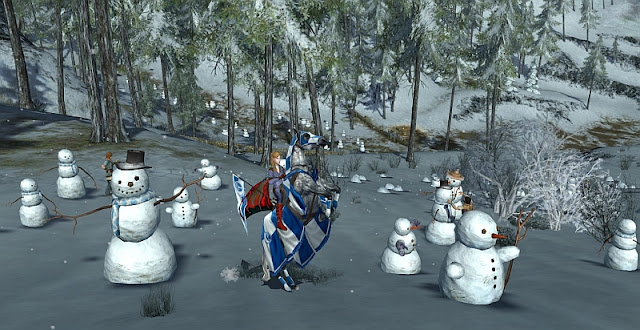 Dancing
Time to go out with friends and do a lil line dancing! Irialeth, Cherrypop, and I bring the dancing to the people, dancing overhead at the entrance to Frostbluff. 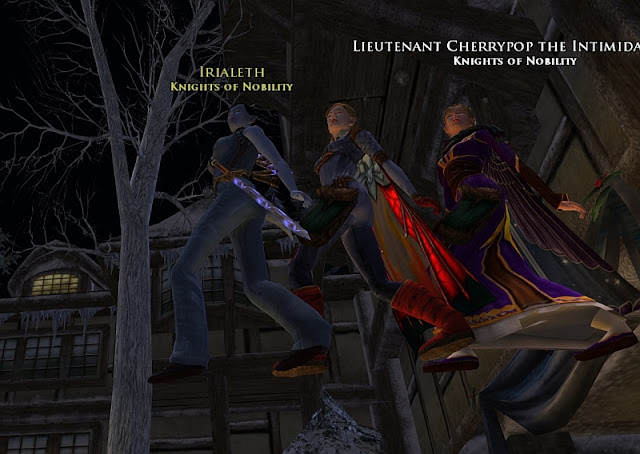 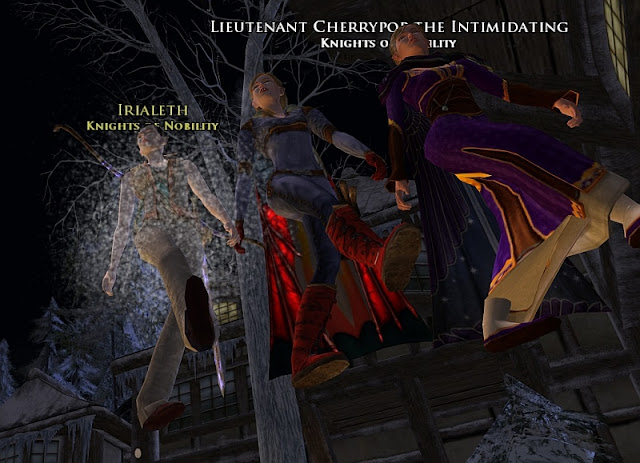 New Horses
Festival steeds! Some of my favorite steeds! Every festival the lil danas and I go out to pick up our festival horses. The strangest thing happened this festival. Hengstacer offered two new steeds this past Yule. That had not happened before. In festival’s past, Hengstacer offers a newly designed tack for the current festival as well as the previous year’s festival. This Yule, there were new two steeds plus the last year’s steed. I’m not sure if someone got overzealous and it came out in err, but there it is. J The grey one with white covering is the first 2011 Yule steed (offered beginning 12/20), and the brown one with blue covering was the second 2011 Yule steed (that showed up at the farm around the first week of January). 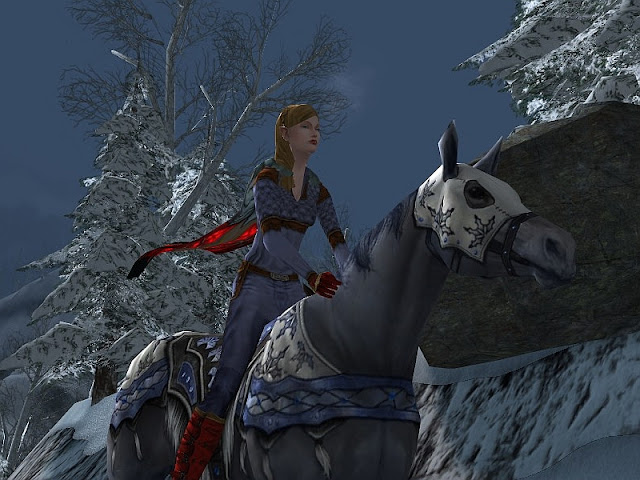 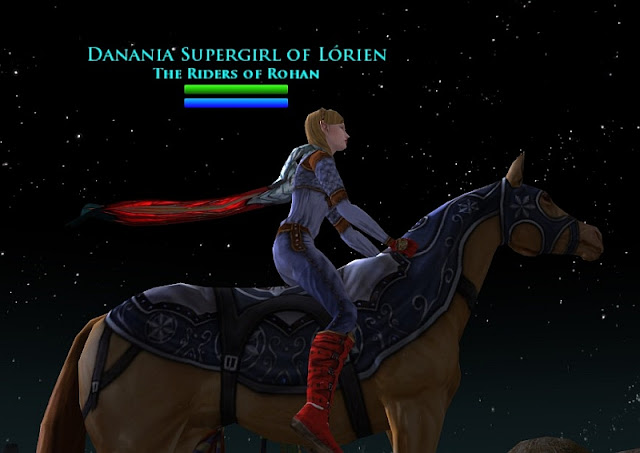 A Goat!
I forgot I even had this goat. Goats are a bit unnatural as a steed, but I like them all the same. As I was recalling fond memories of Yule, I came across this picture of me on a Fleet-Footed Goat riding through Frostbluff, so I must have gotten it as a Christmas present from the lotro store and forgotten. What WAS in that Mystery Drink anyway??? I’m going to have to check the stable when I get home to see if I got any other steeds. 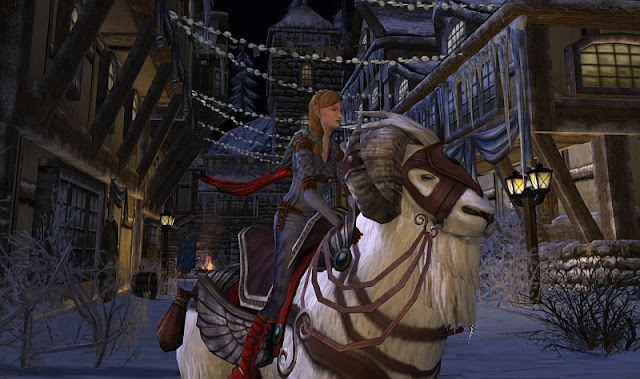 A Property Guard
Some of this is coming back to me now. There was a good sale, and who could pass up a good sale? Somechick the “Elf Female Property Guard” was part of the Christmas shopping. She is free to roam, but mostly she just stands there in the yard making sure no dwarves or goats try to swipe mail from the mailbox. You go Somechick! When the lil danas finally move out of my house, it is good to know Somechick will still be there making sure the property is guarded. 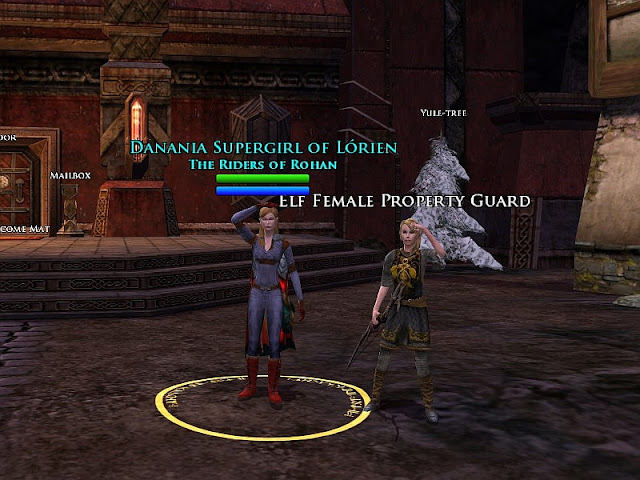 Consumables
Oh consumables. The snowballs were fun. You earn them, you throw them, you earn the experience of having the skill to always gather a snowball to throw. Very useful. …but, oh the shocker of three of the other festival skills. Those three were tied to the same Cooldown timer, and that timer was 5 minutes. Since you need 300 for deed completion, that would be 1500 minutes worth of consumabling for EACH of those three. To get all three, it is 4500 minutes. Really? Working alone, that is 75 Hours minimum to complete the consumable deeds? Really? Which silly person came up with that as a reasonable deed?
I express my shock and dismay. 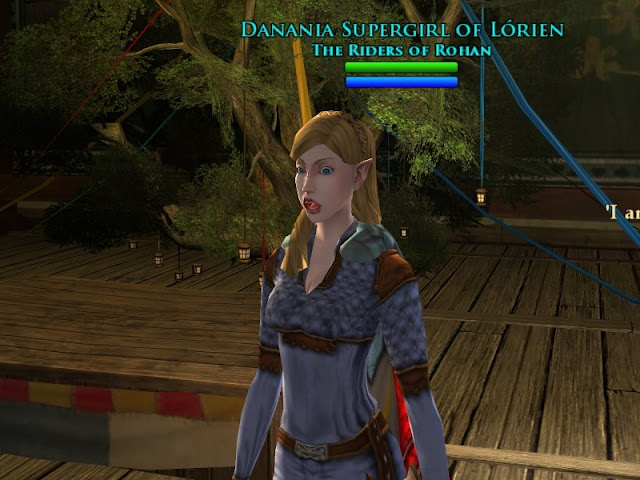 I gave it a shot, working on it several times with others such as Nimitar, Chupachup, Daweirdo, Weimar, Ariahnnas, and Thenarch, but alas, I did not finish those three. I made it about halfway with another 50 each of the three consumables that I stored in the vault for later use. If two other people did the same, and we worked on it another 13 hours, I would finish. But, really? Those will remain the only three festival deeds I have ever skipped. 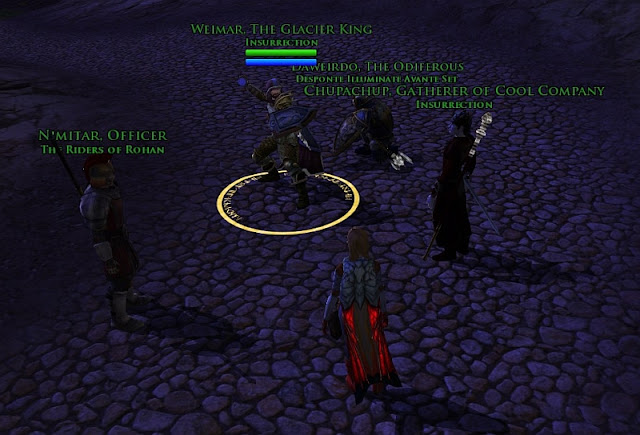 Danadalyn advises that sometimes one can consume a lil bit too much. Wise words lil dana. 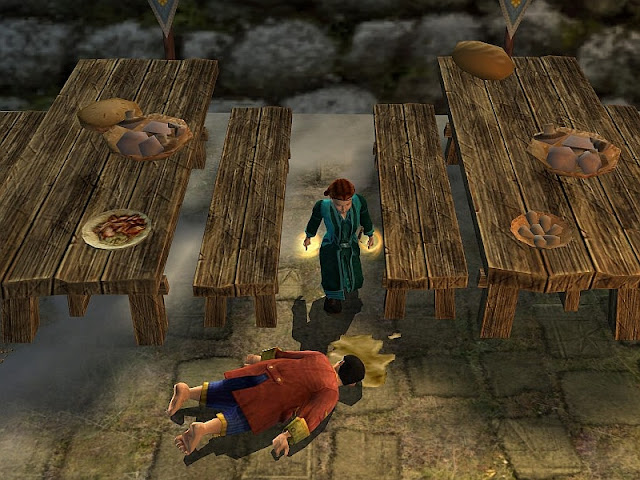 The theatre. The theatre is a lot of fun! I look forward to another story from the hobbits next year. Last year, the lil danas and I must have watched or performed that show a hundred times. It does sum up their attitude though. The show is about how Gandalf, the villain, led poor Bilbo off on an adventure. Gandalf is the bad guy, the dwarves are bad guys, yada yada.

Claus was busy with whatever-it-is-he-does and missed last year’s festival. This year’s extra duration Yule let him join in the frivolity. Here is a shot of “the star” meditating backstage. 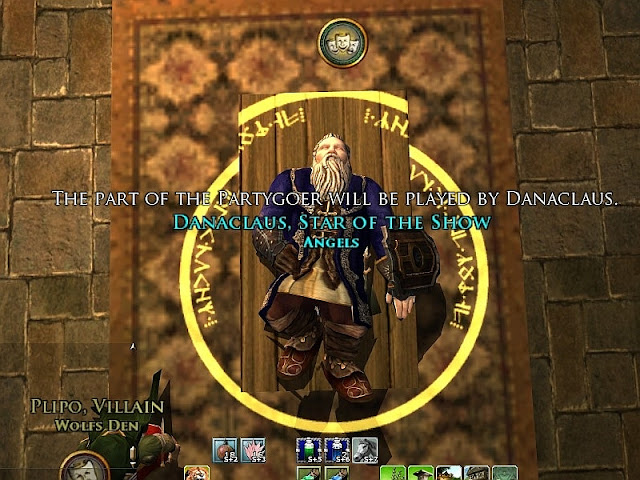 As much fun as it is to actually perform, sometimes, it is better just to hang out with friends and watch others perform. Here Isilibel, Belile, and I wait in the audience and watch Candykane star as the hero of the show and silence the critics with her moving emotes. 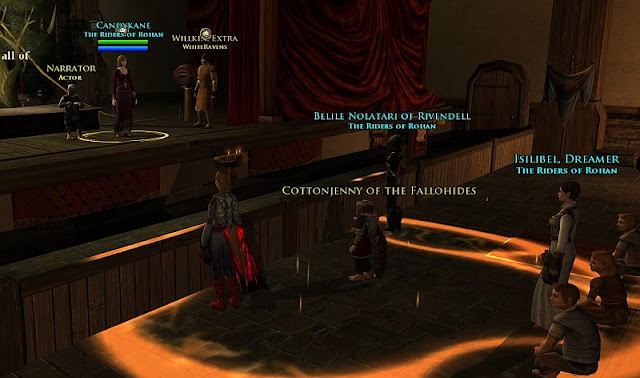 One thing I have always liked about festival, is that often I see friends I don’t normally see. Festival has a way of bringing people together. Sometimes, I meet new friends there also. Here are a few from Yule.

Tanais. I nearly always see Tanais at festival. She is my friend, and one of the leaders of the Swords and Spirits. I first met Tanais in the theatre last year. 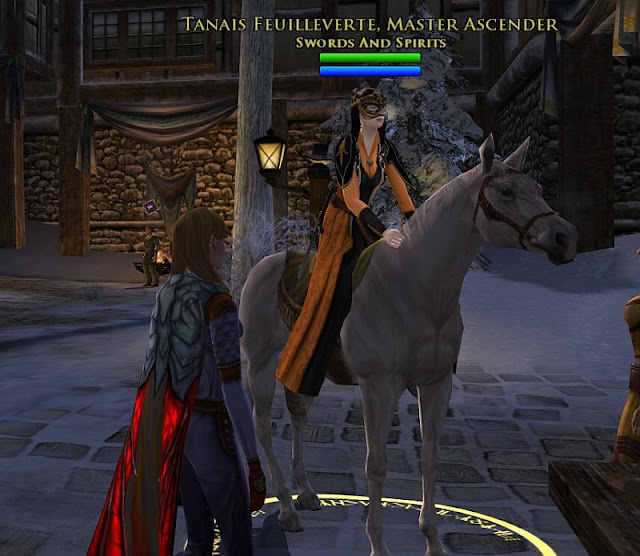 Saeiranos. I met Sae at this Yule festival. She joined the Riders of Rohan during festival and I am glad she is around. 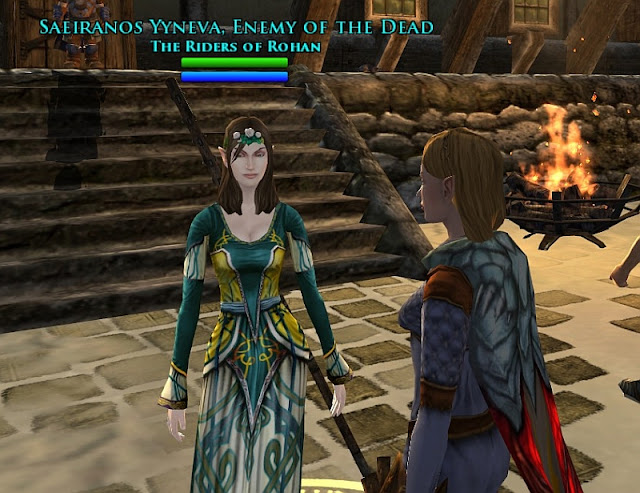 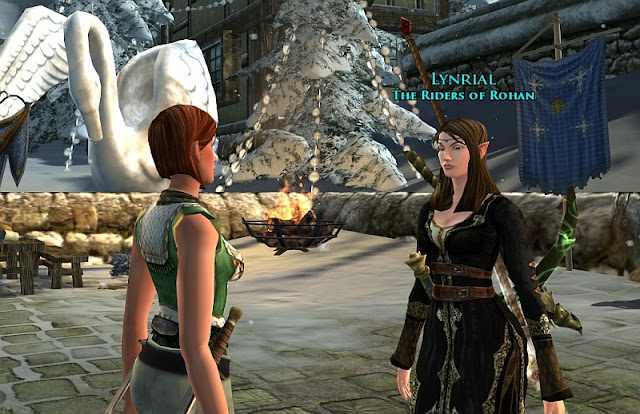 Sparowen. I met Sparowen at the 4th Anniversary party when we were playing in the beer brawl. 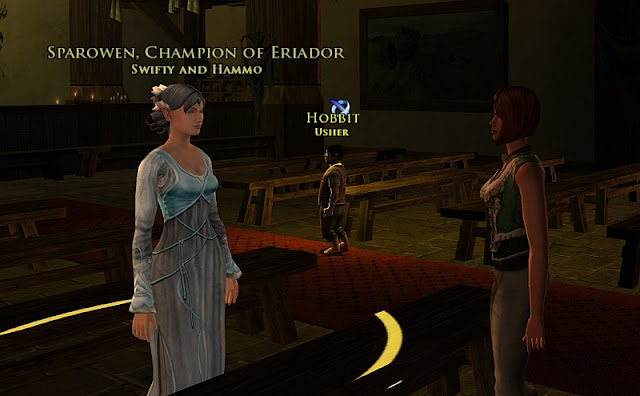 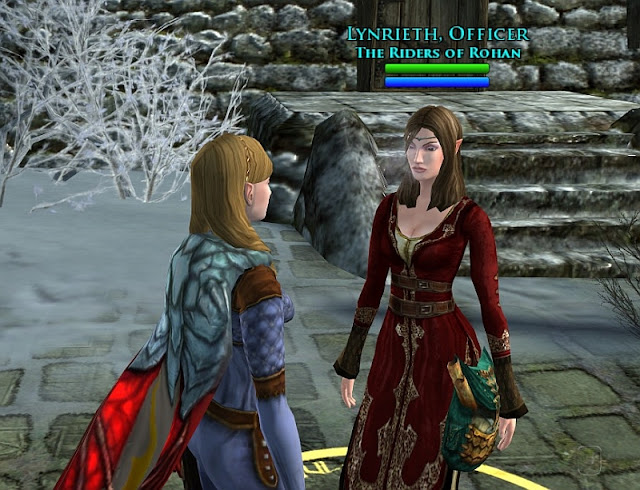 Nimitar. Here is Nimitar chatting with Danaszar. There are not many that are more determined to make the most of festival than I am. Nimitar of one of those people... without even having to ask, I’m pretty sure he completed his 300 festival consumable deeding. 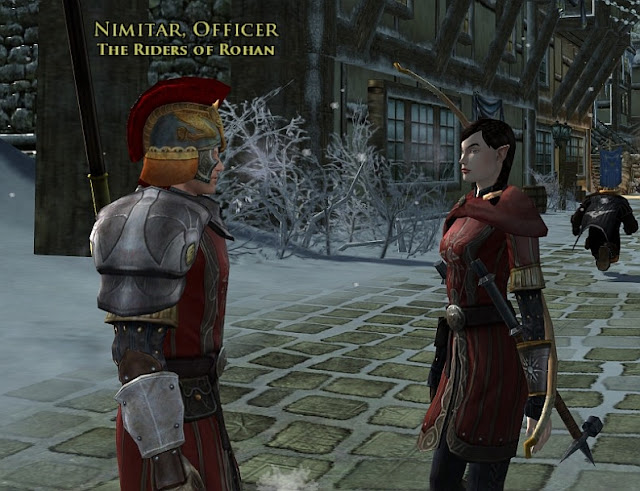 Cherrypop. Where did I meet Cherrypop? She has always been here hasn’t she? I believe I met and hung out with her at one of the earliest festival I ever attended. She has been my friend as long as I can remember. She is notable as one of the highest ranking RKs in the moors, and her name makes a warg’s fur stand on end and defilers turn grey with dread. I gave Cherry the red skirt in the picture for Christmas. It was lovely but I am not fashion-wise enough to know how to match it. Within a day, Cherry had assembled the ensemble below. Mad skills. 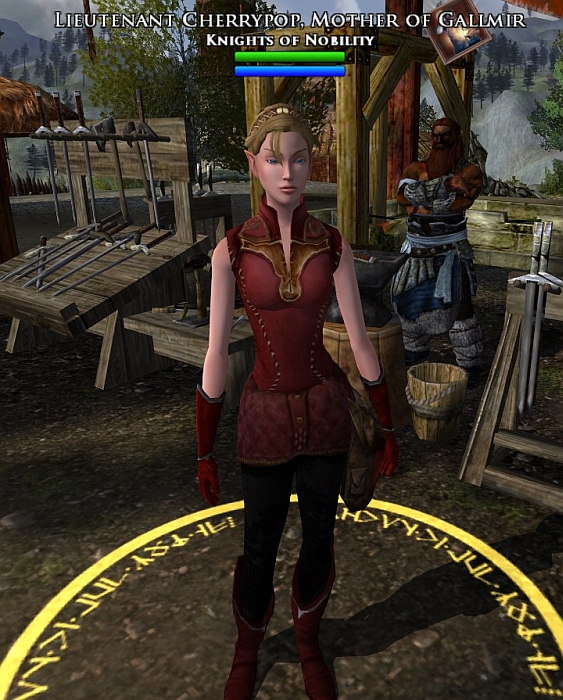 Well, you can’t have festival without a lil drama.

Our heroine, Danadalyn, upon entering Frostbluff could immediately sense something amiss. Why does the guard want ME to bother these poor people who are sitting around town? Why not just put them to work? If they really have nowhere to go here in town, why not head to Bree? There seem to be lots of people doing nothing there. Learn a trade, mebbe? Then you too could stand around Galtrev crafting basement. At least it is warm. 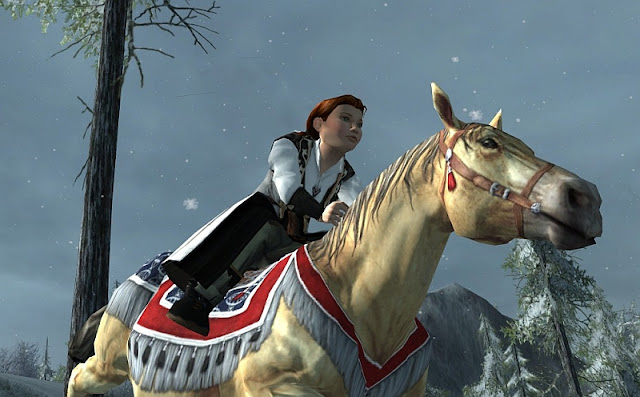 Ah, Danadalyn confronts Banker Archbluff. He blames me for the plight of the poor? Why is it everyone else’s fault Archie? You know what… someone has been messing with your mind… You haven’t been talking to someone named Sarah Oakheart have you? No? 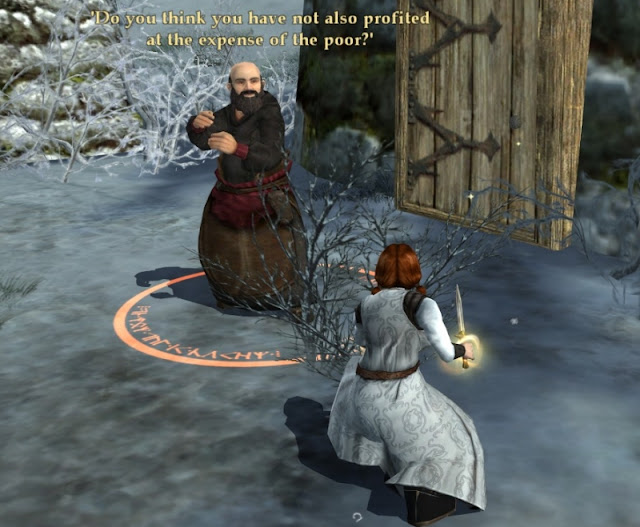 Donning her riding cap, Danadalyn rides toward the Shire.

Hmm… she is using an old Shire law, “Whosever resides in the Hill at Bag End shall be charged with the planning of festival activities and shall preside over said activities…”.

Lobelia is pilfering money out of Frostbluff with the help of Mayor Goodnough to line his pockets and bankroll some project.

How to stop her? 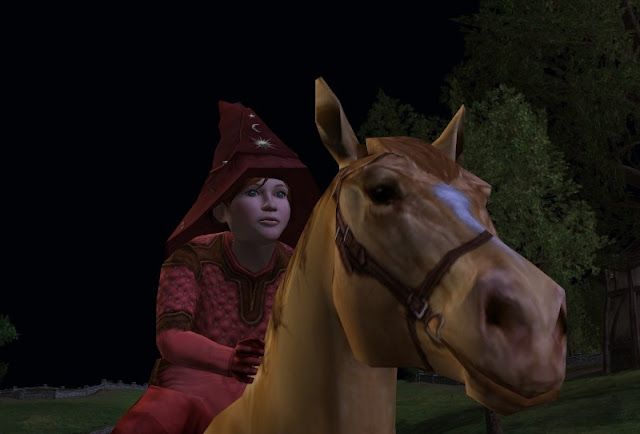 The Great Smials holds the library of Shire records and the Book of Festival Law. If enough signatures can be signed on this petition, we can vote her out of festival planning. That is a start. But, how to get Lobelia to admit she was wrong and return the money to those citizens of Frostbluff? 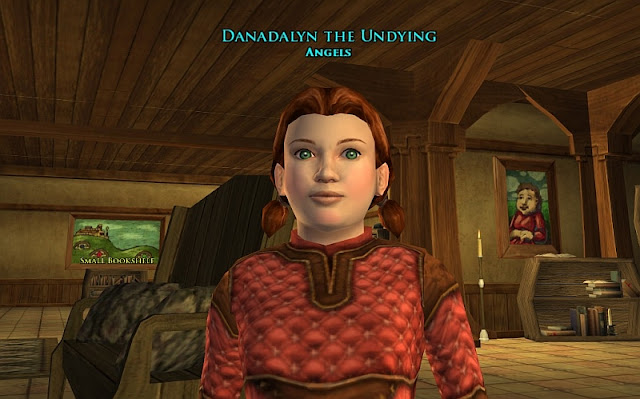 I need a bit of help. Time to call on the big man.

With a bit of Yule magic, Danaclaus pulls out a bag of “Dear Danaclaus” letters written by good lil hobbits during the yule season. With a hearty chuckle, he pulls one out of the stack and acknowledges that this opened letter was delivered to him by mistake and that he was returning it to its rightful owner. The letter was written by Lobelia and addressed to Mayor Goodno. Perhaps you can get it to its destination, Danadalyn? 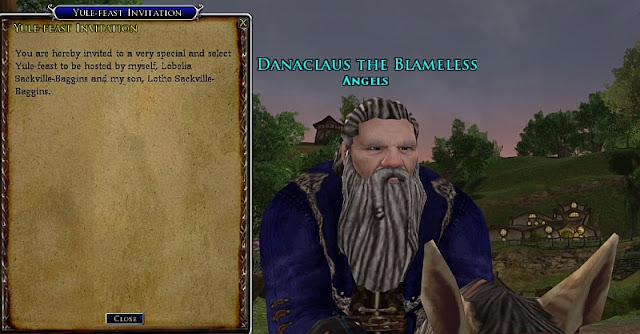 Ha! Caught in the act by your own words. You intended to split the festival profits between yourself and Mayor Goodno! Time to do the right thing Lobelia. Do it for the lil ones like Marigold. (whispers… “show the sad panda face Marigold”). Thus, festival is saved and the people said “Hurrah!”. 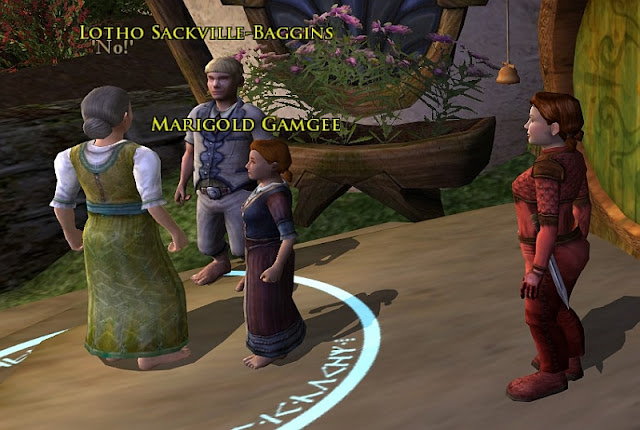 End
Fear not, Angels are all around you. Sometimes you just need to look up. 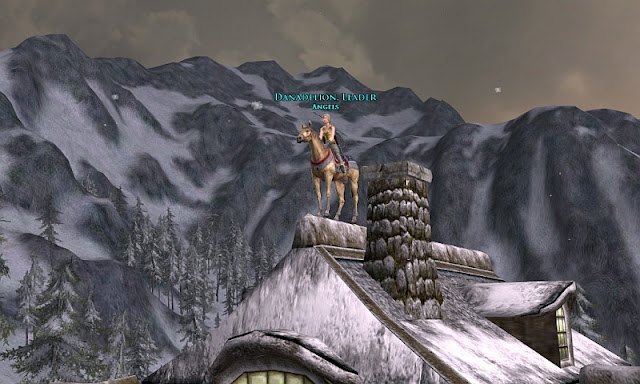 Where to begin...it's almost overwhelming. The Dana's and their big adventures are always entertaining..and the mounts..the mounts! I must say I am sad I missed the fest this year they just simply seem to get better and better every year. Not to mention the addition of the bonus steed.

Welcome to your new home Dana! What a terrific way to start!

Yay! I love the bloggy goodness! <3 Welcome to your new home Dana!

I fully expect the snowman army to infiltrate the town by next yule. I've authorized the lil danas to set up a training ground at their new house (assuming they ever get around to moving out of mine) where they can build stronger "cooler" snowmen. Mebbe some with four arms, ninja scarves, battleaxe wielding ones... you know, the lil charms.

Thanks MW! Undoubtedly, there will come a day where the War-Mini (MW-WM) shall be in the blog, for more than just spousal abuse. lol

Good to see you are still at it. I love the commentary with all the pictures. I definitely envy your creative writing skills. Keep it up. :)

Thanks Asma! As long as it seems that people are still interested, I'll keep going. :)