This page is unlocked for commenting about Runekeeper things!
I intend to expand this page and elaborate and consolidate RK details as I go.
Feel free to leave a comment if you have something you would like to say about your build, fun stuff about RKs, etc.

As I did for level 75 (Danania @ 75), I will list my character sheet, LIs, and gear on this page for interest. (Clearly, I haven't gotten around to it yet, hehe.) I will periodically update this page.

As indicated in the relic article (update-10-t9-and-eastemnet-relics), it is possible to get much higher Mastery, but I choose a different balance, a solid build for both defense and offense.

The explanation of Mastery math is here (lotro-math-mastery-diminishing-returns).

Because it was interesting... here was a hit I laid on a Dourhand up on Iorbar's Peak. Typical good Epic Conclusions run 12-17 k damage. This time I was buffed by Captain Nimitar and travelling with a champion. At the time, I had 2nd age LIs, built similar to the 1st age LIs shown on this page. On March 29, 2013...

Here are my four LIs.
Why did you do that, Dana?
Here is detail on why I built the DPS stone the way it is (rohan-85-rk-building-li-weapon).
And, Relic discussion  (update-10-t9-and-eastemnet-relics).
And, discussion of LI Legacies at (legacies-for-rk-stones) and (legacies-for-rk-bags) 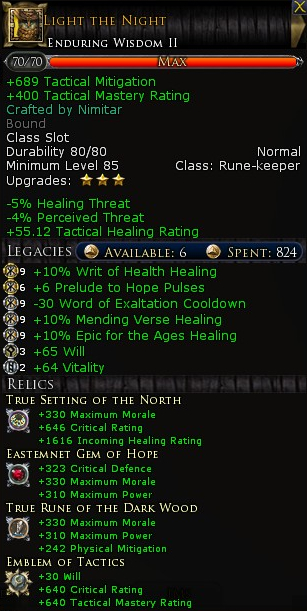 For my use... Go visit the original awesomeness at
http://starandshadow.wordpress.com/2013/05/16/wildermore-warbands-locations/ 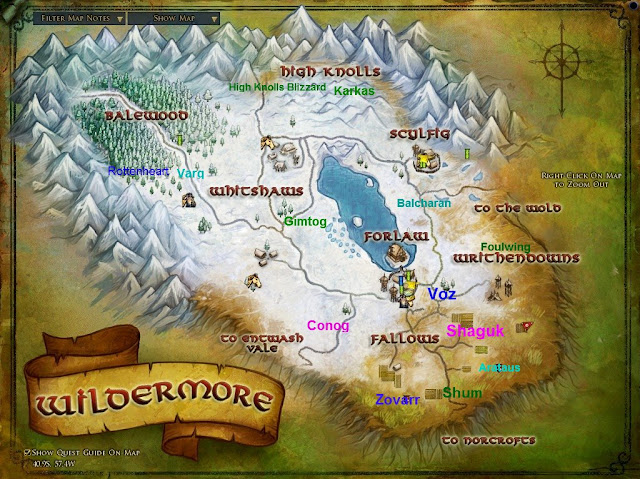 As a new rune-keeper, I found my skill bars overflowing with icons to organize. Since I have difficulty moving about and clicking icons, I tend to prefer using keys. But with all these skills, how could I weave a really good attack and not just rinse and repeat all the time? Finally, I noticed the buttons on my mouse that mostly I program with skill slots like Ctrl-1 or such. So I made 3 mouse buttons - Ctrl, Alt, and Shift. Then I setup my skills in useful sets like Storm, Fire, Winter, and Heal. When I want to use a skill I normally press keys 1-7 without moving my hands. Now I can use any elemental skill by simply holding down the mouse button for that bar and clicking a number key. It is so easy to weave Winter, Fire and Storm now, that my whole attack rotation has changed. I have fun mixing up the different elements to aid one another and cover ranges. This makes playing easier for me and maybe you already do this (I always am last to know), but that's my idea. I hope it helps you.

I am glad to have found another who has realized that the Rune-Keeper truly is the best class in the game ;) As a freshly reached level 85, however, I was curious as to what you would recommend for me to seek after first. My stats are not good, to be frank, with under 7k morale, and ~4k tactical mastery, but my skill with the class allows me to mostly get by this when soloing. I would like to be sure that I am reaching my full potential though. Any help you have to provide would be greatly appreciated! :)

PS: Out of curiosity, how do you keep your skills organized? Thanks again!

Hello Amarilla!
Where to begin... Since you are level 85, you could solidly and easily get the Hytbold set of armor. I actually set that set now, I use Lightning but they all have their benefits.

Jewelry, there is a lot of it. Most of the teal pieces from the instances that are designed for Tactical classes are just fine with minor variations tweaking stats. The crafted jewelry can also be very good filler.

LIs... The LIs above are 1st age, but the 2nd age LI components are barterable from the skirmish guy for seemingly little amount of marks. Properly built LIs will go a long way to a solid build. You might review the relic and LI building links above to assist your effort so you don't have to back-track.

Don't tell anyone because some people can't fathom such a thing... but I am a mouser-clicker. I only use skills via keyboard in certain occasions; otherwise I move with keyboard keys on left hand and use skills with mouse-clicks on right hand.

I should show my skill layout sometime... It is Lighting on row 1, Fire on Row 2, Frost on Row 3, and Healing in a circle on the right side (rows 1, 2, 3). Various neutral attuned skills are on the fringe of the rows; row 4 extends along the bottom on the left and row 5 similarly on the right.

Thank you very much! It looks like I was on the right track, more or less. I think I'm going instead opt for the PvMP route in the moors to trade in for some nice 1st age weapons.

Don't worry about being a mouse clicker, for I am the same! :) At least you know that you won't be hitting the wrong skill.

I am sure there are those who would appreciate such an image.

Haven't seen a post for awhile. Are you doing anything in particualr to get ready for HD, or does it depend on what the trait-trees end up looking like? Anything you trying to get finished with alts before the release?

Good questions. I am stocking up on guild crafting symbols so I can move ahead there quickly. Also storing up lots of shards and other such things like marks/medallions. Getting all my family of characters in reasonable shape. Mainly, waiting on the new trait trees to see which direction I need to head. Also, I still enjoy riding around and doing mayhem on my warsteed for no purpose at all.

Heyhey. Anonymous and Wrynne...
After the fall festival, I will send all the lildanas back to the craft areas to batton down the hatches and wait for Helm's Deep release. As you say, guild crafting symbols will probably be a high priority. I have plenty of marks and shards. I will need to grab a few LIs to level and break as I start going through new quests and getting iXP. Overall, I hope to just enjoy the ride. :D I haven't looked into what skill trees and such will come with HD. As it launches, I will dissect and analyze it and start optimizing what I see. I would hope to write all about RK stuff as I learn it.

I've just started a baby RK, and I'm wondering--what are the fundamentals of this class? Since I level slowly I don't need advice on LI's and armor as much as some thoughts on how to approach the class, what my go-to basic skills will be, and maybe some ideas on solo play.

Zaianya, great question. Two fundamentals of being an RK that I instinctively have are (1) hit and back peddle in a circle, and (2) plan ahead.

RKs in dps mode and killing machines but cannot take a hit very well. So, learn to hit with lightning while moving backward; your lightning skills are fast skills with no induction that you can use while moving. I rarely plant my feet while fighting, even when it is only against NPC monsters. If you get in trouble, know where your stun skills are.

Secondly, think about the fight you are entering and what your plan and backup plan are. I know this sounds silly, but you will see that some of the skills require planning ahead (they used to be more plentiful before changes over the past year). Some are named "do not fall", etc, but others like a healing Runestone might be critical to keeping you alive and is a pre-plan before the attack.

My best suggestion is take it slow, practice, and experiment. You will find what works well. Fun ways to start a fight while soloing are to use the new Fulgurite Stone to get their attention, or a Fire DoT induction then open the lightning attack. When soloing and most of your life, lightning attack will be your greatest ally.