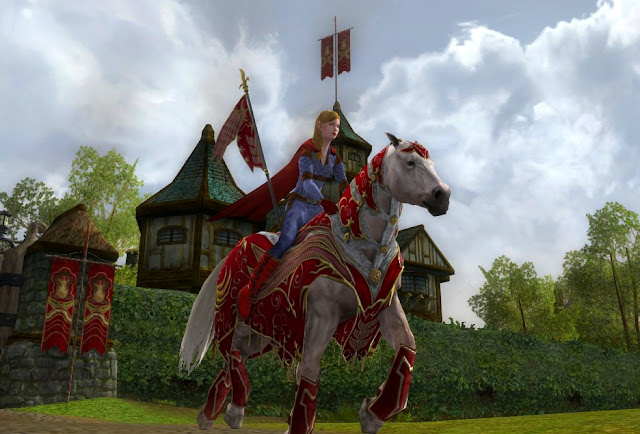 Party Time! The 6th Anniversary Party is fun! I must say that there is a certain relief that the festival is nearly identical to last year’s festival. Any deeds or quests or goodies that you didn’t get to do last year are still available. There is one exception: there is a new Reveller’s Wasteed appearance to be found in the envelopes quest in Bree. Most importantly, there is nothing broken, which is a big achievement versus some of the festivals last year.

This post was going to be a tallying exercise, showing how many Mithril coin resets it took to get the Warsteed appearance (yes, this quest resets at the cost of 5 mithril coins). I even had some clever titles in mind, such as “how many licks does it take…” or “can I buy a random drop?” However, unlike my typical unlucky rolls, I got the Warsteed Cosmetic Set for Reveller’s Gilded Appearance to drop after only 3 resets total across the first two days.

Reveller’s Gilded Horse: Here is the Reveller’s Gilded Horse. He is obtained from the lotro store only. This horse does NOT drop from anything in-game. I included it in this set as a reminder of what it looks like and for those who are thinking about buying it as it is on sale in the store right now for the next few days! As with any steed in the game, do remember to come visit them in the All the Steeds Gallery. 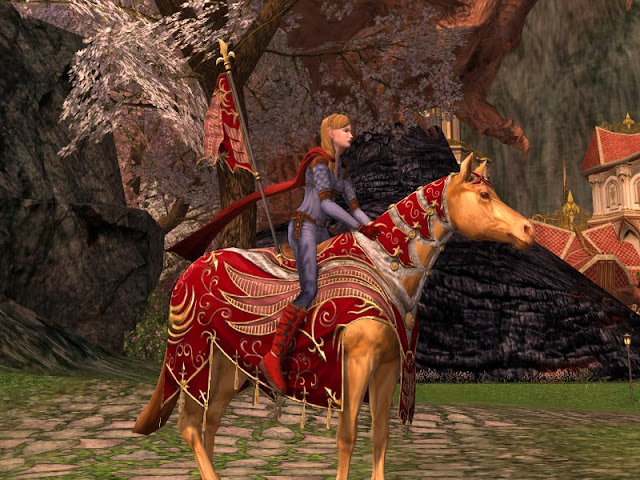 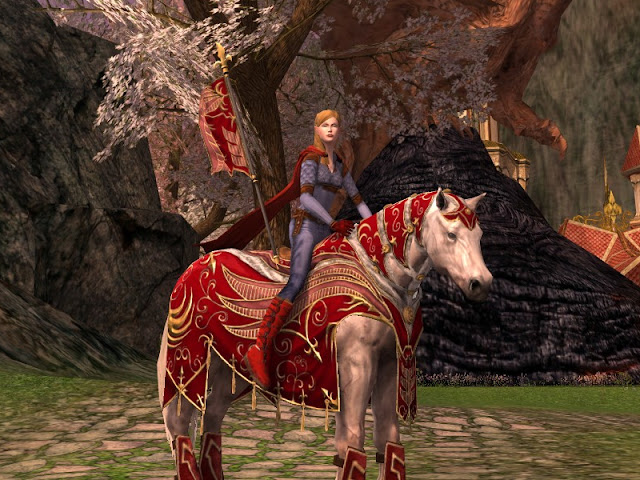 Reveller’s Gilded Warsteed, Chestnut Hair: The Reveller’s colors are very light with gold trim (hence the name “Gilded”) and I probably liked the White hair the best. However, this Chestnut color with dark Chestnut mane looked really nice as well. I pulled his hat off to show off the shiny mane. 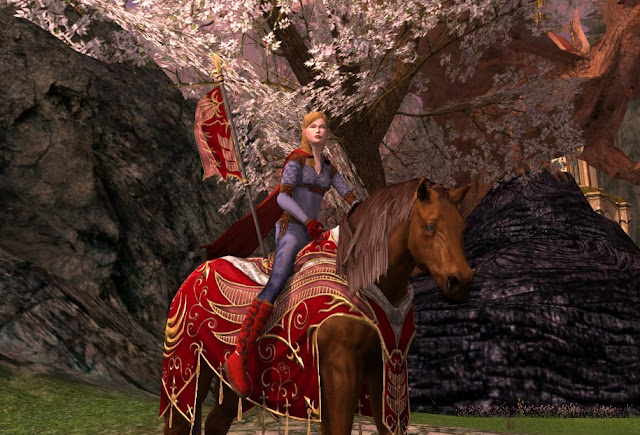 Reveller’s Gilded Warsteed, White hair, no leggings or Halter: The set comes with no leggings; I pulled the hat off while we rode home to get ready for the Party. 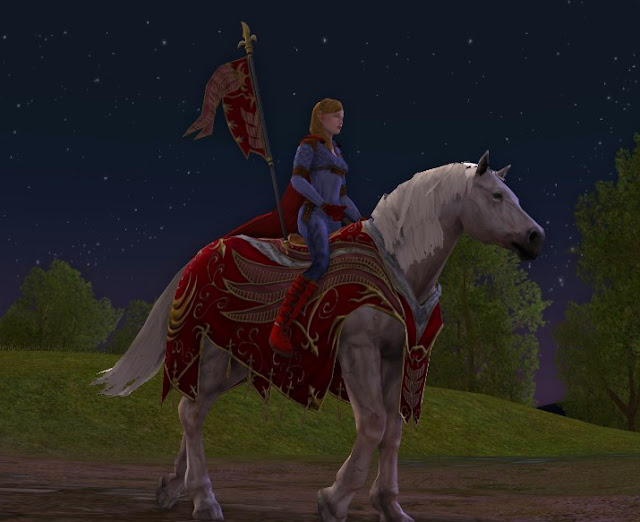 Reveller’s Gilded Warsteed, Party Dress: Getting this beautiful Warsteed was a special occasion, so time to change out of Supergirl attire and dress up. I watch the sun set on Falathlorn after changing into my Reveller’s Party Dress (lotro store). 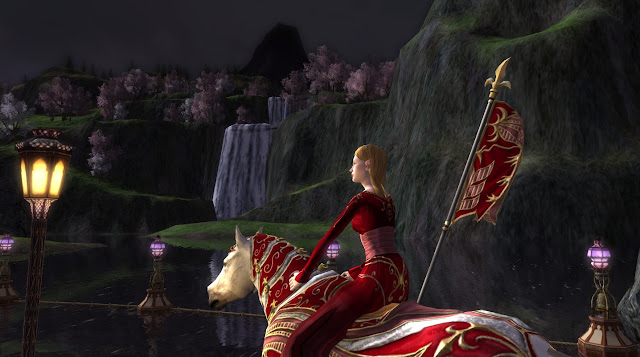 A Circlet of Fresh-Picked Flowers (Farmer’s Faire barter) completes the ensemble for me to go enjoy a night of Party time at the Anniversary festival. 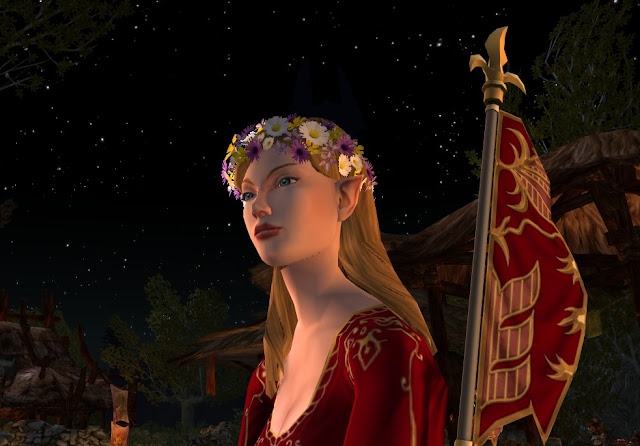 Cheers to you and may your Steeds carry you safely home!

Lots of people seem to be getting this quickly. I've had two tries so far.. hope I get it too. :)

this dropped for me on this mornings attempt :) too bad I'm about 30 levels away from a war steed XD oh well it goes into the vault under 'things to use when I grow up'. Also if you act fast you can get the on sale mounts from last week (the class mounts) for an extra 25% off by using this week's sale code (cart13). Premium mounts with war steed cosmetics for 45% off? yes please!

For stats so far, I was 1 WS cosmetic with 5 tries, and the lildanas have gotten 1 WS cosmetic for their 27 tries combined. Danadalyn looks forward to her pretty warsteed in 25 more levels of crafting. :)

Yay Alysia! If you open the box, the 4 pieces of cosmetic should then appear in your bag. If you right-click-use each of those, they should go into your "warsteed cosmetic list" even though you cannot see it yet.

Did you choose to get any of the premium mounts with the double discount? :D

Danania I got the minstrel steed (kinda had to haha) and the loremaster steed as well as the revelers steed + cosmetic outfits. All in all around 3500TP *dies* oh well, no store steeds for a while.

I finally got it for my mini after three days of opening envelopes, is really one of the fanciest steed cosmetics, I don't mind that it can't be dyed as bright red looks good XD alsso nice match with the reveller dress ;)

Very nice Alysia! Three store steeds plus outfits for 3500 is a much much better deal than when it came out. Go you bargain hunter! :)

Totally agree Gloredh! I know, I know... I saw that after I get almost every steed... that it is my favorite! lol! But, this one really is beautiful. :D

darn that bound to character, my burg got 5 & the champ has 3 of them so far but none on my main >.<

Aww Mz... what twisted luck. :)
Definitely too bad that they aren't Account Bound.

I had a similar thing happen which was too incredible to edit into the post... Danaish hit a "luck-bubble" and got the Warsteed box on 3 consecutive envelope openings! Dumb luck. :)

hey danania heres an update :( all my non-horse collecting alts has at least 1 set of the cosmetic (most have multiple) just from free daily. my main and my RK spent 180 coin today + free daily everyday. main finally got it today after about ~70 coins. RK got absolutely nothing but unwanted messages and tokens, no toast emote either. >.< gave up X_X

Random Luck Generator is one of my biggest pet peeves about the game. Similarly, I have been searching for the Red Painted Skeleton Horse in the lootboxes... ~ 86 boxes and no horse yet. Sorry, I feel your frustration.

Here's to hoping that you have a good run of luck in the near future to balance it out.