To be a Thane 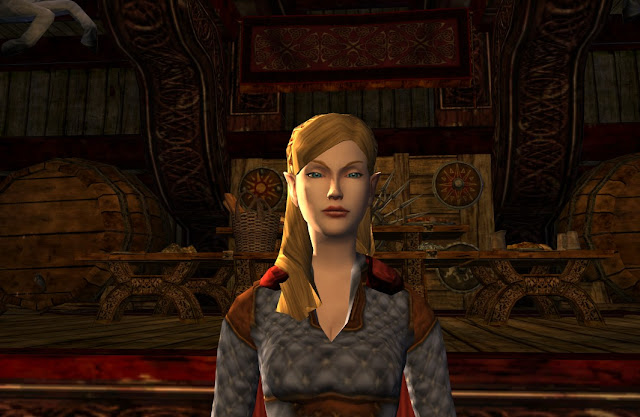 I held off writing about Hytbold for a while because I didn’t want to give away too much. The end of the Hytbold quest line is one of my favorites in lotro. Over this article I will touch on some of it but promise not to give too much away. :)

Gather round kiddos and I will show you some pictures of how I became a Thane. My thane-ness happened a few months ago on December 23rd. I didn’t get there without help however. What every Thane-wannabe needs to know is the link to a very useful guide by Fredelas. The Hytbold rebuild is a complicated puzzle web of quests for whom to talk to to get certain portions built. So, go ahead and bookmark the guide at
http://forums.lotro.com/showthread.php?482751-Hytbold-A-Guide-to-Rebuilding-and-Armour

On reaching level 84, Fastred, Reeve of the Sutcroft, will send a letter asking for help.

Having been burned to the ground, Hytbold needs a lot of help. I focused on things that gave me “working pieces”. I wanted to get the town functional before making it look pretty. Some of my first pieces were Meadhall Outdoor 1 and 2 for milestone and mailbox, The Smithy for forge and ore instance, The Lumbermill for workbench and wood instance, The Armoury for forge-master and relic-master, The Library for scholar instance, and The Stable for the stable-master.

As I looked at the Hytbold plot plan, I probably would have designed it differently. I tend to think very orderly and probably would have laid it out with straighter and wider lanes for riding horses through town and used street signs so it was easier to navigate. I also had hoped to get better ceiling vents put in the Forge area so the building didn’t fill with smoke. 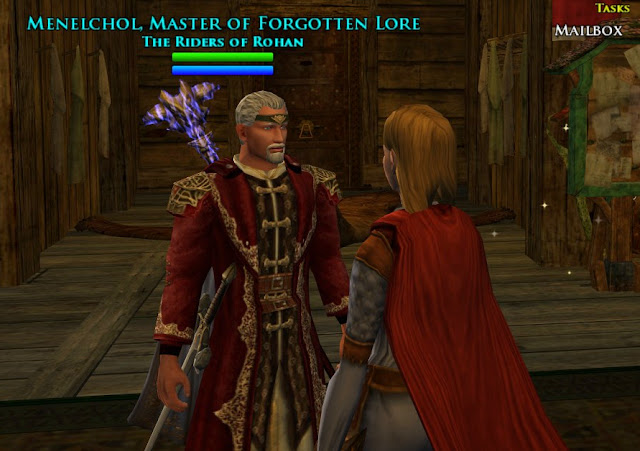 On discussing my city build plan with my friend Menelchol, he strategically pointed out that making it more difficult to navigate gives us the advantage when defending it. Of course, he is right. He empathized with my smoky Forge, but that is why it is important to get precise details upfront with your build contractor. Lesson Learned.

Here is a lovely picture of the Armory. I assigned a couple of guards to stand around and look busy. 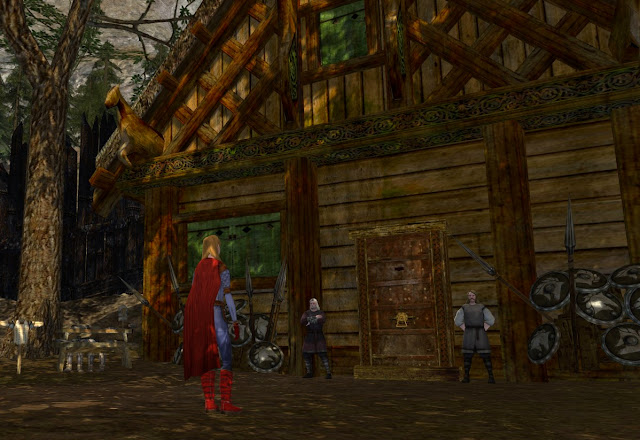 To build all these pieces, you need plenty of Tokens of Hytbold. It is a bit of a marketing campaign, trying to get people to come to Hytbold by going to the other towns of Rohan and earning reputation and working in the currency of Tokens of Hytbold. I enjoyed going out and doing all the quests! Here are a couple of pictures that didn’t already show up in Scenes of Rohan.

Over in Harwick, the people like to play games. I played dress-up with the model. 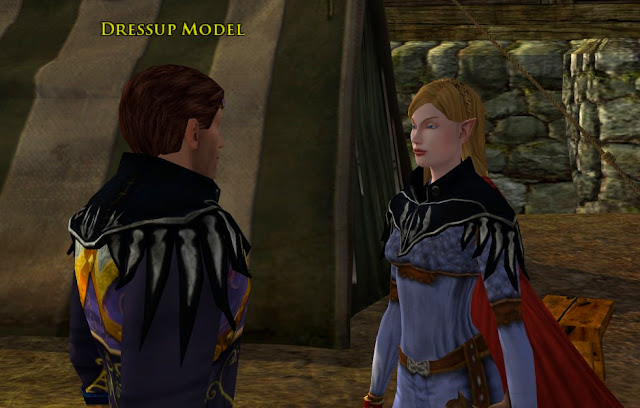 And, I rode a hobby-horse to gain credibility with the kids. I didn’t get to keep the hobby-horse unfortunately. Danaish won one during Yule festival (yule-festivals-end-2012) and I’m rather jealous. 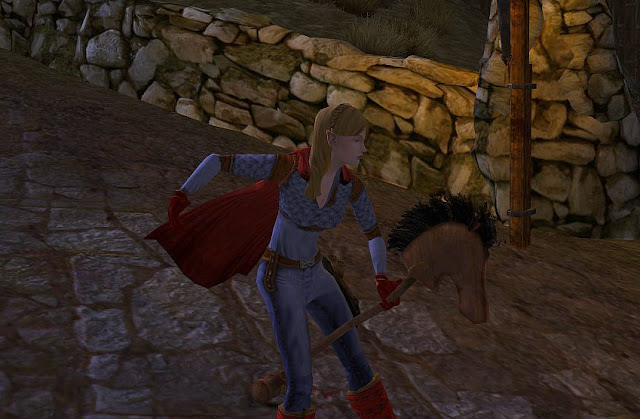 I also went to various places, which was always interesting. Here is one called Dwergfant. I went out on detail to keep the Limlight River safe. 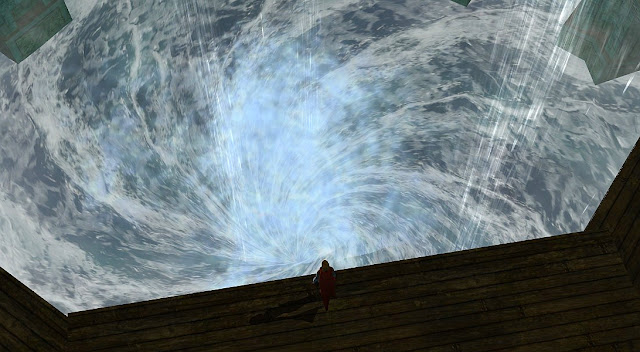 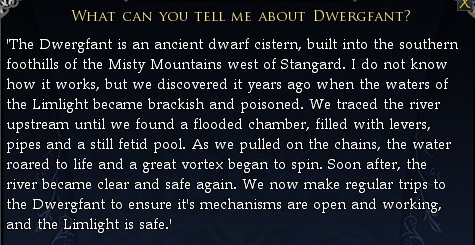 I went to the Entwalk to help small woodland creatures. (Lilikate would be impressed.) The creatures are nice and cuddly but beware that Ents do not distinguish between orcs and other humanoids. They will smash first and ask no questions. Here I am hangin' wit da foxes I saved. 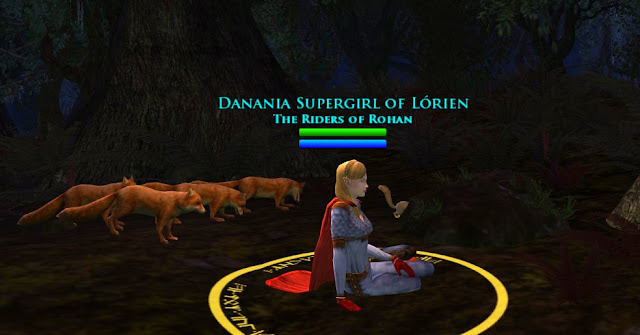 Parphad is the scholar instance. It seems to attract orcs or other baddies about once a day that need to be removed. 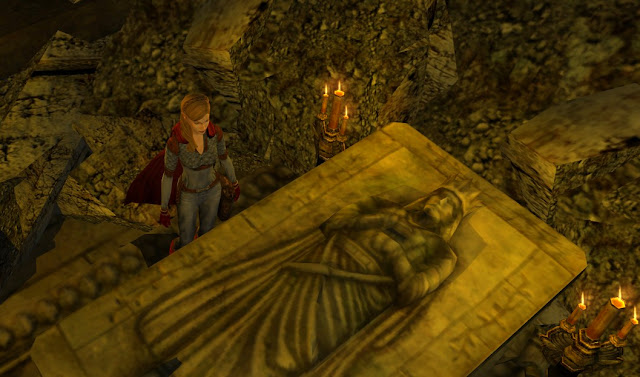 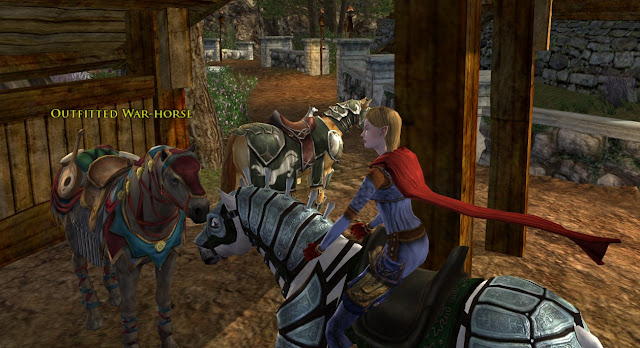 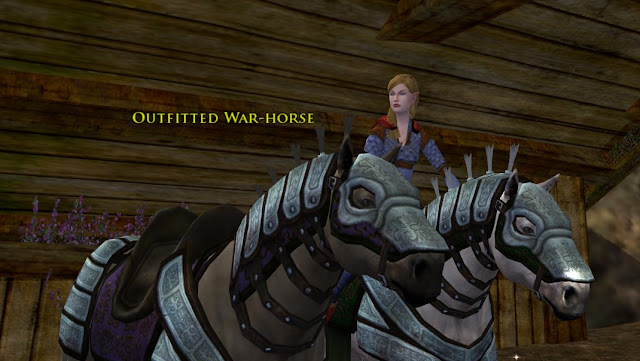 I got a small chuckle out of the fact that we had to hire Rohirrim to barter the RK armor as it was a deal made with the Rohirrim Workers’ Union. The deep words are not for the Race of Men, what do they know about Rune-keeper armors? :) Dalmann, Hrofgyr, and Rungat keep a good selection of armor and the barter price is fairly cheap. 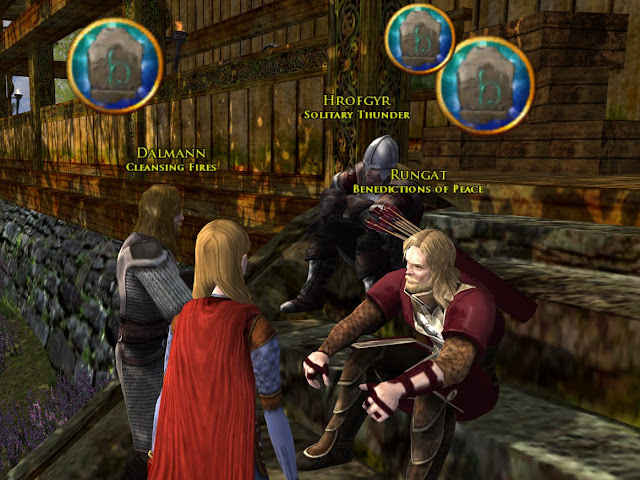 During the “Scenes” article, I indicated that when I became a Thane I would have a hall like Fastred’s. Here is one of the pictures of a large tapestry that came in and I had just gotten it hung from the ceiling. Stay tuned… next article I will show you how I fly around the hall! 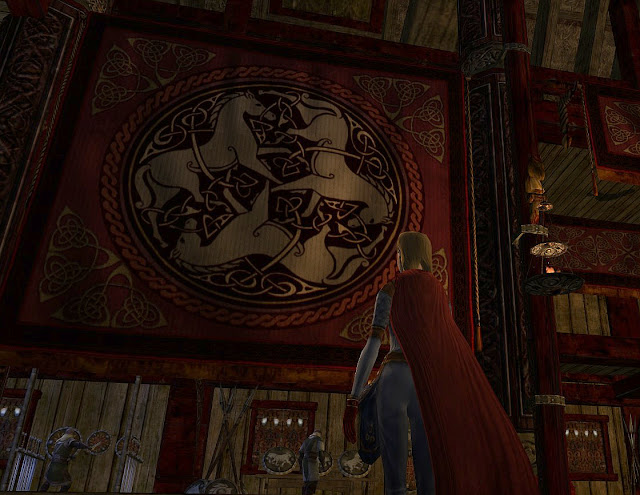 hey look! not spam!
while I'm still a long way off from this I can't wait :) Thanks for linking that guide, I'll keep it in mind when I eventually get there :)

Being a pint-sized Thane myself, I needed all the help I could get. There wouldn't be confusing quest lines to get your gear, without an associated helpful plugin. The Hytbold Assistant (http://www.lotrointerface.com/downloads/info806-Hytbold_Assistant.html) helps to track your progress toward full completion, and let's you know what quests need to be completed to obtain your class gear.

(channel old-timer voice...) Back in my day, we used to have to go out to the net to look up a Guide... you kids have it easy with your new-fangled plugins right in game...

Woohoo! THE famous Lilikate!
Critters will flock to my bloggy door!