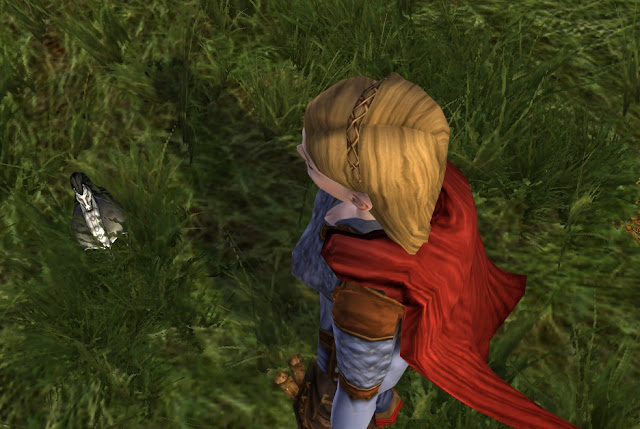 Hello again! These scenes pick up from rohan-scenes-from-rohan-part-2.

Why did I start this set off with a picture of a Rohirrim helmet? Was it because I had just pounded that wearer straight into the ground? hahaha! No no... I just thought it was cool looking. It is just sitting out in the grass. I think someone must have dropped it? Yeah... that is very random, lol.

I could have started with a picture of a statue of a rider. It was in one of the instances along the way and I thought it was neat. I want one for my house. It would be even cooler if it was life size. Better yet, it would be even cooler if it was an actual Rohirrim who was there just to hang out and patrol my yard. I haven’t checked the Quartermaster to see if any Rohirrim (or statues) are for sale. I did see notes from Update 10 which might be released soon saying that there will be a "Rohirrim Property Guard". That might just be a match for my "Female Elf Property Guard". 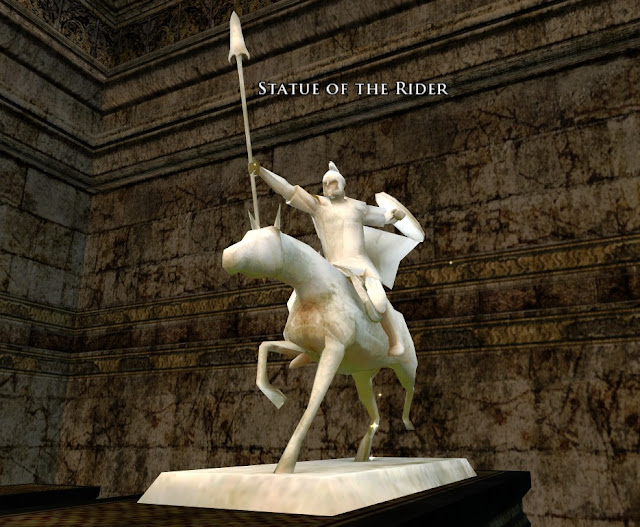 Alas, another day, another Thane. Here is Thane Beortnoth of mumble mumble (I don’t recall what he is thane of). Do you like my fancy horse Beortnoth? 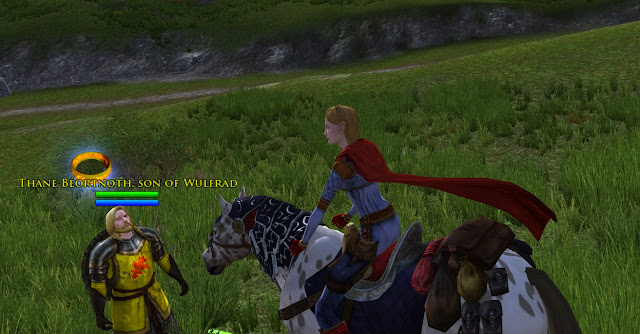 Hey! Theoden! I know your name. You look down frowny brown? 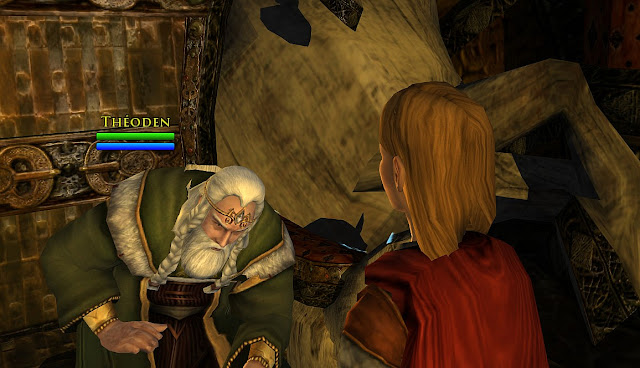 Eowyn, what is the news, Gnus? I have foreseen that you will do great things... yes, my RK foretelling skills are that good... 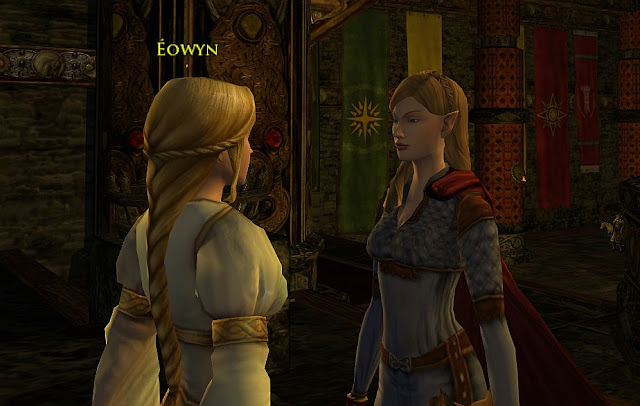 Booo Grima. I know your name too, and that is not a good thing in this case. Hold me back, Horn, lest Grima get a full measure of /slap.

Le sigh. The things I will do for a quest. Here I am, standing in the cold drenching rain, acting like a scarecow. Must I? Really? Fine, I will be the best scarecrow I can be. I thought the picture turned out good at least. 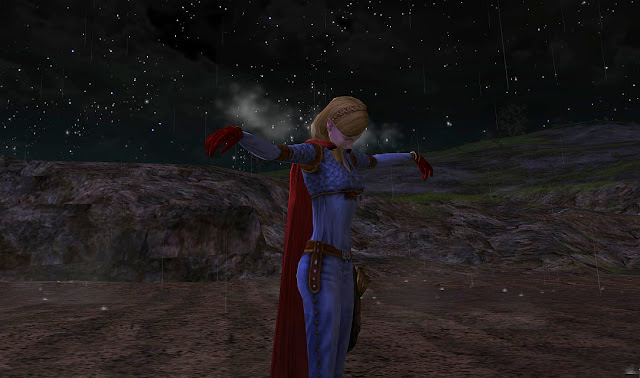 I make a new friend named Fastred. Like most, it took a smack upside his head at first to gain his respect. I think we shall go look for adventure. 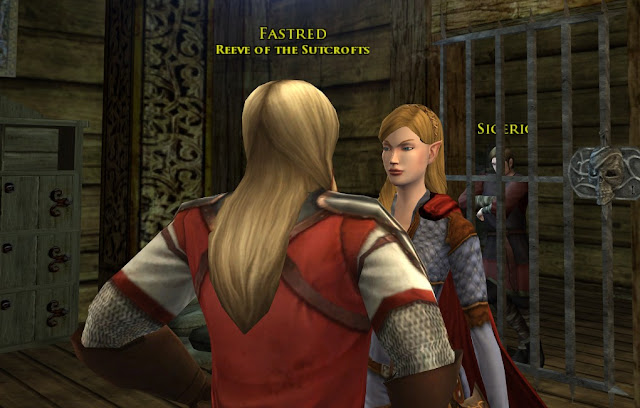 My four homeys I met in Harwick (we are now known as "The Riders Five") and helped sneak out of Cliving in Part 2: Hutha, Leofdag, Burnoth, and Ulf, plus Reeve Fastred, prepare to go ahuntin’ for bad guys. I feel left out since I'm the only one without glowy ground beneath me! 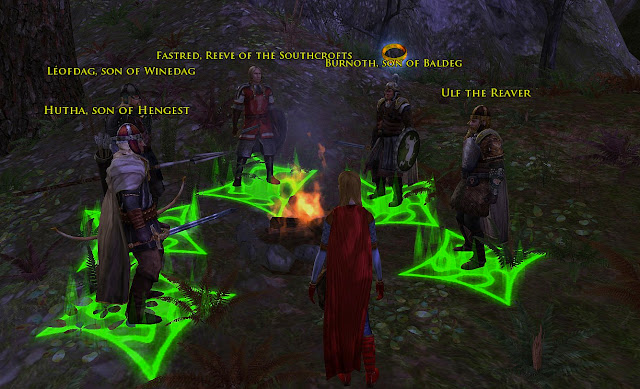 We found a big bad guy! He is big even for a troll, but I like our chances! 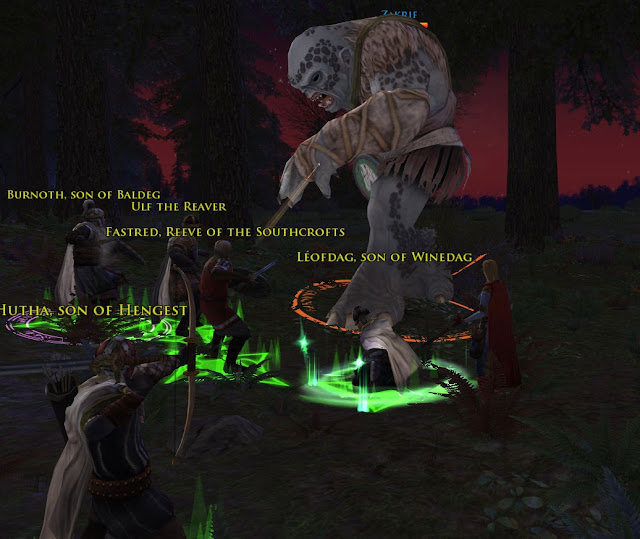 I decided that when I become a Thane, I want my hall to look like Fastred’s Hall. 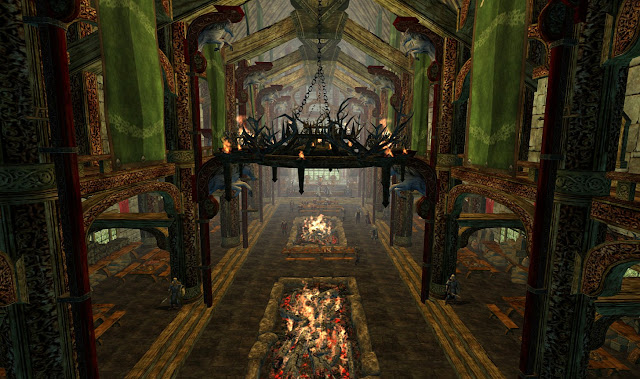 His house is nice also. He had some nice maps on his desk. I took copies of these two. I hope he doesn’t mind. I bet someone out there knows what is on the maps... any guesses as to what these two maps are? J

Oh, Mysterious Wanderer… I shall seek out Hytbold next and am excited for the adventures that lie ahead! 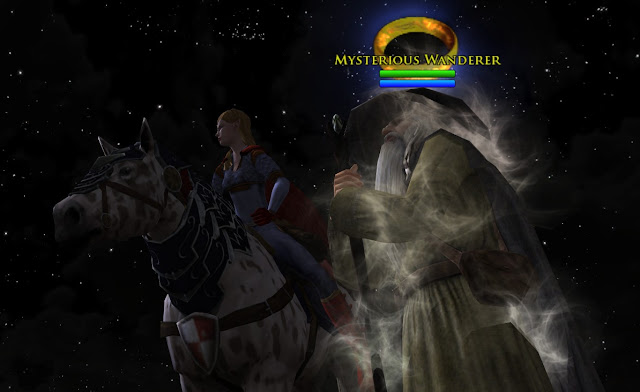 If you'll have finished to build up the complete meadhall in Hytbold (and so became Thane of Hytbold, Thane of the Eastment), you will have an even more impressive (and more detailled) meadhall than Fastred. I think it's the most detailled building in whole LOTRO, you're going to be happy about it. :)

I would love to see some of the Rohan female hairstyles incorporated into the barber shop. Probably won't happen, but I can dream!

I love the scarecrow shot - came out really well :) it was a very funny, if undignified quest ;)

I think my favourite questline in Rohan was the series with the Riders Four, I wish I'd taken more screenshots of them, I think I was getting carried away with the story and instances! I hope we see more of them in Western Rohan, the instances with them were just so much fun.

(oh, I guess you've already done this but if you continue the questlines in Eaves of Fangorn, story continues with the mysterious wanderer - I had skipped initially in favour of faction areas and I really enjoyed coming back for that reason)

This may seem odd but I like the first picture. It makes me imagine what happened there. Maybe it was a fight that didn't go well and the owner had to run away in a hurry then the helmet fell.

I feel kinda sad for Danania to have to work as a scarecrow though. Even more so because it was at night and with rain!

As for the map... It looks like the Shire? Hm... I guess I need to re-read the books. I don't remember this part well. But then again I do have a terrible memory. @_@

@ Gorothir - your comment makes me smile every time I read it. I chuckle to myself, knowing the "story-bridge"... (don't tell the other readers but I became a Thane months ago, back in mid December, but that doesn't setup for as compelling story giving away the punchline when I can build a rivalry with Fastred out of it first, hahahaha :D ). Cheers to you for seeing the potential arc!

@ Aeronwy - Always great to see you around! and it took me a moment to gather what you meant about female Rohirrim hairstyles. I do like Eowyn's hair! I could totally get into the nice long braid look. I was probably too distracted by the many horses to notice the hairstyles though, lol. To each her own. :)

@ Suzita - You know, if I had to pick one, I think the chain with the Riders Four was my favorite also. :) They seem like a fun group of people to hang out with. We will hit the Prancing Pony together next time we are back in Bree.

Indeed, the mystery man and I wandered mysteriously through Fangorn. ;)

@ Rakuno - The sign of a creative mind, determine how many story lines you can start by finding a helmet out on the grass. :)

Alas, hopefully Danania will not have to make her permanent living out of being a scarecrow standing in the cold rainy nights. There are worse jobs, but it is hard to think of one as the cold rain soaks into the linen outfit and I would rather be sleeping than scaring crows.

As for the maps, I was originally figuring it might be somewhere in Rohan. What other area should Fastred be studying in the maps??
I do see it however... ;) ... and I'll give you the hint that it is north of Rohan. hehe

Of course, that begs the question of what is Fastred's intent here... to study the land, or is he plotting a devious plan?

I recognized the maps at once: Stangard & Great River :)

I didn't actually recognize it at first, though the Great River map is very distinct looking.

The question still remains... why is Fastred studying these maps? Are they merely from a tour of the area? Is he a Cartographer? Is it something more sinister?

Hold me back Horn,lest Grima get a full measure of my /slap
Lol