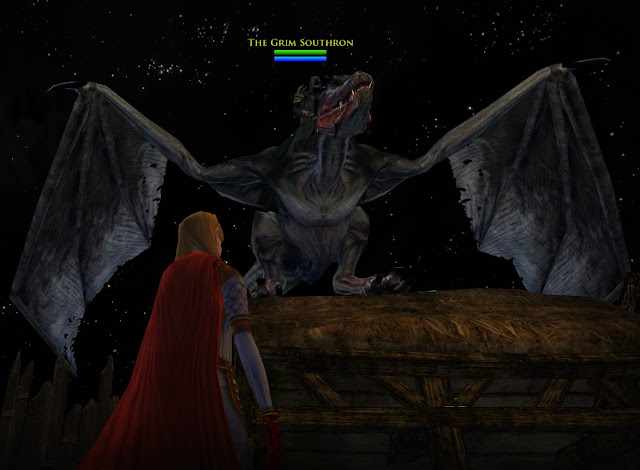 Picking up from rohan-scenes-from-rohan-part-1… Egads! The flight from Langhold went smooth… hehe.

Along the way, I met the Grim Southron. He is not the most pleasant fellow. He is definitely not going on my Christmas list. 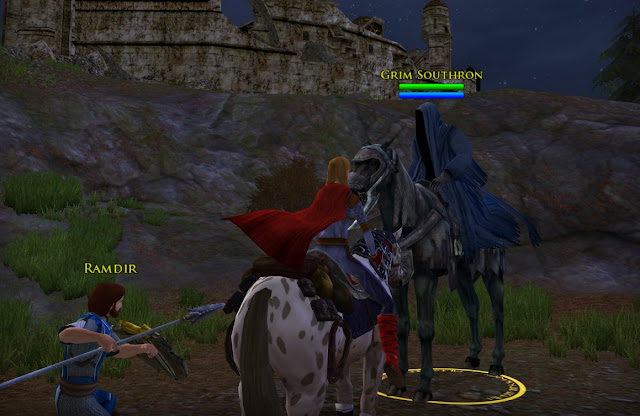 I met more people that were nicer, including Utlac. I really need a Who’s Who directory to keep notes on all these thanes, and reeves, and sons of that person, and daughters of that other person. Don’t tell Utlac but I have no recollection as to who he is. 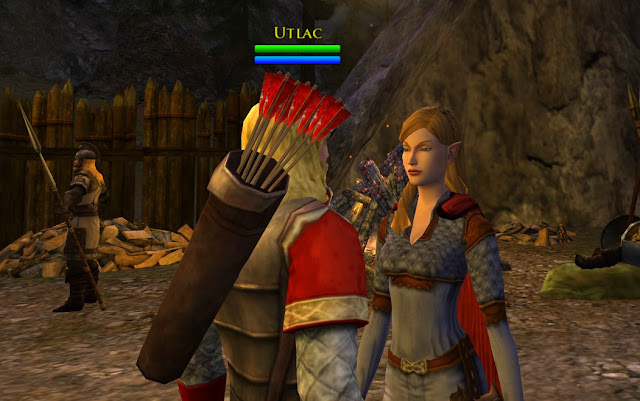 Cliving looks lovely under a pink sky. I took this shot from one of the towers. 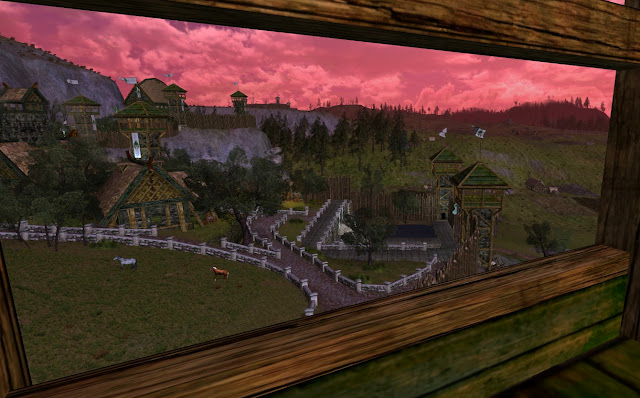 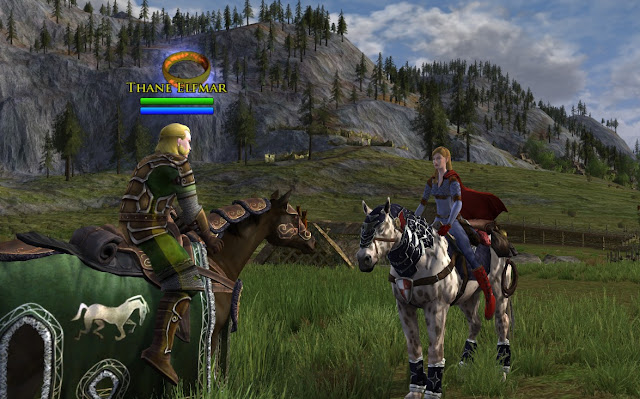 He later challenged me to a fight. Silly Thane, you might have elf in your name, but I’m your huckleberry. A second bout would end similar to the first... best 4 of 7... good luck with that. 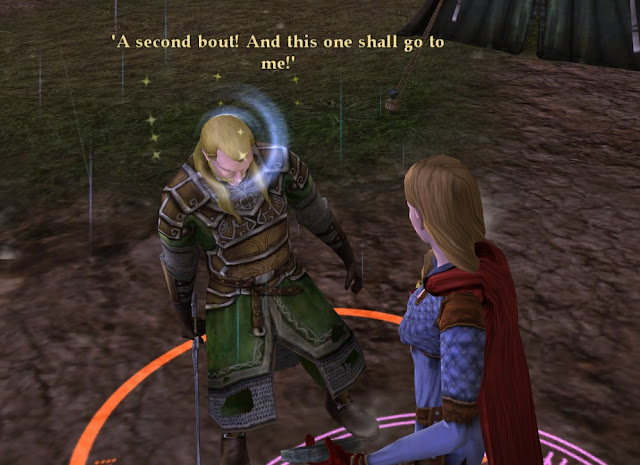 I left Nona, and Horn, and Corudan in the part 1, when they were looking on an encampment. Corudan tells me that Nona and Horn are getting along just fine. 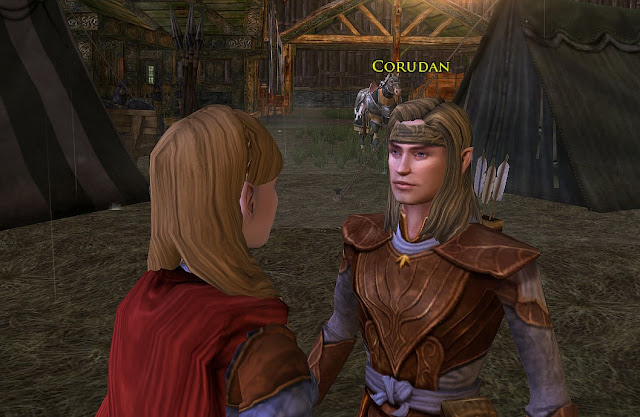 Yeah… I can see that… those two look like they are doing quite well as long as they don’t kill each other first. 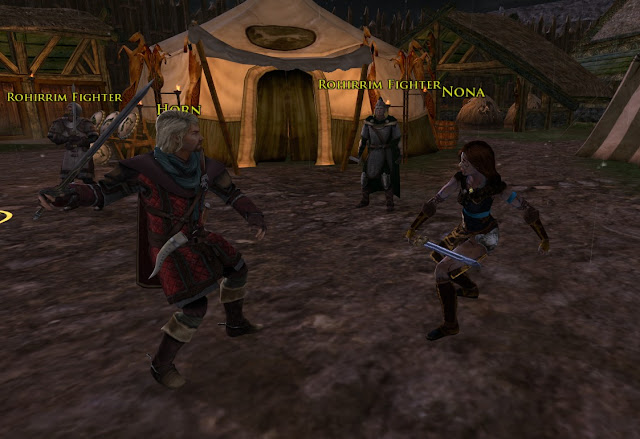 In Harwick, I made some more friends: Burnoth, Leofdag, Hutha, and Ulf. By Cliving, they needed to skip town. I don’t recall why now; gambling debts, horse rustling?? So, the five of us prepare to sneak out of town. Sneaking is not my strong suit; if it was I probably wouldn’t wear bright red and march through town like a parade leader. 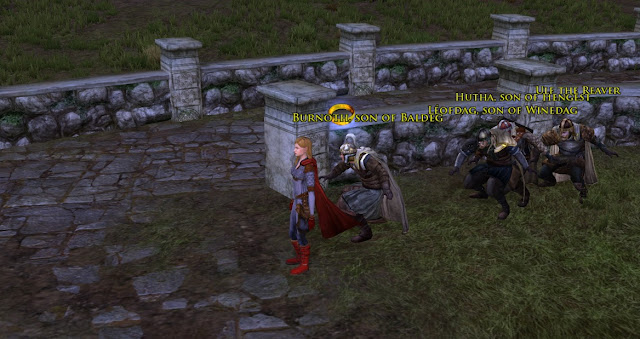 On the other hand, I can be distracting. To that end, in the EttenMoors, I am called “bait”. Here I am distracting the town guards while my friends slip away. I think we will see one another soon? 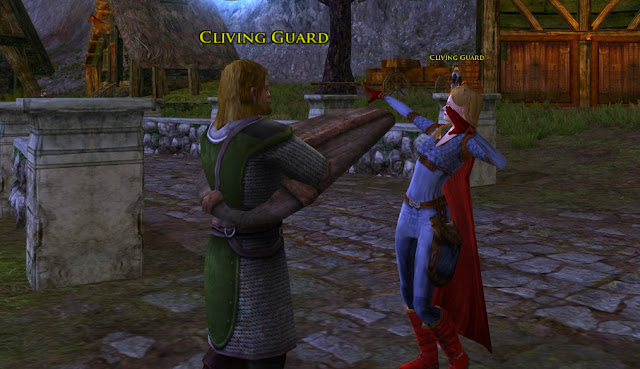 Oh geez.. the men sneaking out of town.. so bad :P And nice clipping of the shield through the body. ^^

Hahahaha Lothirieth. I saw that shield "clipping" and put it out there wondering who would notice. ;) I think he was less distracted by me and was more distracted by the large shield cutting him in half. Geez, that looks painful. :D

Horn and Nona are getting so well they decide to do a friendly spar. With sharp swords. And angry shouts. And bloodthirsty eyes. Yeah....

I also bet he was trying to distract Danania with it so his friends sneak out of town!

Hehe, at first I was trying to figure out what was wrong with his arms.. then saw it was a shield! ^^

I have some screenshots of one of my party members painfully skewering herself with her shield as well! :D :P