Rohan: Land of Horses! (too) 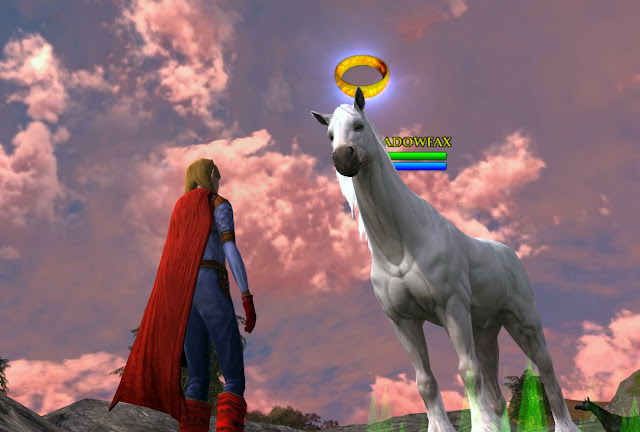 Yay for the continued celebration of Middle Earth Horses! Picking up where I left off in (rohan-land-of-horses), here are a few more horses hanging out in Cliving. 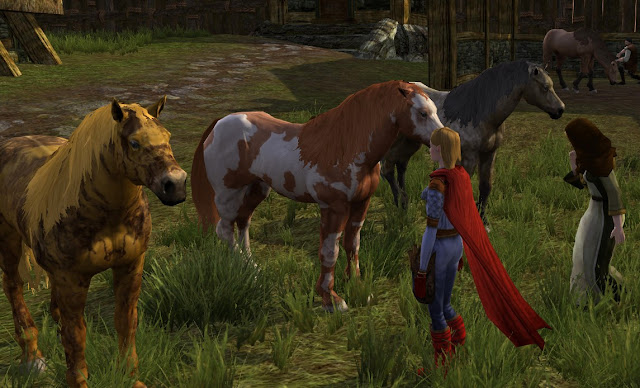 Ok, sometimes I get more excited than some visiting with the Stable-Master’s horses. Here is one I met north of Eaworth, at the lone location between Eaworth and Fangorn Forest. He is wearing the Steed of the Champion caparison (All-the-Steeds/store-steeds). It is such a simple thing, sans saddle and halter, but looks so sharp! 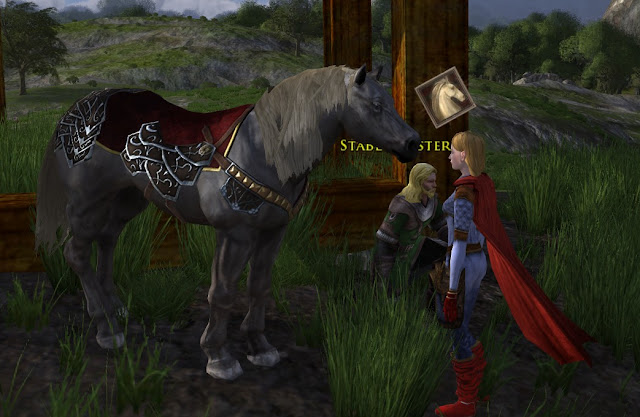 Here is a steed I was trying to rustle away from its owner. The Grim Southron kept back-peddling; I think I tipped my hand when I was paying less attention to him and more attention to the horse. He must have seen the Horse Gallery and known that I had ulterior motive. 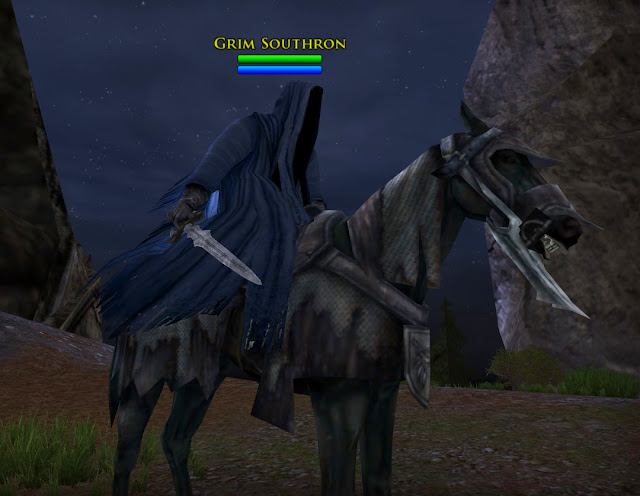 In the previous installment, I did leave off with a teaser that you would see some famous horses show up at danania.net. I hope not to disappoint. Here are a set of three that agreed to make an appearance; and here is a great link that discusses some famous horses of Middle Earth at (http://lotr.wikia.com/wiki/Horse).

Arod is first up. He carried my friend Legolas across Rohan. He is such a clever horse, cracking me up with “knock-knock” jokes. He also loves to rattle off the “Mister Ed” theme song… “A horse is a horse, of course, of course…”, which apparently the herd gathers to watch on DVD every Tuesday night at 9pm (http://www.imdb.com/title/tt0054557/). 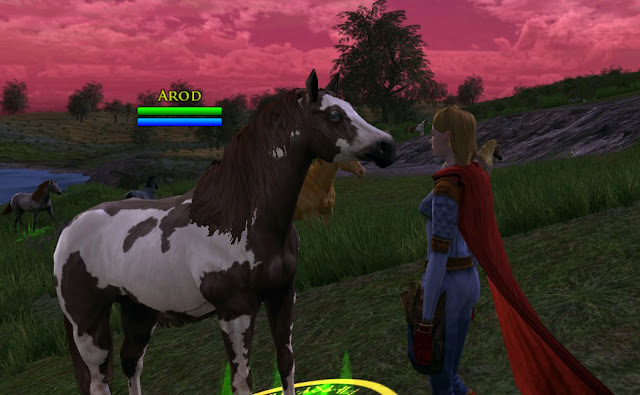 Hasulfel was with Arod and carried Aragorn across Rohan. He said he was quite a fast horse and had been looking forward to challenging Supergirl to a race across the plain. Arod was being a trickster and stood on my cape at the beginning of the race, lol! As you see, Hasulfel beat me by a nose. 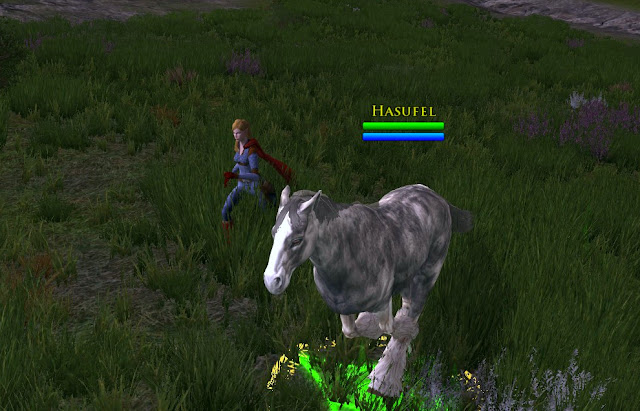 Shadowfax, chief of the Meras, liked my moxie. As he can run faster than any other horse in Middle Earth, I had to challenge him to a race as well. This time with no trickery I fared slightly better. J I was honored to run with him and respect that he is lord of the herd. 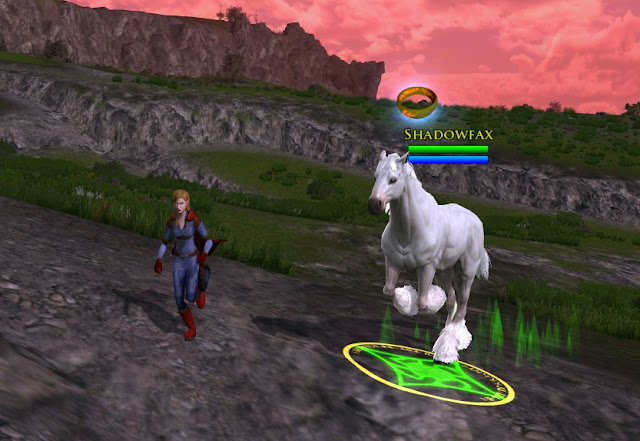 Framferth is Thane Fastred’s horse. I think my horse is smitten. 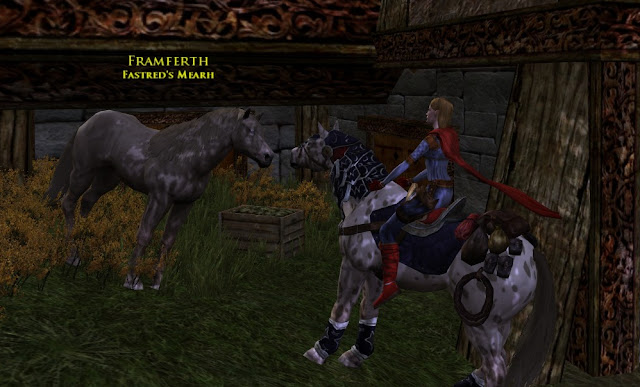 Here is where I got a fancy green banner, called the “King’s Banner Accessory”. It is an award from the Epic quest Book 9, Chapter 8. Neither the green flag nor the brown haunch-piece is dyeable, so it wasn’t really an accessory for me. I do think more flags are warranted as accessories. Mebbe, the Steed of Minas Ithil would be a great choice to make into a Warsteed. 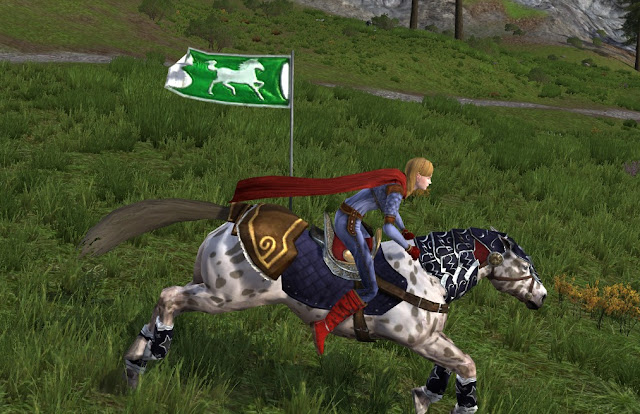 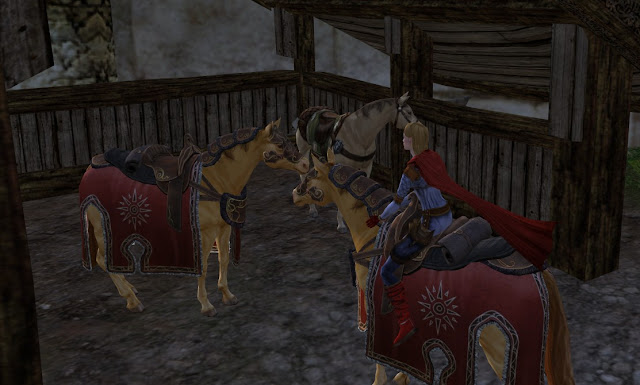 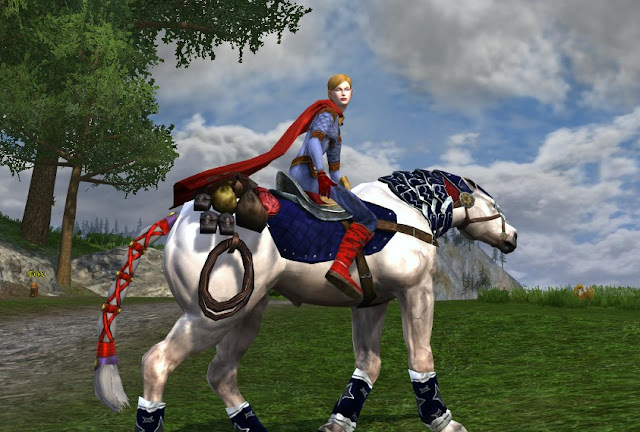 New Bree has gotten busy since it got a facelift. Granted, I don’t go to Bree often, but I see that horse parking is at a premium! 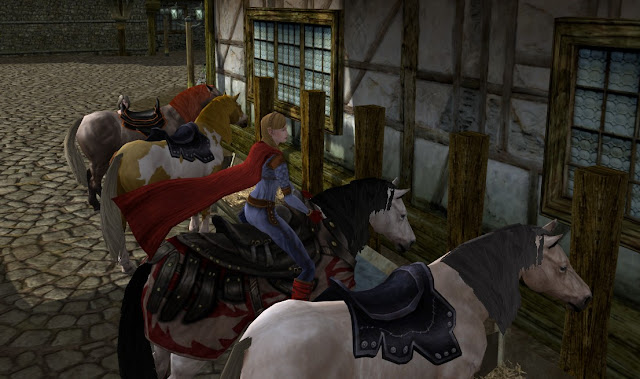 Here are a few people I saw looking dapper on their warsteeds around Rohan.

Rruin and I compare the craziness of heavy versus light warsteed sizes. Note that Rruin is a dwarf; he sits high and proud while riding a pony. It is a heavy pony, which makes it bigger than a normal pony. However, the heavy PONY is a LOT bigger than my light HORSE. I find the size difference to be such an odd thing. My light horse works for me quite well as a RK. (referencing the traiting guide rohan-warsteed-traiting-part-5). 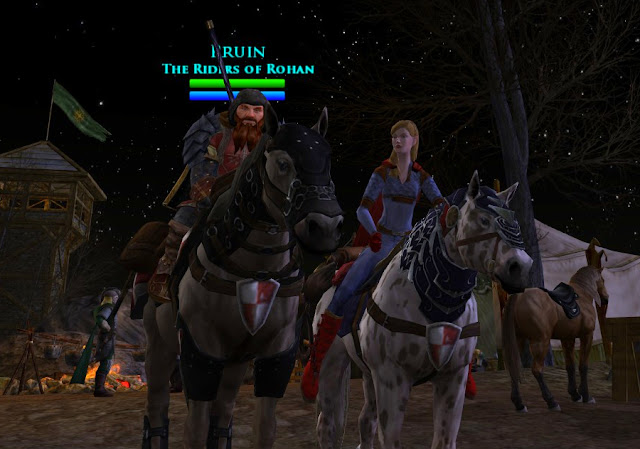 Macswife shows off her fancy horse decked out in Burgundy as she wears a perfectly matched outfit. 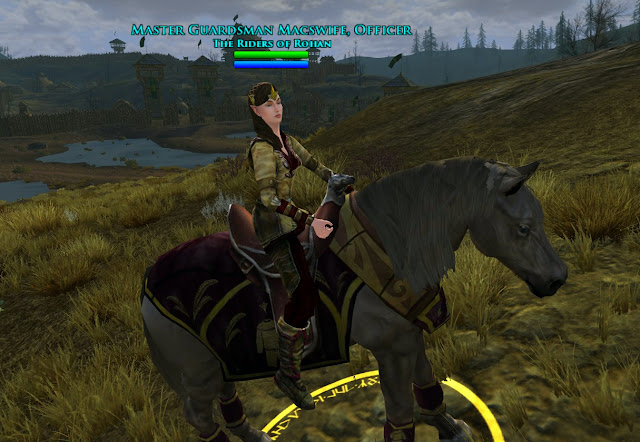 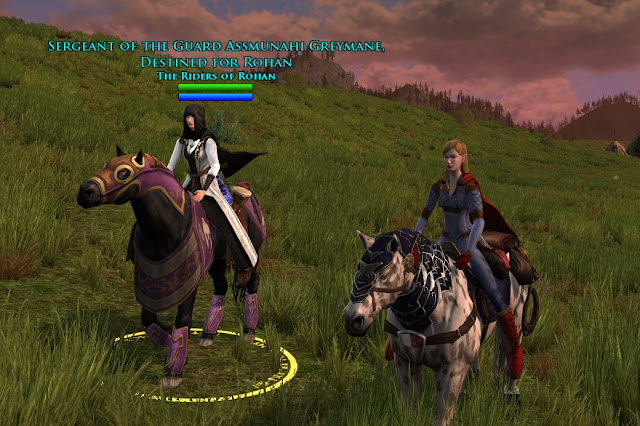 Commander Drendolith shows off the Bone warsteed outfit, along with the green King’s Banner Accessory. 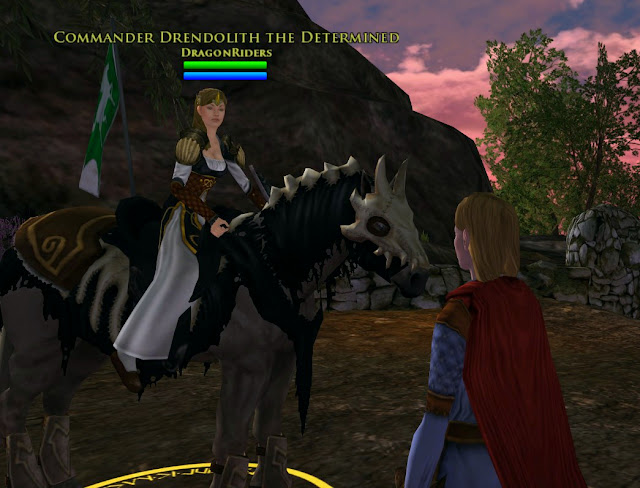 Caramelkr looks like she is heading to a party. She rides the Warsteed of the Captain, red dyed cosmetics, dressed on a Black Tobiano. 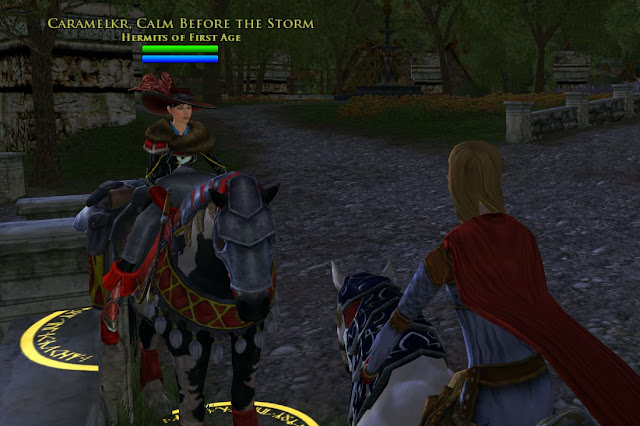 Does this next picture answer the question of how I have so many horses in the All-the-Steeds Gallery (All the Steeds)? Hahaha, no, I am not a horse rustler! Well, not exactly. That was a fun picture though helping bring together a Wild Horse with a new Rider to enjoy him. J 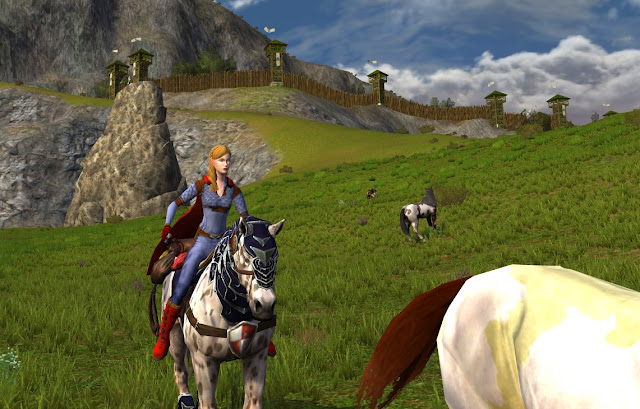 May you delight in your horses and enjoy the ride across Middle Earth!

Love the pictures and all the horses! I have loads stored on my pc as well without anything to do with them. I just love what they look like. :)

I also get a bit more spam nowadays, and I heard other bloggers complain about it as well. Hopefully it's just a temporarily thing. I really don't want the capcha thing, as I know it's one of my annoyances when commenting on other blogs!

Yay Ravanel! Thanks for the comment; its good to see a non-spam. lol! Totally ditto concerning the capcha. I'll leave it off and just endure the spammers to make it easier on visitors. :) (I say that now... but I can see that if one was getting spam-swamped, one might have to take more drastic measures. hehe)

all the pretty ponies! I can't wait to get to Rohan :D

Since they announced the Riders of Rohan expansion, I wondered if Shadowfax would appear in some form. Glad to see he did and to see there are other famous horses making their own appearances there too. :)

@ Alysia - hehe. Of all the zones, Rohan is by far my favorite. Enjoy the journey, but look forward to the experience. :D

He was also in the Horsing Around line of quests out of Hengstacer, that came with the Rohan pre-order. The shots in this article were taken in Fangorn, in one of the quest instances.

Thhhiiissss gaaaammmeee is LOTRO = Lord of the Rings Online, aka Danania's World where I rule Middle Earth.