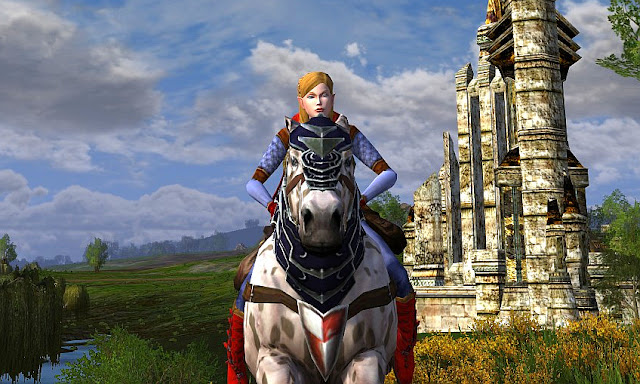 Now at level 85, several gear pieces needs to change. I will go through my thought process and explain why I make the choices I do so that you can benefit from it (or decide you do not agree with me).

First on the list to discuss is new armor. It isn’t all about being the shiniest, but I want to give some perspective on what each set looks like statistically.

For review, I have done this type of evaluation before. For level 75 Moors (ettenmoors-75-rk-armor-audacity) and for level 75 raid gear (lotro-stat-math-rk-gear).

To put the data right up front so we can review it, the first table shows the 13 “best” Runekeeper armor sets in the game. There are other non-set armor pieces that are quite good, but for article focus, I am only presenting the data for the full sets. As indicated before (see links), I am only going to present the four most important RK stats: Morale, Tactical Mastery, Critical, and Mitigation. I picked Tactical Mitigation for the table for simplicity though having good Physical Mitigation and Resistance can be equally important (or moreso depending on the foe).

This data leaves out one potentially important piece of the puzzle. Set bonuses have features that are not as easily quantified by stat calcs. There is a minor buff at 3 pieces and the cap buff at 5 pieces worn. Here are the non-quantifiable set features. I highlighted some of my personal favorites in Bold.

Table 2: Set bonus features for the 13 RK sets in Table 1

So, the question becomes do any of these set features in Table 2 outweigh the number sense of Table 1? What is your style, and what are you trying to achieve?

I can make Table 1 a bit simpler. First, let me turn it into a pivot table and show deltas from the “worst” of the 13 sets. Second, I am going to convert each of the features into their corresponding % counterparts. Meaning, instead of tactical mastery, I will use % damage increase, and so on. (For reference, I used 305 mastery per 1% Damage as it is representative of the portion of the curve from 27k to 35k tactical mastery. For someone at less than 27k, the curve is linear at 270 mastery per 1% Damage. Checking this...)

“Clever counselor” (the draigoch armor) focused very heavily on max Will (mastery) at the expense of Morale. Early in RoI, I saw too many RKs that were loaded up on Will and had no balance. Sure, they might hit hard, but they were easily one-shotted even out on the landscape because you can’t build a character with such low Morale and truly expect to not get whacked. So, moving on to the comparisons…

Hytbold Comparisons: Of the 3 Hytbold armors, for pure statistics, the Cleanser and the Thunder-caller are identical. The Peace-caller has +114 Morale and does +4% more damage (& healing) output, with 1% less critical chance and you are taking 2% more damage from worse tactical mitigation. So, is Peace-caller the answer?

Reflect back to Table 2. Peace-caller’s buffs were “Writ of Health has 25% chance of +563 armor bonus” and “+10% healing”. This set is the ideal set for a Healing RK and a strong choice for a DPS RK.

However, Thunder-caller’s buffs of “+5% Shocking Words stun chance” and “Epic Conclusion recovers Shocking Words” have my attention. When I saw the bonus that had me use my #1 favorite skill to recover my other #1 favorite skill and allow me to use it more often I decided I could not pass that up. Too bad it cannot be effectively used in the Moors due to the strong incentive to get Moors Audacity from the Moors armor (visions of fried wargs were dancing through my head…).

I chose the Thunder-caller, because that is who I am and I really wanted to try the set buff. I can very much appreciate the advantages of the Peace-caller though. I am really enjoying the “Epic Conclusion recovers Shocking Words” and am using it a lot.

Basically, I see no split-set benefits and the set buffs are good enough that making a full set is actually something RKs will “want” to do for a change.

Moors comparisons: Of the 3 Moors sets for level 85, the Tranquility armor has the best stats. From Table 2, the Tranquility buffs are very “meh”. Really, how often are you casting “Epic for the Ages” in a Moors battle? It happens more now that the induction isn’t so very long, but you are not using it often.

For the Moors at 75, I went with a blend of 2/2/2. I am on course to do the same at level 85. The last row on Table 3 shows how this 2/2/2 set compares. Effectively, I put little value in the Moors set buffs. To know, it does matter which 2 you chose from each set. The 2/2/2 I chose optimized against Morale. It was Tranquility Robe and Hat, Scalding Wit Gloves and Legs, & Thunder-struck Boots and Shoulders.
Posted by Unknown at 9:21 AM

Lucky RKs! The Captain set bonuses are kind of terrible, especially compared with the Orthanc gear. Our Hytbold bonuses are nice, but the Orthanc bonuses were game changing.

For Captains, I'm liking the Hytbold Healer set, which gives +5% healing output and reduces the cooldown on Valiant Strike. That's pretty good, I guess, although the VS cooldown reduction affect was on the third piece of Menestaid armour, but now it's on the fifth piece of Hytbold Healer...

I shed a tear for Dagor's three-piece bonus, though. Blade of Elendil reducing the cooldown of Shadow's Lament was the second best Captain set bonus in the entire history of the game, behind the insanely overpowered defeat response cooldown on Helegrod/PvP-Perseverance.

Captains are uber exciting; mebbe the next set will be more favorable for you. :D

Hytbold marks the first time I have gotten a set of armor since Moria (and then, I could only acquire 4 pieces). You can see that the RK set bonuses have not been favorable.

Some might not even like the Thunder-caller's “Epic Conclusion recovers Shocking Words” enough to outweigh the morale and DPS benefit of Peace-caller. It works for me though so I make the most of it. :D

This is my first visit but I love the information you have laid out. I was out of the game for a bit and appreciate being able to map out my armor before getting it.

It will be interesting to see how Update 10 changes things, but at least you will be getting bonuses from armor sets at 2 and 4 items. An added benefit to your 2/2/2 build for the moors.

Yay! Thanks Matt B!

Yeah, I've been looking over the site noticing that some of my visited articles (like this one and lotro math and RK posts) are going to get outdated when the devs flip fate/will/power stats on their heads for Update 10 in March-2013.

You can be assured that I will get to rewriting some of these posts with updated intell once it goes live. :)