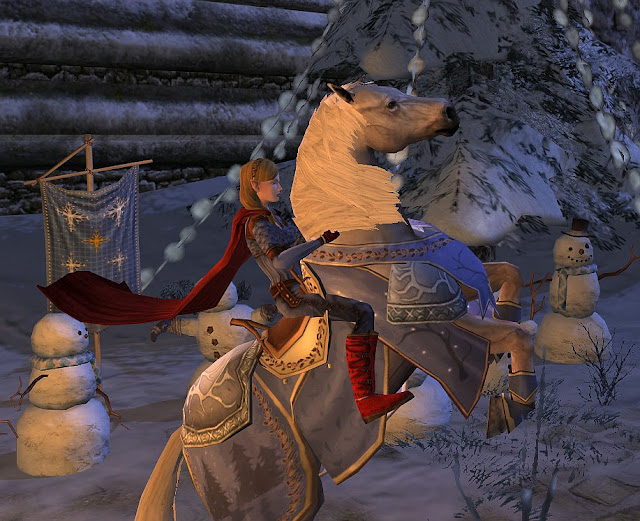 Ah, Yule festival. Another festival came and went, and like the ones that came before, we celebrated the heck out of it! As always, I will put my stamp on it by writing a festival wrapup. :)

Yule festival 2012 got a lot of notoriety for being called a “grind fest”. The crux of the issue was that the best stuff was gated behind a requirement of having done 120 total quests during the 2012 yule festival. Since we had been at Yule fest last year, there were only repeatable quests, 14 of them per day. That meant that one would have to visit festival at least 8.6 days to be allowed to barter for the Warsteed cosmetic, a couple of the clothing cosmetics, and get the special character portrait ring (wintry-yule-warsteed). The festival was extended by a few days (to make up for a couple of server side issues as it was explained).

So, final tally, visit 9 out of 20 days for the goods.  The only improvement I would have had is that the festival was too short. As a rough rule, I think that visiting one out of three days to get the goods would have been a good target and that festival should last about 28 days. So, the 120 quest number felt ok, but the festival felt too short. 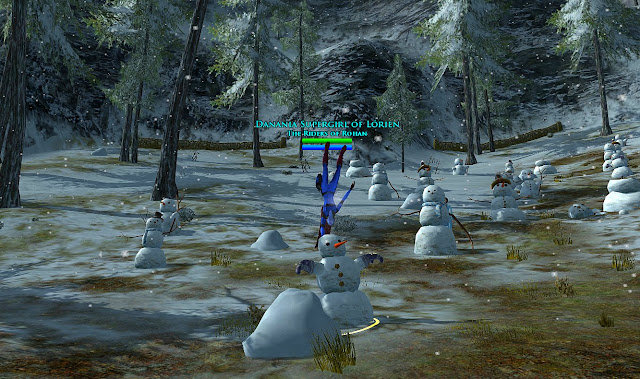 For me, it didn’t “feel” grindy at all since I didn’t travel during the holidays. I would have been remorseful had I been gone for weeks and missed it. It is a possibility since it was a “holiday season” and I am sure that some people got pinched by the shortness of the festival. I can totally empathize with their dilemma.

During festival time, if I visit Middle Earth, festival is what I do, and sometimes I never leave festival to do anything else. It is like a “vacation” from wherever else in Middle Earth I happened to be.

The previous 2011 Yule festival was far more “grindy” feeling. The reason was that in 2011 I was given unlimited repeats on the quests so there was no push to leave after say, 14 quests. And, Yule fest 2011 was the first yule to offer the “consumable” deeds, in which one gained an emote by using the consumable 300 times. The consumables were costly enough that it took a while to earn enough tokens, there were a bunch of the emotes, and the real kicker was that many of them were on a shared CD timer… of 5 minutes. Bleh.

I wrote about my shock and dismay over the consumables at last festival, youll-yule-festival. I am happy to say that I have enough consumables now to actually finish the deeds. Granted, it might be Spring by the time I can get through all those 5 minute timers, but at least it will be before next Yule fest. :)

I enjoyed going back and reading about the previous Yule festivals at youll-yule-festival from 2011 and fun-of-yule-past which was a look at 2010.

Two of my favorite recurring parts were the Bumble Monster and the Snowman Army Invasion.

2012: The Bumble Monster:
Here is an excerpt I wrote in 2010. Back then, the abominable snowbeast had not come to town. I went to the Misty Mountains and invited the Bumble Monster and his friends to come join us for Yule festival.

It is tough to be the antagonist, isn't it?
You just got a bad rap! A little bad publicity set you back generations.

Those deer shouldn't have been wandering nearby. I know! Deer's good eatin'!
You probably wouldn't want the red-nosed one anyway. I hear he's a misfit."

Sure enough, he came in 2011 and again this year! He pretends to be grumbly but I'm glad to wish him /cheer each day. 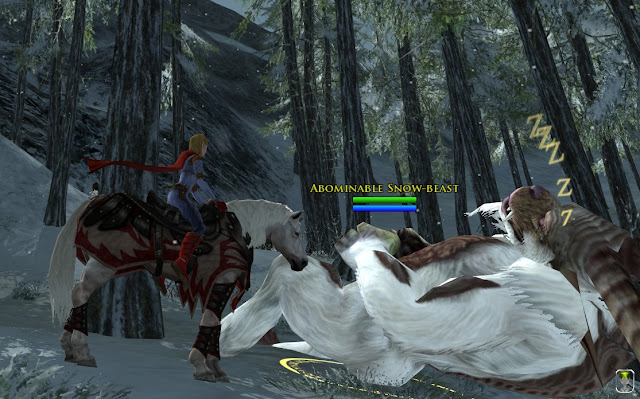 2012: Danania's Army:
My snowman army is growing! In 2010, the snowball fields had been established. I went "William Wallace" and inspired an army of devout snowmen to march toward the town.

The north wind blows bolstering our numbers!
We shall usher in the winter fest and fight back the sun!

"I *am* Danania Darzil! And I see a whole army of my countrymen, here in defiance of tyranny. You've come to fight as free snowmen... and free snowmen you are! What will you do with that freedom? Will you fight?" ~Danania Wallace"

By 2011, my undercover-general Virgil Greenfield had enlisted visitors to Frostbluff to create new snow-life, even closer to town! By 2012, you see that the snowman army has breached the gate and prepares for the in-town siege! By 2013, we hope to overthrow the corrupt Frostbluff mayor and establish a new rule and order. 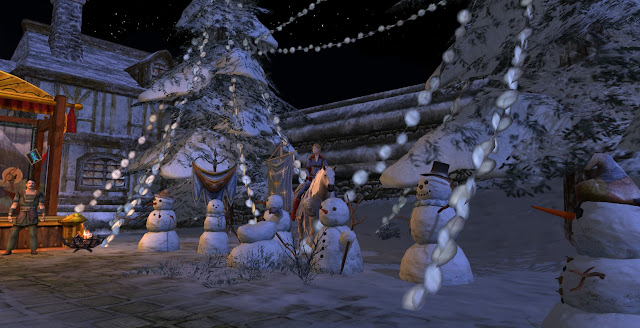 I will be back next time to wrap up with my yule festival scrapbook!