Crafting toward Mordor with a Universal Toolkit 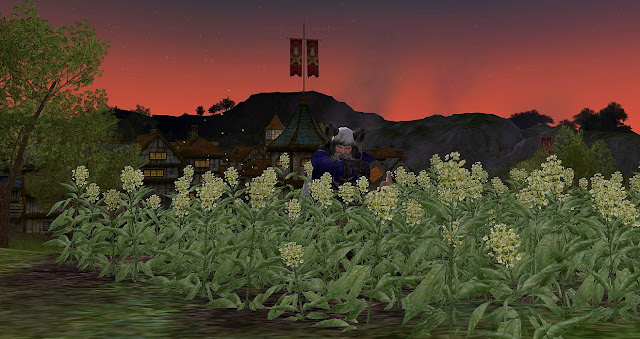 This article could also be titled craft-leveling in lotro. One of the subtle changes that came about with Update 9 in December-2012 was that crafting now gives leveling XP.

That significantly changed how Team Dana works. You see, I am an adventurer but I have a support staff of 9 lildanas (lil-danas). All of the crafting materials I have gotten in my adventures end up in the hands of the group, who craft with them or horde them away for some future use. With Update 9, that future use is now.

My five main crafters: How big of a deal is the ability to craft-level? At Yule festival 2012 a month ago, the five main lildana crafters were all level 25, now they are level 35 to 38. They sat in the various craft halls nearest to their Guilds and came out for a couple of minutes a day to make crafted relics out of the abundance of materials I found while adventuring. Update 9 opened up leveling opportunities for these lildanas that had no intent to adventure. Not to put too fine a point on it, but the team had an abundance of materials stock-piled and are working through inventory.

The hobbit quads: The other four lildanas on staff were the hobbit quadruplets, who mainly hung out in Thorin’s Hall as greeters, and had various jobs like “Chief Festival housing item Organizer” (CFO), “Clothes closet Analyst”, “AH Buyer”, and “Danania’s personal loot Assistant” for items that overflowed out of my inventory. All were level 6, having just made it out of basic training and carrying no weapons; now they are level 17 and looking forward to level 20 when I allow them to get Horse Driver’s Licenses at Hengstacer. 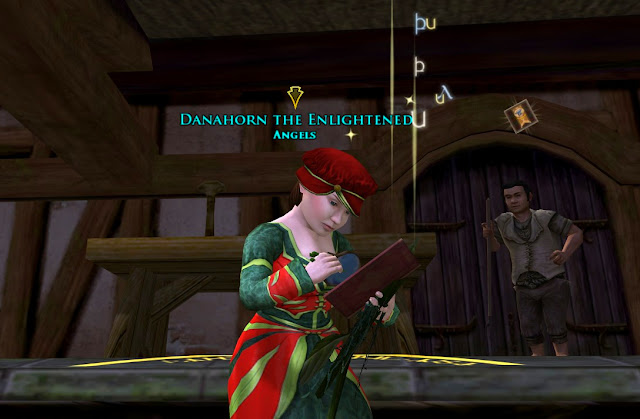 Consumers: What we noticed was that Jeweller, Woodworker, Metalsmith, Weaponsmith, Scholar, and Tailor were all Consumers of materials. Ok, technically, Jeweller polishes gems, but then most of those gems are worthless as NPC-fodder; there just aren’t enough uses for polished gems to make it worth keeping thousands of polished gems around. At some point, we will reach an impasse where craft-leveling is not sustainable due to the extreme amount of materials needed to level. We haven’t gotten there yet at sub-level 40.

Creators: Farming and Cooking effectively Create their materials. One could literally self-sustain as a craft-leveler (actually, see Towynia below). My hobbit quadruplets all took up Farming, which was really the first endeavor Team Dana had at farming. Fortunately for the Scholar, one of the three crafts a Scholar knows is also Farming. With all these farmers farming so much, we were soon replete with Dye materials from flower and berry farms, which are used by the Scholar to make new dyes. 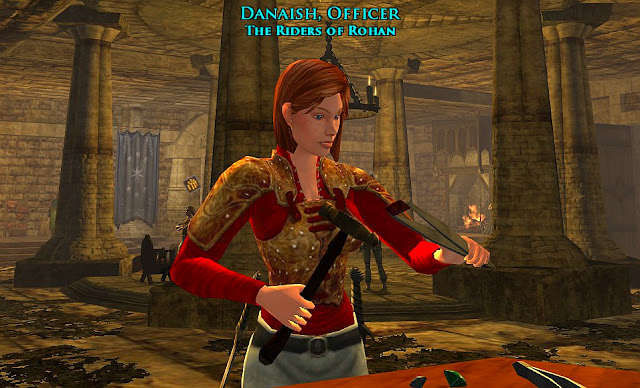 Eastemnet Processing: While the crafting team has not run out of materials yet, they have progressed very well over the past month. The metalsmith, weaponsmith, and woodworker use the Eastemnet “Processing” feature a lot. (The tailor also has this feature, but I, Danania, am the Team tailor). It turns the worked material (ingot, plank, leather) into shavings and then back to worked material. There is some loss in the Processing, but at 175 XP per craft hit each way, it is not that hard to rack up a lot of XP with a team that is focused toward the task!

A very cursory look at Processing indicated that I could get about 45,000 XP out of one stack of 100 Riddermark ore. I didn't bother to calculate the decay function, with the %crit, and the XP gain, but I think that is a good guess. At level 40, it takes 98k XP to level, and at level 50, it takes 188k XP. At some point, it might just become too expensive to level a consuming crafter who doesn't go adventuring.

Universal Toolkit: Ah-ha! A lotro store item I bought that looks like it was designed for me is the “Universal Toolkit”. The cost is 150 TP. A look at it reveals the subtle reasons why I would buy it. The item can do as well as any crafter tool except the new Eastemnet tools for level 80+.

What makes it better than the crafted tools that my metalsmith could make? It is usable at any level. So, the crafter no longer has to think about what “tier” tools to advance toward; she already has the best tools below level 80, even though she might be only level 1. 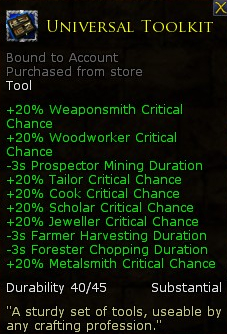 The Toolkit was an easy decision for me and one of the best 150 TP purchases I have made.

Towynia, Farmer Girl of Landroval: Oh my… I was amused by the lildanas’ progress in crafting, but then I was floored to meet Towynia, a Cook in the Prancing Pony of Landroval. She has never carried a weapon or killed anything. She bypassed the Intro and found her calling as a Farmer and a Cook. Though she started at the first of the year, she is now level 38, having only ever farmed and cooked. She tells me that she is self-sufficient and the funds she makes as a farmer and a cook fuel her growth. Since it is a Creating Craft (versus Consuming), I have no doubt that she can slowly make enough coin, though if you see her in the Prancing Pony, don’t forget to tip your waitress; they work hard for the betterment of Middle Earth! 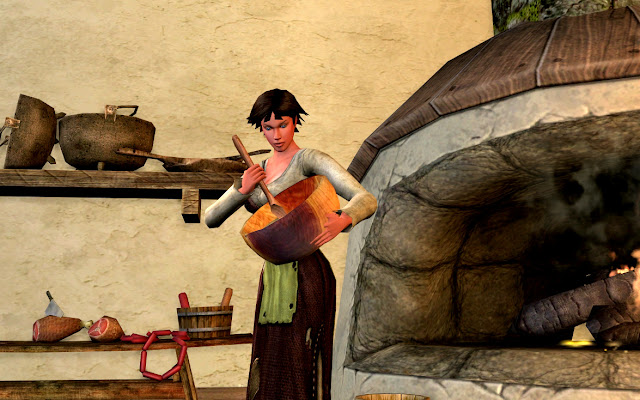 Farmer Girl’s BIO: “Losing her family as a child, Towynia grew up in Dale under various foster care.  As a teenager, she spent most days scrounging for food, cooking for travelers, and pan-handling.

After continuous abuse by her foster family, she decided to run away, starting anew in another distant land.  She dreamed of a normal, quiet life, but ran out of food and coin upon stepping into Bree.

Forced again to beg for a living, she tried scraping by in the back alleys of Bree-town.  Falling again into the wrong crowd, she was forced into service by folk of some rather shady nature and character.

Although waiting on them daily is hard, she continues looking for a way out or a kind and gentle benefactor, as she saves what little coins she makes to continue on her journey.” 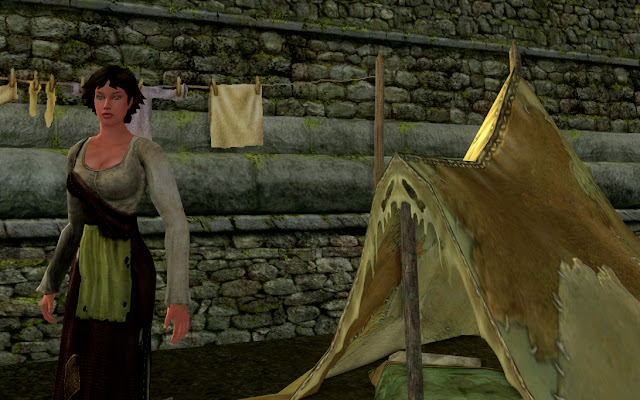 Dye table: For fun, here is a copy of the table my farmers and scholar are using to know what farming supports what dyes. If it helps you, enjoy. (With all pictures on the site, click it to see a larger version.) Some of the information is abbreviated focusing on what I needed, so if you need more detail, http://lotro-wiki.com/index.php/Dyes is always a great source. 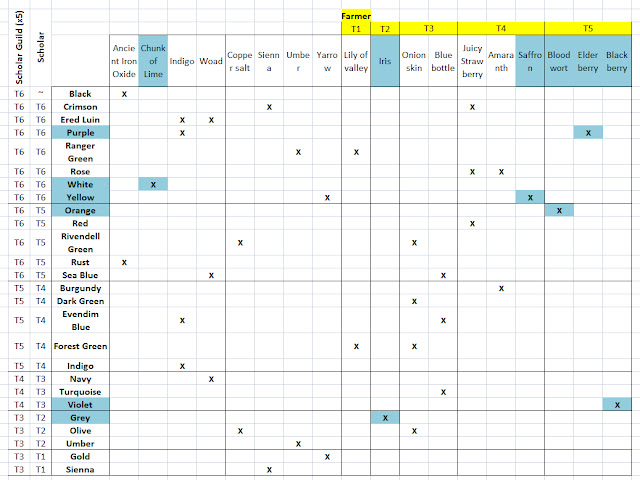 Great blog! Thank you for posting it. You have inspired me to invest some time in crafting my little alts, especially my farmer.

Thank you for confirming i'm not the only one doing this :)

My little Hobbit gal Dacey has dabbled a bit with adventuring. But prefers to while away her days at the forge.

I'm guessing you don't have a farmer who is Kindred with the Men of Dunland? They sell a flower recipe which is awesome for dyes - it produces 10 of the grown items, with around 5 per field (depending on crit rate).

Aye, I have seen Towynia, and her pot pies are outstanding! I always give her extra coins when I can as she works very hard in the fields and the kitchen.

Martin! Thanks for the comment and glad you are inspired. I have always enjoyed lotro crafting and now it feels like these crafters have a renewed purpose. :)

Ian! ...and thank you for confirming that *I* am not the only one who enjoys this. Sometimes it seems that I am out in the field alone; good to know that I am not.

Thank you for the great link! You are correct in that my farmers are not advanced enough to be kindred with the Men of Dunland. It is a good reminder that there are further opportunities on the horizon for my crafters, though they will have to actually leave the craft hall to do something as noble as becoming kindred on Dunland. :)

I'm sure some visitors will key in on your WildFlower link.

Tomrica! I am sure your tips to the Cook are appreciated. :) Hers is an interesting story and I will try to check in with her from time to time to check status.

Hi Danania - thanks for this very inspiring post. I was all crafted out after little level 15 Apeljack progressed as both a farmer and cook from Apprentice to Westfold and Grand Master in the Cooks Guild. I think we may see him in the fields and by the oven again now he can level while he farms and cooks.

Yay for Apeljack! It is a different kind of game, bypassing the adventure to develop the crafter-focused character. I enjoy it. Come along, we shall farm away!

Alas, it appears that U10 will lower crafting experience. Hopefully, not by too much...

That is exactly what I was thinking Tomrica. Depending on the change, that may have sealed the leveling fate of some of these crafters. :)