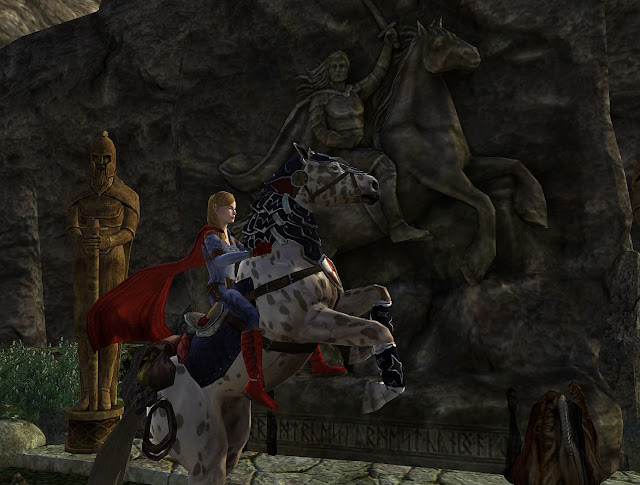 Eorl’s Hallow is a memorial in Rohan that I really enjoyed visiting that I could have very easily overlooked.

Fortunately, the deed “Runes, Tombs, and Monuments of the Eastemnet” required me to find it. The deed gives the typical goodies and the title “Seeker of Rohan’s Ruins”. More than that though, Eorl’s Hallow is just beautiful and worth the trip. Eorl’s Hallow is located at 45.6S, 51.2W., south of Harwick in the Wold.

Reading directly from the travelogue brochures…

The lorebook says that Eorl was the founding King of Rohan.
http://lorebook.lotro.com/wiki/Lore:Eorl
“The son of Léod of the Éothéod, and founder of Rohan. When Gondor was assailed beyond hope, they sent north to Eorl for aid, and he came south in force to rout the enemies of the South-kingdom. As reward, Steward Cirion granted him and his people the land of Calenardhon to dwell in.”

And from Lotro-wiki…
http://lotro-wiki.com/index.php/Eorl's_Hallow
“Eorl's Hallow, also referred to as "Memorial of Eorl" on the map of The Wold [45.6S, 51.2W] This memorial was erected on the site where he fell in battle.”

The author at lotro wiki wrote an awesome travel guide about Eorl’s Hallow. Had I not just been there, I would have felt like I had from the author’s writing. It is packed like a mini-biography with information I did not know about Eorl.

Here is the skyview. Two guards stand watch over the memorial. They allowed me to enter and learn more. 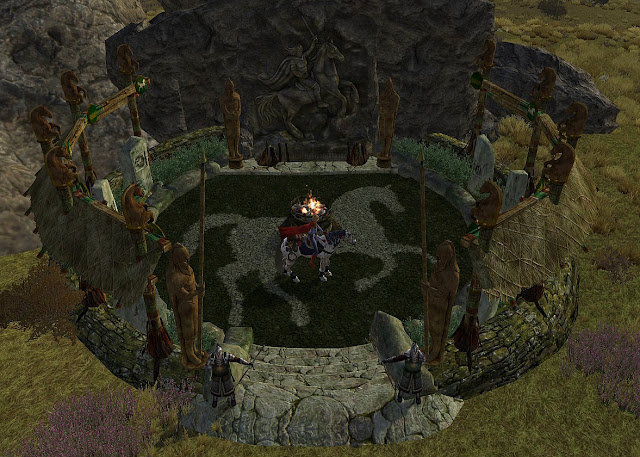 This is a shot of some of the stone carvings depicting Eorl’s life. 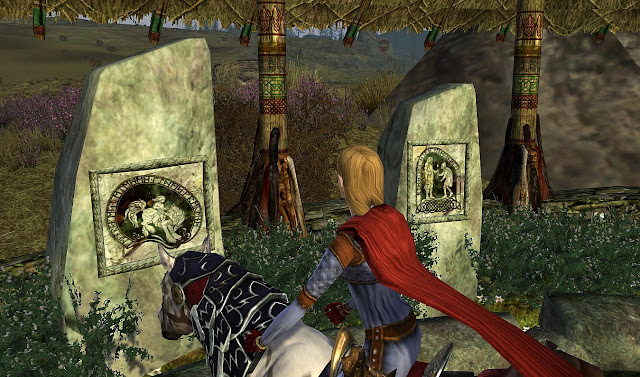 I often see the world through numbers and optimized strategy and sometimes I miss the artistic side. After seeing the monument, I had to investigate further and enjoyed learning about him.


UPDATE: I was alerted to a most excellently done video that I wanted to make sure you got to see.
The Ride of Eorl. "Based on a poem by Cennwyn (Landroval server), BBB brings you The Ride of Eorl. Featuring a cast of thousands. Well, lots anyway. More than three."

It is a beautifully done video starring lotro characters; it is not to be missed. Follow the link.
Posted by Unknown at 10:22 AM

A very nice video of a poem written and performed by the Lonely Mountain Band - depicting the Ride of the Eorl : http://www.youtube.com/watch?v=OFXIv91UQGs

Oooh Tomrica; that is nice! Thanks for the link to the video made by the BBB of Landroval. That is the tops! I'm going to update this post and include a link above also.

I had completely missed this when questing, so had to go find it for the deed. I'm glad they put that deed in as it's a great place! I always love attention to detail like this. :)

Hehe, Lothirieth. I was the same; I probably circled the monument a dozen times without realizing it was there. :D

Ooh, I really must go see this amazing landmark!