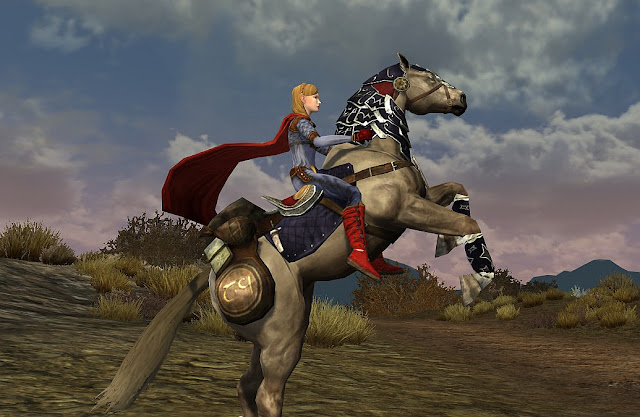 Woohoo! Ok, as you know, I normally lean heavily on the numbers and data side of lotro, but seeing some of the options for the Warsteed cosmetics just knocked me right out of my boots!

A friend told me that with the number of steeds I have in the Steed Gallery (All the Steeds), I would probably be able to put together some good looks. However, some of the pre-release pictures made the warsteed look “clunky” so I was skeptical.

Seeing the warsteed dressed for the first time though… wow! It reminds me of the time I went from an old laptop to my “horsey” desktop… so beautiful. I am so excited!

So, from the Steed Gallery (try this page to see all of these special horses as they normally appear… All-the-Steeds/store-steeds), here is a list of the skins that can be used.
Update: For comparison purposes, I put all of the Warsteeds into the same "All-the-Steeds" page as the original Steeds so you can see them side-by-side.

Additionally, the Legendary pre-order (riders-of-rohan-pre-order-horsing-around) came with a steed cosmetic set. The legendary pre-order will have placed a box in your inventory after Rohan is patched (open the box, right click on the contents that pop out… there will be leggings, a tail, a saddle, a caparison, & a halter).


There are others cosmetics that can be (1) bought from the store, (2) obtained from quests, and (3) won as random warband loot. A Simple Black Saddle and a Simple Tail come standard with the warsteed. 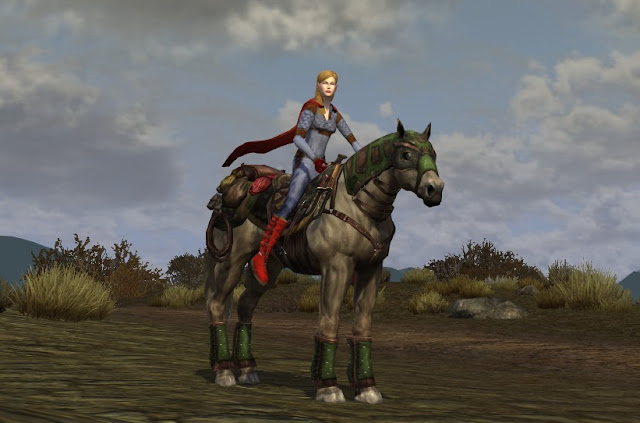 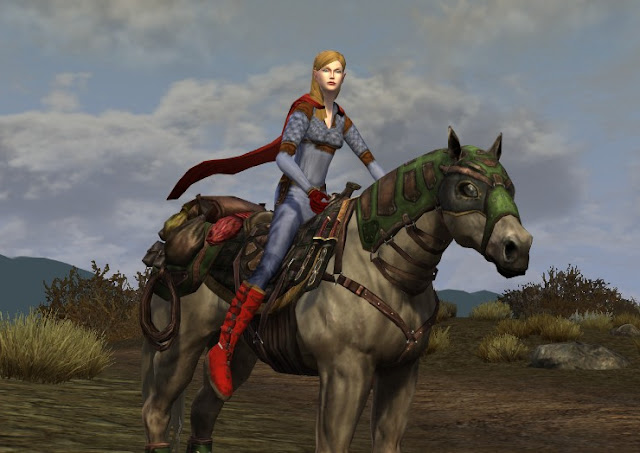 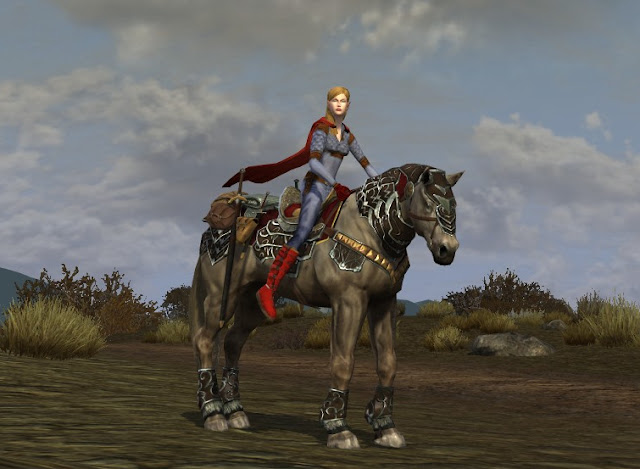 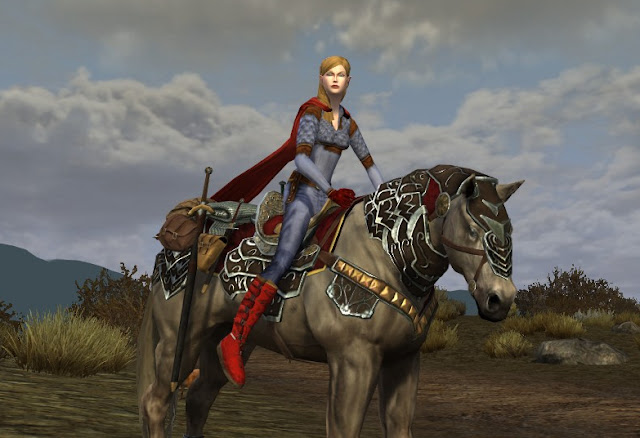 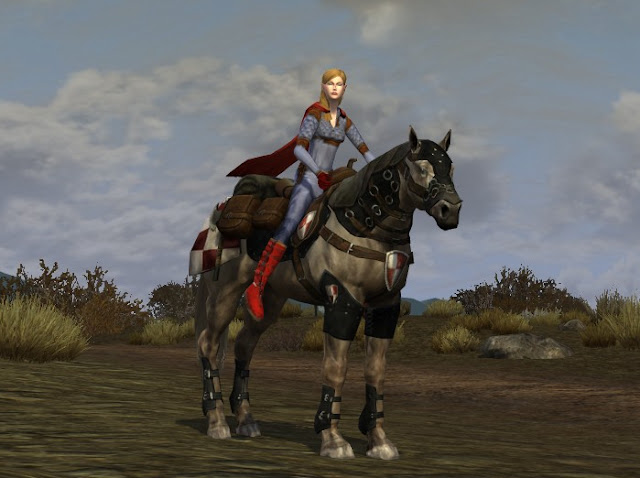 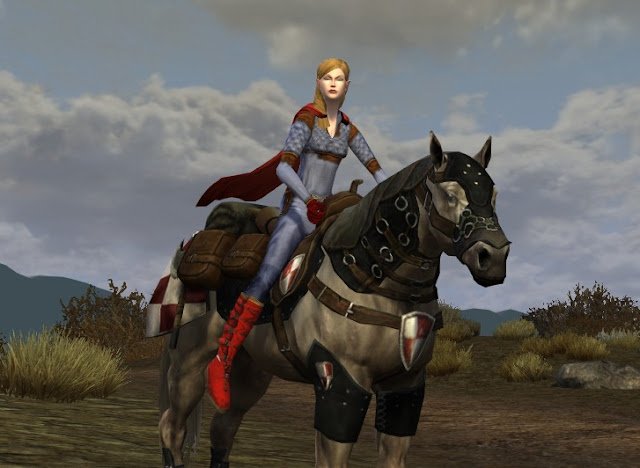 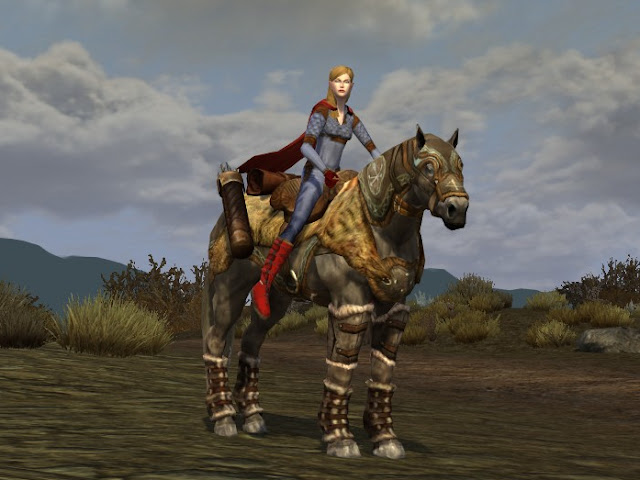 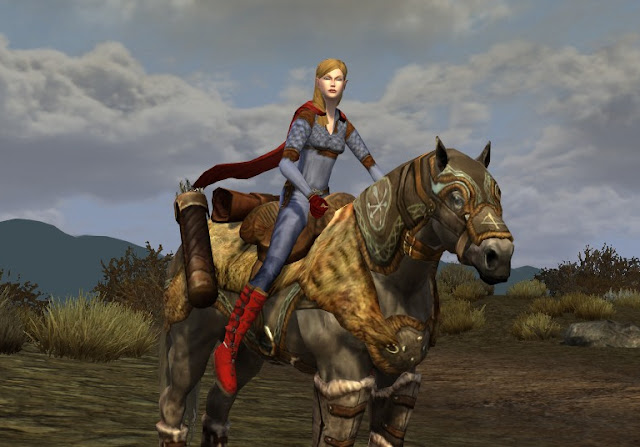 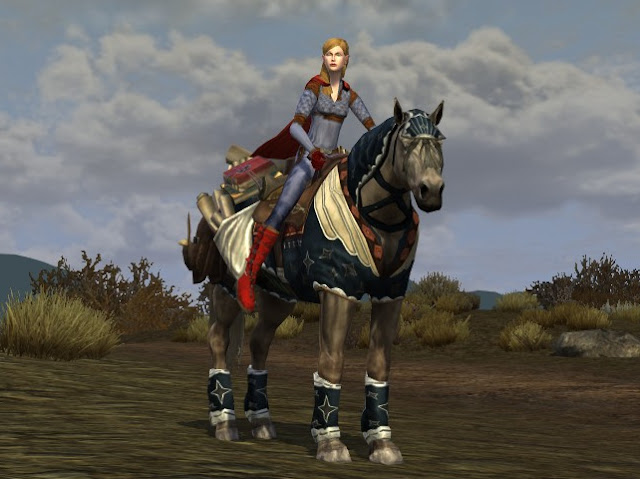 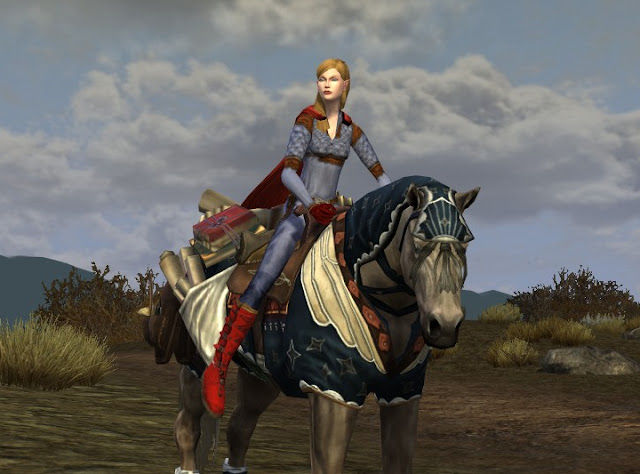 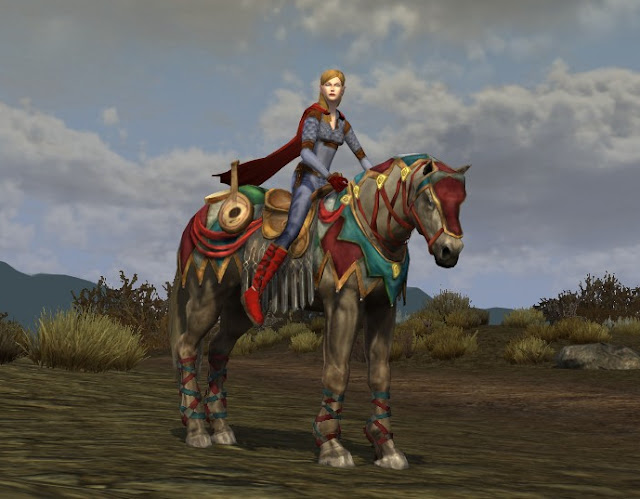 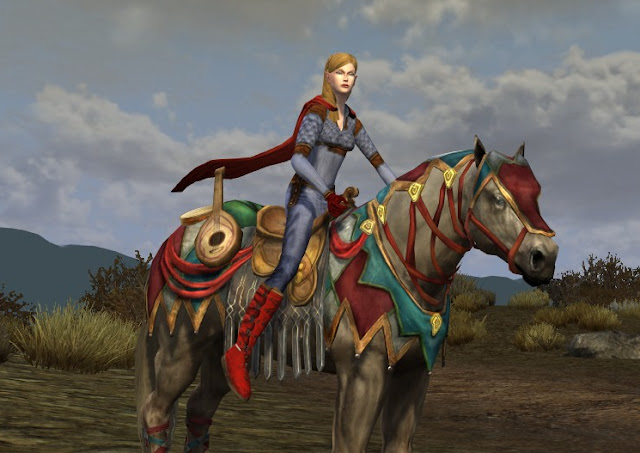 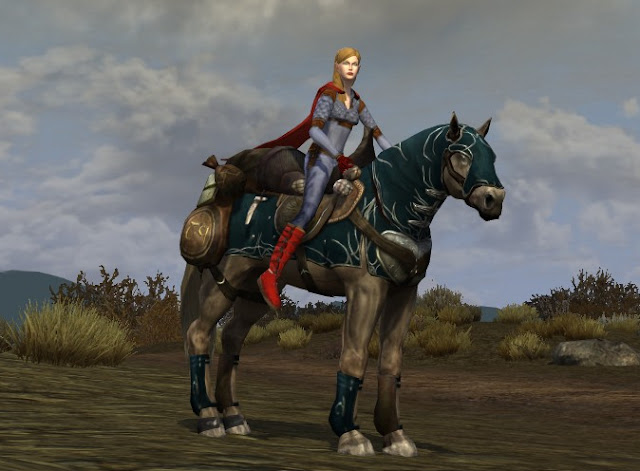 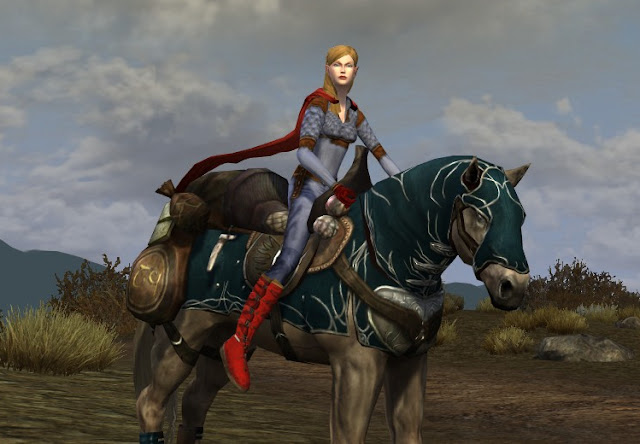 All Night parts, simple tail, default hide, all default colors. I like this one much better without his normal dark coloring (of course, I like the Steed of Bright Days so YMMV). 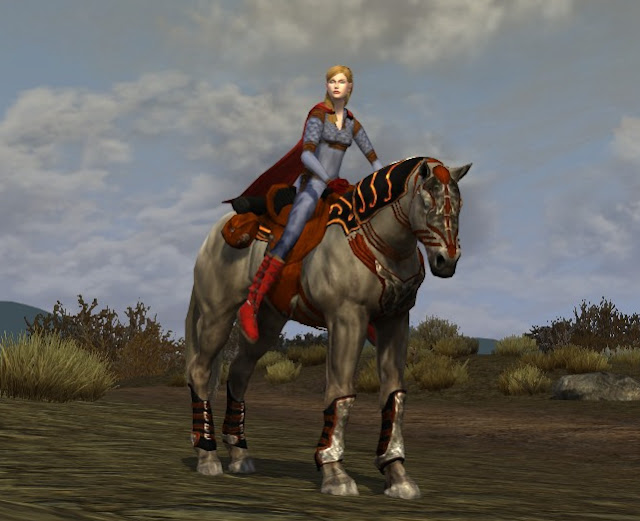 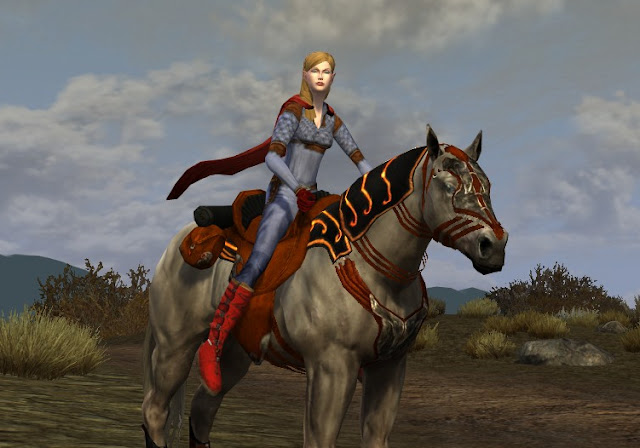 WarSteed of the Rohirrim Elite 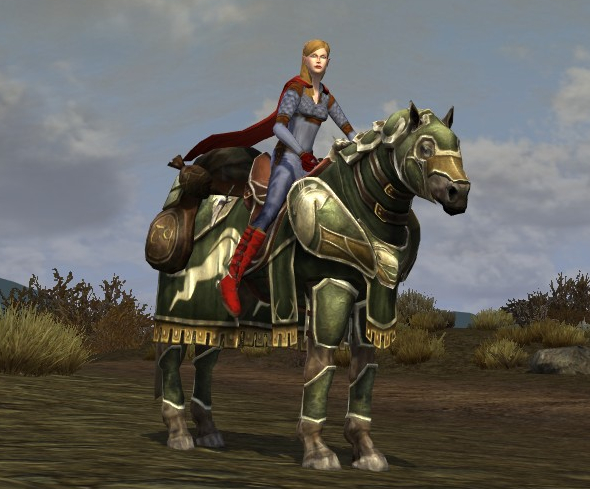 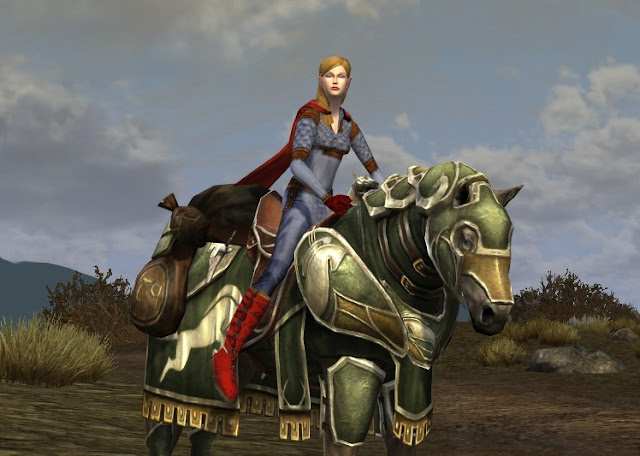 Light Caparison and Light Leggings from quests. I matched it here with Hunter’s Halter, Saddle, and Gear, with default Simple Tail, default Solid Warsteed hide. There are more pieces from the quests; I just haven’t gotten to them yet. I assume the other "light set" pieces look similar to the Caparison. 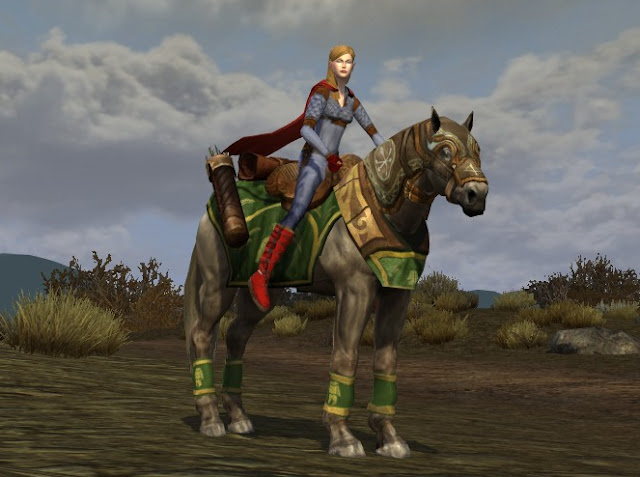 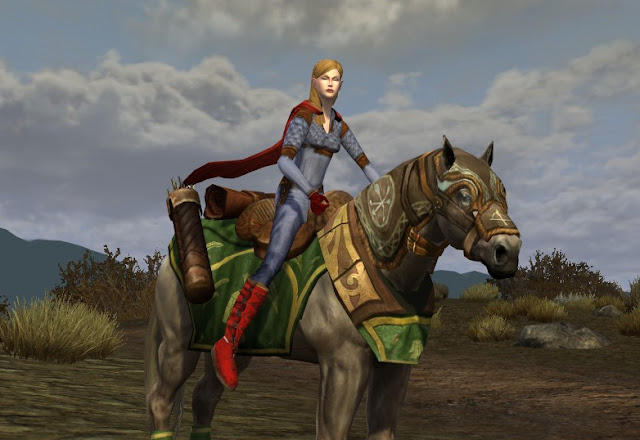 You get 4 colors in each set, and they are usable forever. However, all but the basic colors are locked. I read that dyes can be found in-game, and they can definitely be purchased through the store. I initially thought about getting some dye sets, but Holy moly, they are expensive even for this horse collector! At 595 TP for each set, you could buy ALL 11 of the dye sets for only 6545 TP.

Those might have to go on my “Santa” list. (195 TP each is probably where I would put my buy-trigger so I will be looking for a 65% off sale. My take with any purchase is that if you don't like the price, don't buy it. The market will correct if enough buyers have a similar market view versus what profits the seller is trying to make.) 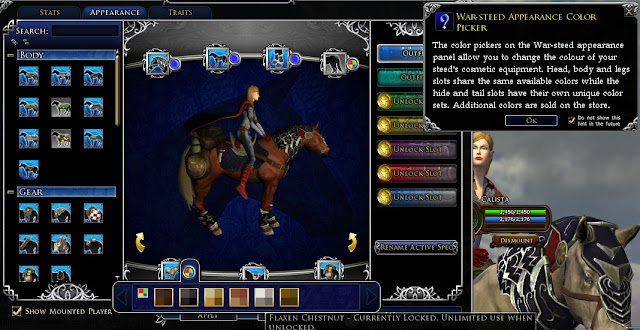 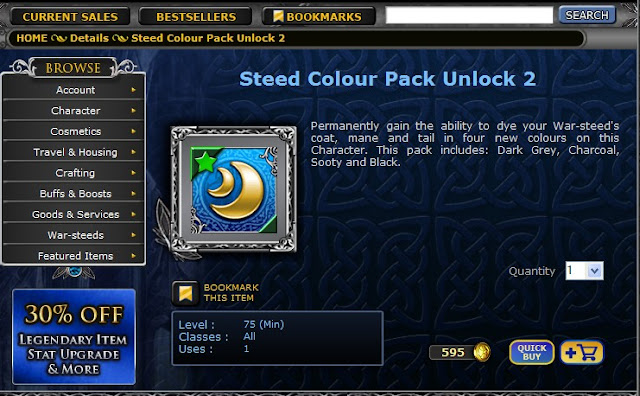 Here is what I came up with for my first Warsteed! Did I mention I am excited about it!?

I actually like the Burglar Gear much better and replaced my RK Gear for the next shots during the pink storm and sunset. 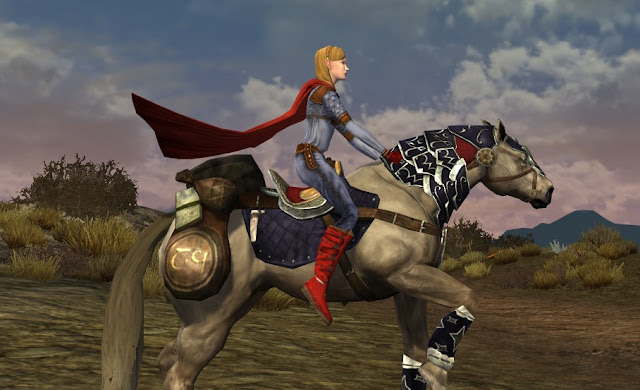 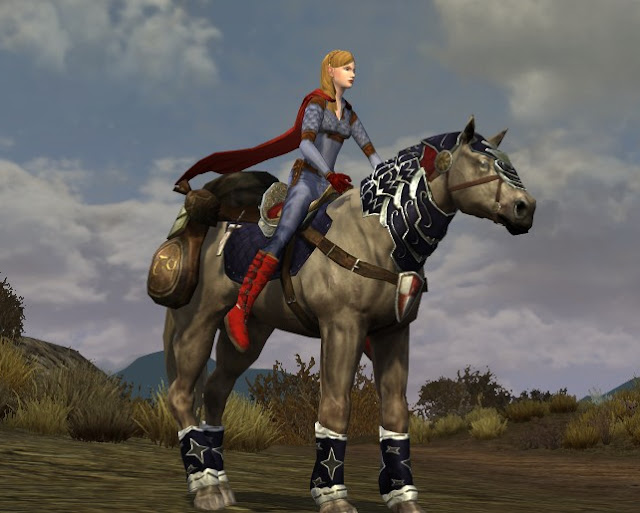 The coolest thing I have gotten is a “Spotted Hide” Cosmetic that I won from a “Blue Box of Wold Spoils”. I got the box from turning in a quest after killing a Warband in The Wold near Harwick. I doubt that it matters, but the warband was named Cinder. Also, I have been wearing my Erebrandir’s Horseshoe since I left the Great River just in case, but I have no idea if it helps. I won nothing of interest from the other boxes I have gotten thusfar, but am optimistic that more awesomeness exists as I see painted horses roaming the land. This shot was taken when the sky turned pink during a storm. 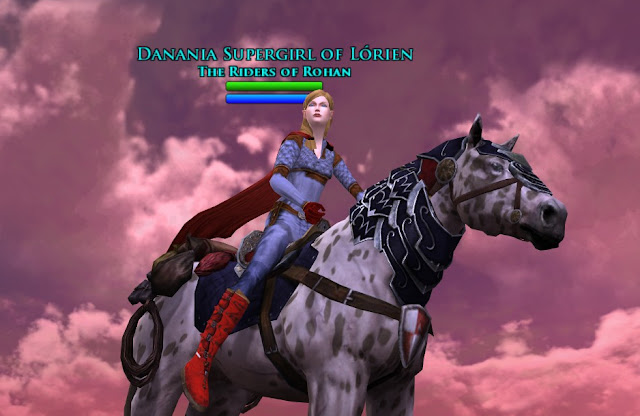 Orc head on a Pike

My friend Dirtdiver who was with me at the time also won an “Orc head on a Pike” from his Blue Box. It made me /heave when I saw it. It is a nasty oozing head with flies buzzing around it (you can make out the flies if you look closely in the picture). That cosmetic probably rocks for a studly warden, but I think I got the better of the loot with the Spotted Hide. J If you are taking notes, Dirtdiver was NOT carrying Erebrandir’s Horseshoe. 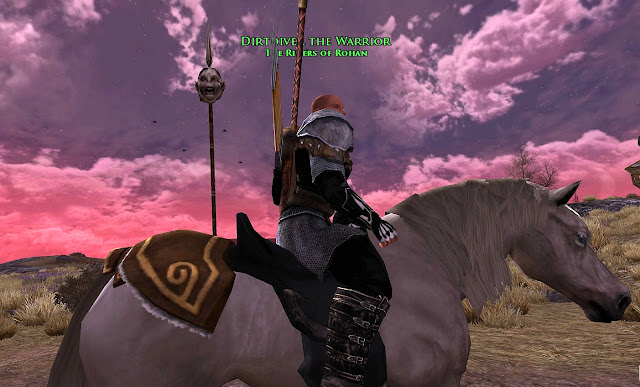 Thanks for coming to danania.net and seeing a few warsteeds! I look forward to seeing you again. Next week, I will bring you more cool things from Rohan! For now, let’s watch the sunset fade over The Wold. 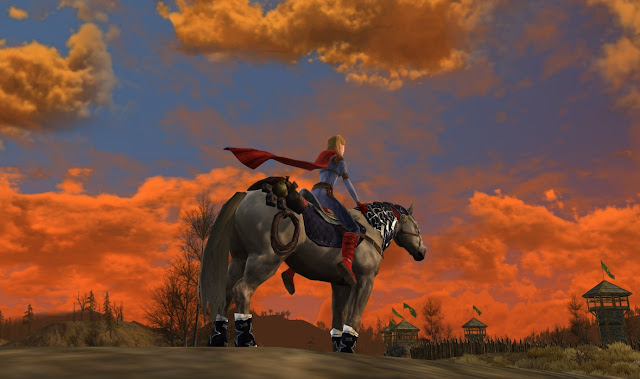 If you were so inclined, you could go add your voice to those protesting the ridiculous dye costs (oh how I could go on a rant about these :P):

:D Of course, protesting and boycotting are ways to get a business's attention also... thanks Lothirieth.

thanks for posting the screenshots, great to see them :)

I'm looking forward to customising my mount beyond the default/game obtained items IF the prices come down ;)

For sure, I am very satisfied to wait and see what happens before making any warsteed cosmetic purchases (...well, I mean other than buying all the Steeds, but I bought those anyway. hehe)

They really did a good job on those warsteeds! Much more than I was expecting to be honest. But then again I have been trying to be pessimistic and cynical towards anything game-related for a few years now. Best way to deal with hype-backlash, I found out.

Anyhoo, I like the first screenshot of "Supergirl's First Warsteed". There is just something on that pose that makes it look like that horse is about to fly. Or run really fast which is close enough I guess. ;)

Lol Rakuno!
I love the plan... set the bar low and dare someone to fail to hurdle it. :D

Hehe. The horse was strutting his stuff. I think flying is further down the skill tree somewhere; I'm still learning...

Thanks for the smiles!

Wowie, great job on posting these pics. Definitely make me wish I had more TP and was willing to spend them on store horsies. Still, I'll make do with the quest/etc cosmetic options, and just hope with the rest of us that dye prices go down a bit. Cheers!

Thanks so much Zyngor! Here's hoping luck will go your way and additional warsteed cosmetics fall into your lap. :D

Hi there!
This is post is certainly enlightening and helpful. Thank you. :)

I found your post via CasualStrollToMordor's twitter, and was wondering if you could either post Steed vs. War-steed (with default colours) pictures, or allow me to do so, in a thread in the forums (http://forums.lotro.com/showthread.php?484634-From-Steed-to-War-steed)?
In addition to how to get the war-steed to match the premium steeds, what it'd cost?

You are welcome to borrow my pictures for repost to the lotro forum, but please include page links back to where you obtained them.

I am interested to see what your verdict is on steed-to-warsteed. :D
Ride on!

If you want to take a look at how I accredited you, or give your opinion, visit the thread. The pictures are hosted on my flickr-account, but link to your blog. I hope that's okay. :)

Welcome. For the benefit of those who are trying to compare, I moved all the Warsteeds into the "All the Steeds" section of danania.net next to their matching counterparts.

*Gasp* I want that "Orc head on a Pike" soooo bad! LoL, my kinnies would get a real kick out of it. Too cool!

Lol! Dirtdiver warmed up to it also and loves it. Of course, he had to sling off some of the /heave. The maggoty infested smell got to me and I lost my lembas on his new "trophy".

Check out MacsWife - The War Mini is also rocking her solo warband reward... :)

Rumor on the wind is that MW WarMini piked an orc head. I will have to give her a special /heavy when I see her.

Hey Danania! Thanks for the thorough post! My main character is up to L69, and I am eagerly anticipating the war steed, but sad to read about how spendy it is to customize them. Of course, since I don't have one yet I can't check to see if the pricing has changed since you wrote this post- any update?
Thanks!
~Saeberun

Hi Anne and welcome!
Since this article was written, there have been many many customizable options for warsteeds as seen throughout this blog (look toward some of the more recent posts). I think the color packs are about the same, in the 495 or 595 range, but there are plenty of sales and coupons to get the color packs cheaper. There are also many free ways to customize your warsteed. One of the more popular free ways is to visit the seasonal festivals. Warsteed cosmetics are a given now that all festivals will barter for the latest festival warsteed cosmetic. Also, there are a few cosmetics that are given by Rohan quests and a few more that are random drop for Rohan warbands. Always feel free to check back here at www.danania.net to see what's new in the world of lotro horses. ;) I try to keep up-to-date.