Steed of the Hammerhand and Helm's Deep


I was asked recently what I have been doing to prepare for Helm's Deep. o.o Umm... I move inventory around and... I bought Helm's Deep. :D That's about it. It will be a brave new world when I log on to see it what is new next week.


Here is a picture of the preorder stuff. 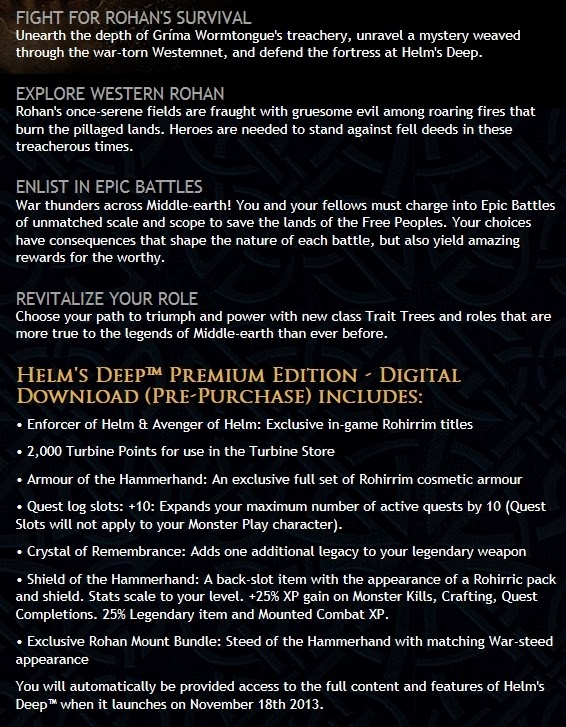 I like the goodies fine enough and am of course, pro horse. The crystal of remembrance will be nice to have. The +25% XP does nothing for me but the lildanas enjoyed having it when craft leveling. I will mention how they are doing with their craft experience later (Crafting-to-mordor-part-2).

Here is a look at the Horsie...

Steed of the Hammerhand:
It is a fine horse Lots of plate and chain metal, carries one sword on the right side and saddle bags on both sides. His halter has a little horse on the top of his head. I got a chuckle out of having a horse with a horse hood ornament. :D It is easier to see the hood ornament in the first picture.

Warsteed of the Hammerhand:
The Default is all there is. None of these pieces can be dyed. You either like it or you don't. :)
It is exactly the same as the steed.


I hope you have a great time with Helm's Deep. :)

"It will be a brave new world when I log on to see it what is new next week." Right there with you on that sentiment!

Lol! JD, It might have been betterer had I not had the word inversion typo in that quote. :D

I did do one extra thing last night ... bounder tokens will expire and turn into marks on HD launch, so I got whatever I wanted from the Bounders and used up some tokens.

Wow, I totally missed that the Steed of the Hammerhand has a horse hood ornament. XD

I think that's because I don't really use it that much. My Warden does, but I haven't been playing her recently. My Captain just took the saddlebags and put them on her Steed of the Captain; it's a pretty nice match, and IMO better than the random helmet that the Captain steed comes with.

Lead us on, Danania! We are going to Helm's Deep. I can't wait to learn your wise counsel and advice.
Wrynne

Just a heads up, both the Eorlingas and Helmingas factions in Western Rohan have reputation steeds! 2 more for your collection :)

Yay Wrynne! I am soaking up new quests slowly. The traiting and skills are a bit different which changes skill timing, but overall I just traited all yellow and roaming just fine. I'll talk more about it soon. :)

He they Alaeara!
I did notice the two new horses and just earned the first last night. Thanks much for the heads up as they are fairly well hidden. ;) I'll post them and get them in the Gallery soon.

At the moment I am using a lightening build with a small dash of other delights from heal and fire. I am doing this because my stone and legacies are lightening focused. I plan to experiment when I get to 95 and can forge a new stone of fire. Meanwhile, the lightening build is serving me very well.

Thanks for the heads-up on the Warsteed appearances for Eorlingas and Helmingas dropping from warband boxes. I did not know that. I assume I will not get them since they are random acquire... but we shall see!

Digger,
Yep. I really need to do a post on my traiting and build... the short version is that I am stacked heavily in Lightning and spend my spare points in stat upgrades from blue and red lines. The lightning skill set is solid enough that a dabble of either healing or fire would do little but +will helps all the time. More discussion on that to come! :D