I got to visit some Isengard Raids this past month. Overall, the teams I was with had three wins out of four runs. That seems fairly good. J Thankfully, there were many people there who knew more than I do and told me what to do and what not to do. My friend Mac took it as a personal mission to get me and others through parts of Isengard to allow us to barter for better armors. I am very grateful to know people who know more than I do, of which there were many in the various raids.

There are 5 parts to the Isengard Raid. The first three are the Acid wing, the Lightning wing, and the Fire and Frost wing. The fourth is the Shadow wing and the final is a showdown with Saruman. I was fortunate enough to see the first three. Here are a few of my pictures of my vacation to Isengard. 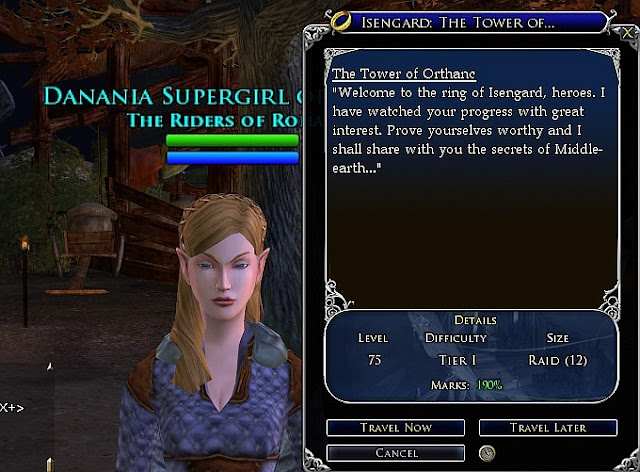 As with much of the “trash” in the wings, we saw a lot of death before getting to the bosses. J 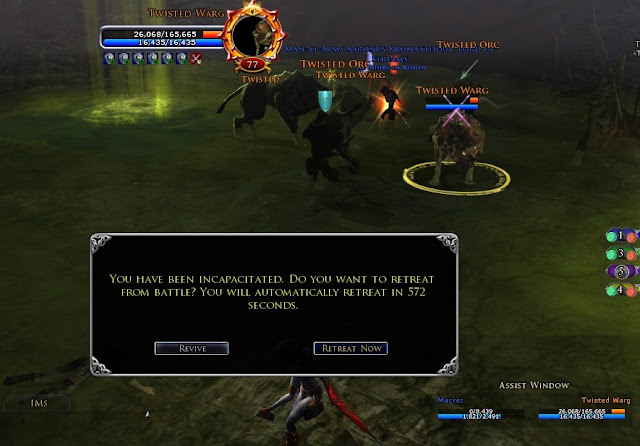 What I learned about the Acid wing… Jump. A lot. If you stop in the acid, you die. 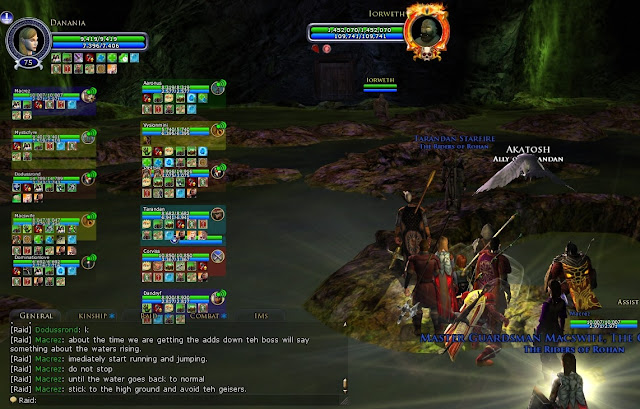 Perhaps it was good fortune, but this wing seemed easier than the others. Just don’t stop jumping while the Acid is rising. 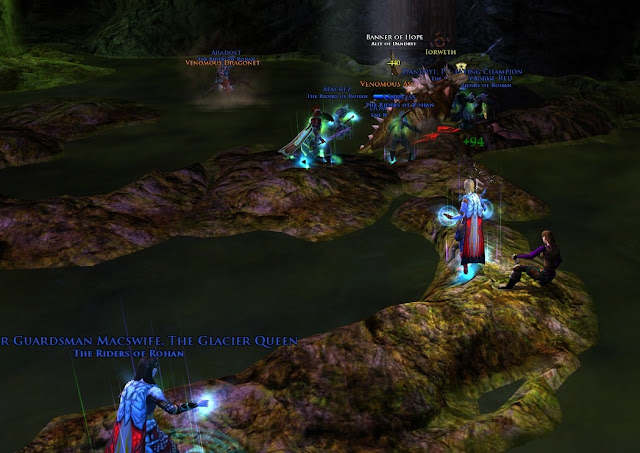 New night… “where are we going tonight Mac?” 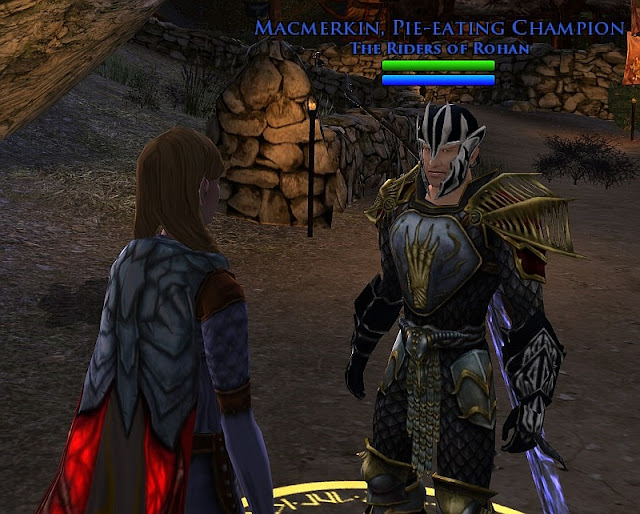 We marched in through the trash fight. Good leadership and teamwork. No problems here. 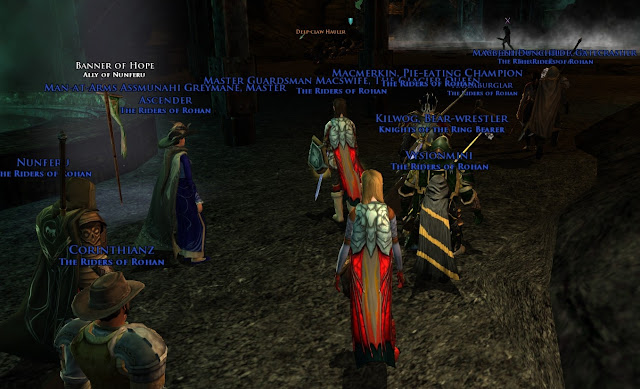 So, the boss… The beautiful chains of lightning mean that something is not working as well for our team of heroes. It certainly is pretty though as some deadly things can be.  It was not meant to be as the hour drew late and Saruman’s forces won the night. 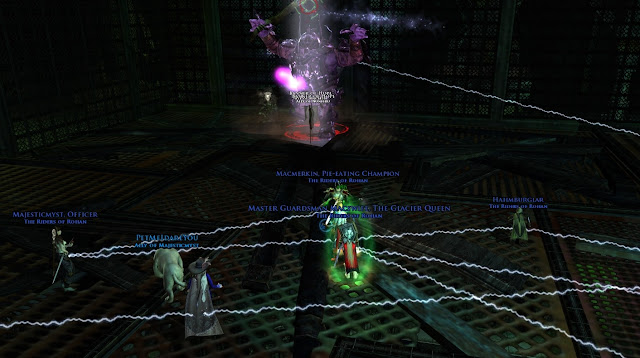 Best stick together just in case. 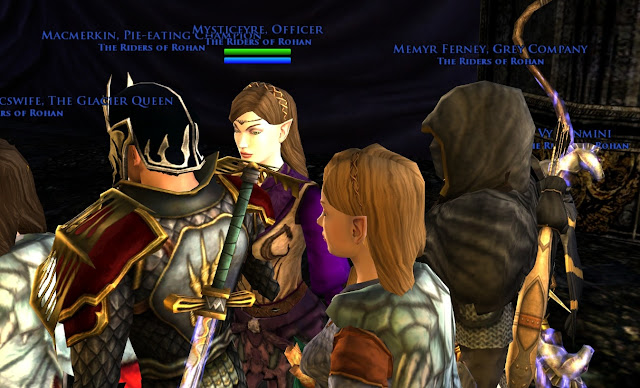 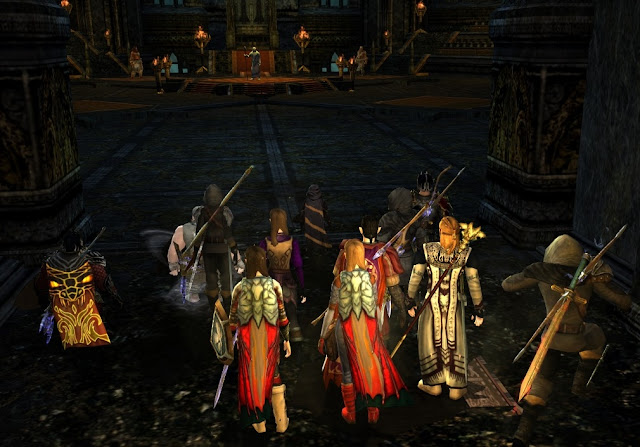 Alrighty! Two giants - something about “Fire” and “Frost”. Now it is our side versus one giant and the other half of the raid on the far side of the room versus the other giant. As long as nothing breaks down and the giants stay contained, it is easy enough. 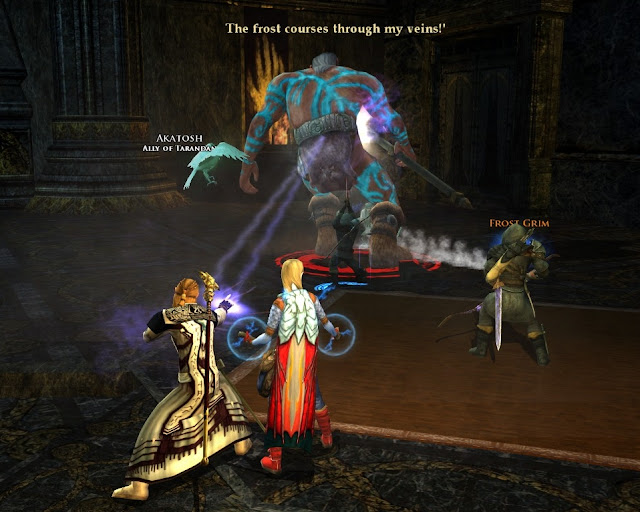 Celebrate with a dance! I really like that chandelier/mobile hanging from the ceiling! 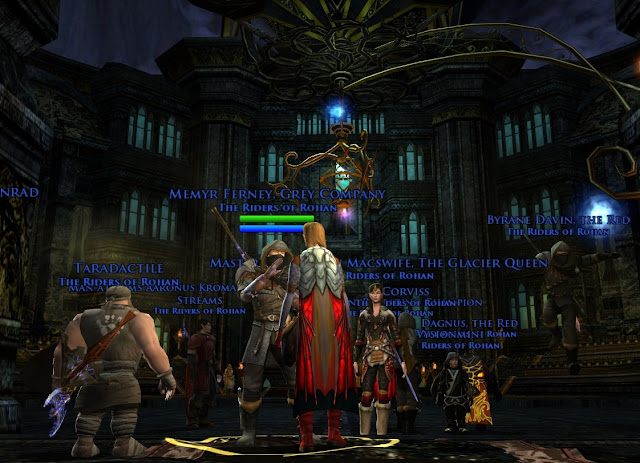 New night. We are going back to the Lightning wing? Woohoo! Hopefully, there will be less lightning-y drama than last time. Here is the entrance to the lightning wing. On we go with Macrez, Taradanag, Tarandan, Dodussrond, Gimmlet, Vysionmini, Mysticfyre, Hahmburglar, Criptek, Dagnus, Memyr. (2 guard, 1 mini, 2 capt, 2 RK, LM, 3 hunters, burg). This time I will be healing, which will be the first time I’ve healed in a group since Update 6 release. 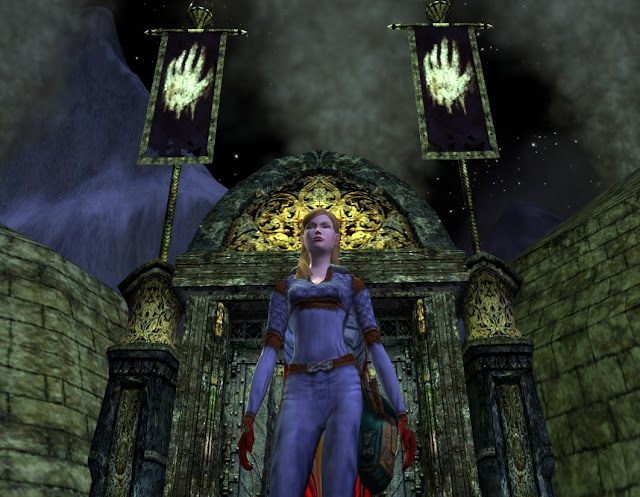 If nothing else, we will bring a shot of color to this very drab Isengard. With the group dressed in bright reds, purples and blues, our stealthy burglar cringes at our lack of subtlety. 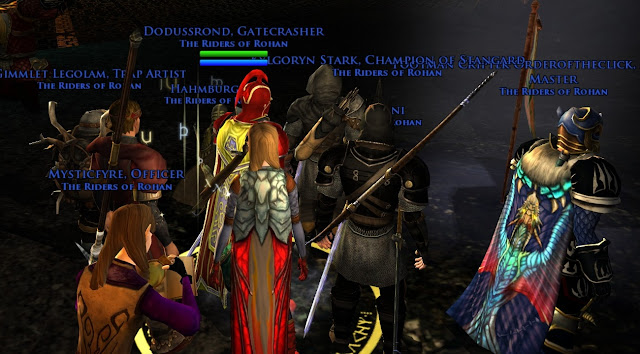 Saruman doesn’t want to waste his time dealing with this group. He walks off, leaving our “imminent demise” to his troll Kalbak. 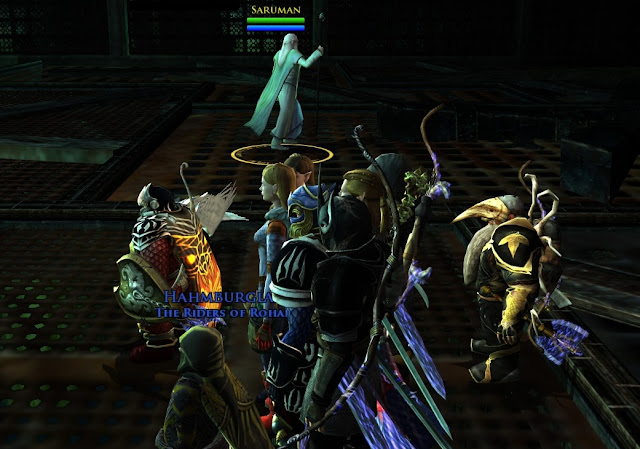 He doesn’t realize that we got much smarterer since last time. One could say that we are “lightning quick”. The pretty lightning is still pretty, but we are going to give it the least effect possible. 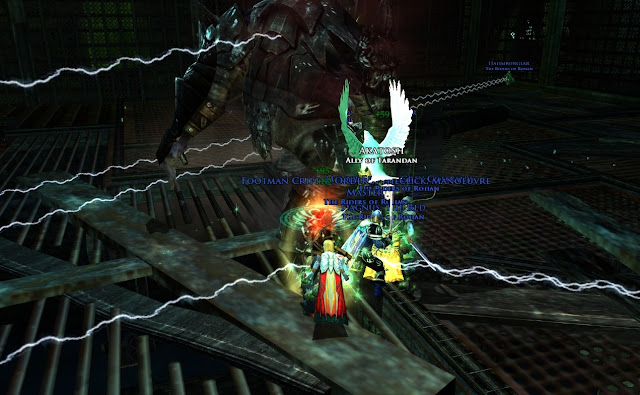 We are in tight formation and shall win the day! “Heal like the wind, Dana!” 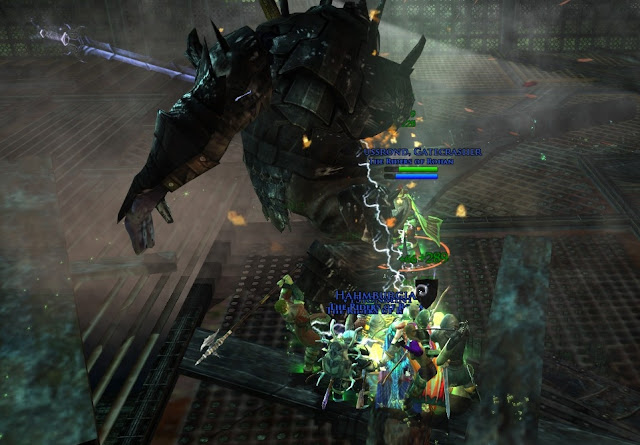 Nice three wings down = three pieces of armor opened. Enough seals obtained via trips to the Foundry and the 3-person Isens gave me just enough for three pieces to be bartered. Color me peachy!

So, I haven’t had a full-on confrontation with Saruman, but MW took me to his place so that we could talk face to face. Here is a shot of MW soloing Saruman. I just came along to watch; I brought popcorn. He is a worthy solo for such an uber War-mini as MW. (kidding J, might need 2 War-minis).

Saruman asked me to stay behind and chat after MW had to step away to save the day elsewhere.

Dana: You have not been playing very nice. Hanging out with trolls is not a good way to make friends.

Saruman: How quickly you forget; you have a history of hanging out with trolls. You and I are much the same. <flashback to the misty mountains....> 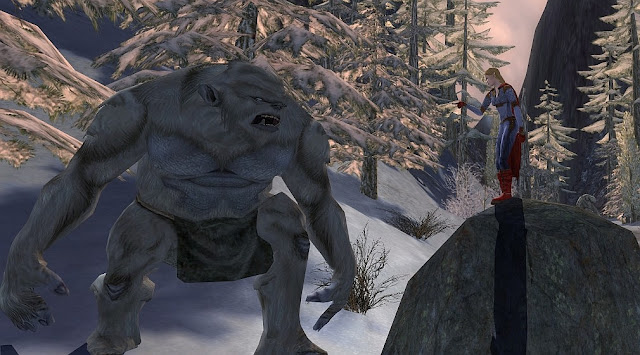 Saruman: Why have you come? I warned you before to discontinue your meddling…
<flashback to the gates of isengard...>

Dana: You haven’t been watching me very closely then. Protecting free Earth is what I do. I am the Supergirl of Lorien. 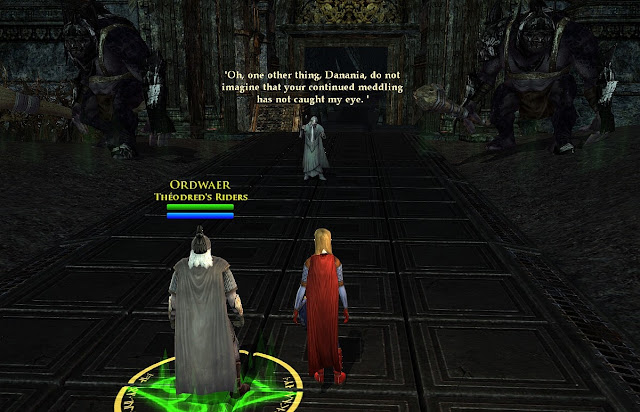 Saruman: Supergirl? You think you can help your friends? You are nothing but a frightened little girl. You are not nearly as smart or as brave as you think you are. Your friends have abandoned you. Look around you. No one cares. You walk alone. 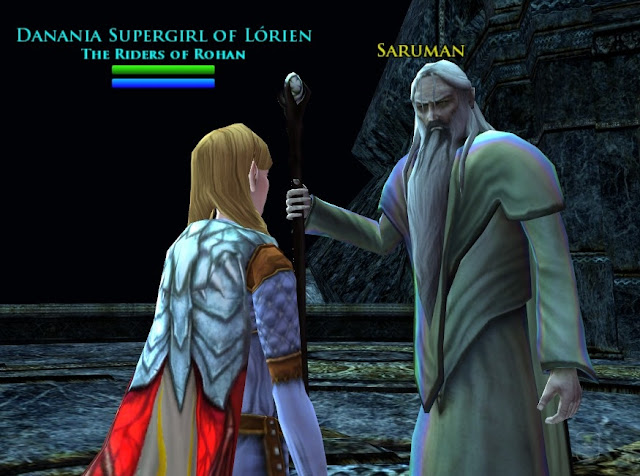 Dana: You underestimate the power of friends. I bet that we will persevere. 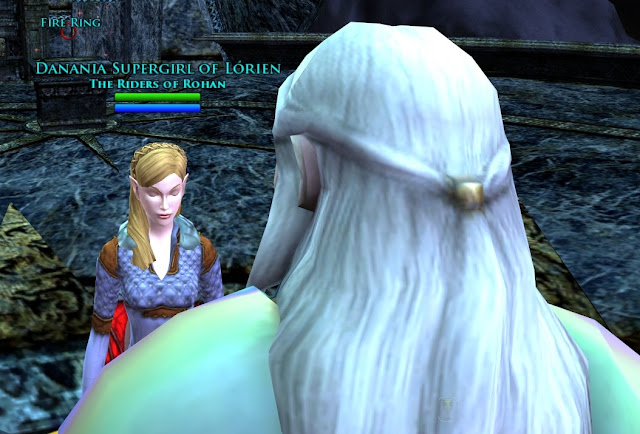 Seriously, you are hilarious.

Yay! Just when I think no one gets my corny humor, MW comes through for me. :D

Woot for fans of Kilwog! :D