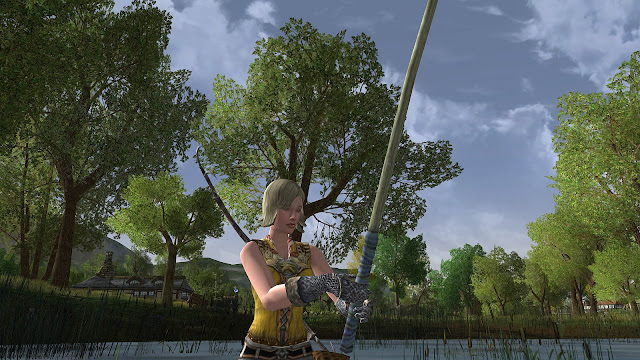 Danadelion got the opportunity to meet a Game Master during the Summer festival. It is always a bit intimidating, it is like talking to the police. I know I didn’t do anything wrong, but they have badges, and uniforms, and guns, and jails. What if he is an evil GM??? O.o

Turns out, he was nothing of the sort. Here is how it went down… told from Delion’s perspective.

"  I had patiently waited for my turn to go to festival. Danania had gone, then Danaszar, then Danaish, and now I was up 4th. The path was clear. I had gone to Summer festival last year, and had already been watching what was happening this year for two days, just waiting. I went to the Party Tree and got my one token from Opal Goodbody to start the festival, did the food fetch-it quest there around the Hill, and the other Hill fetch-it quest, and then over to Bywater to do the fishing gear fetch-it quest around the pond.

Next, I completed “To the Fishing Hole” there in Bywater by talking to Neddie Grubb and pick up the quest to Stock the Pond… wait… where is the next quest, for Stocking the Pond??? 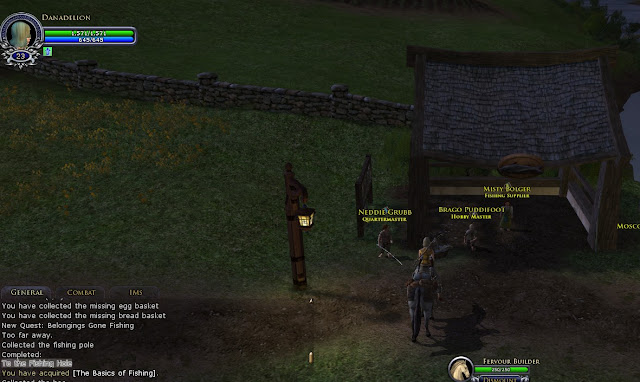 Hey! I am old enough to fish! I am higher than both that goodie child Danaish and that laid back elf Danaszar! Why am I not allowed to Restock the Pond? It’s because I’m a Champion, isn’t it? No respect! /fervour builds../ I know the quest must be here. I did get the “To the Fishing Hole”, it is done. Mebbe both Neddie and I know that he wants me to go to Thorin’s Hall and catch Amberjacks. Ride there... Nada. The Quartermaster just stares at me like he has no idea that Amberjacks might be in Thorin’s Hall. Sigh. Mebbe it is an error in festival communication; something involving the phase of the moon and keg-dwarves on strike. It is time to call on a higher power, he-who-shall-not-be-named. 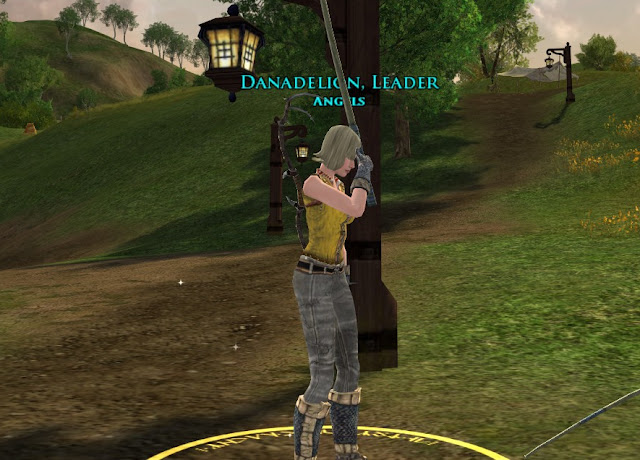 I nervously wait, practicing my ability to dodge if the higher power shows up and decides to smite me for angering the wrath of the great and powerful Oz. A few minutes later, +Jalwis+ contacts me with a very pleasant, Howdy! How very hospitable; Danania, raised in the suthun’ flets, would have been impressed.

After I explained the situation, he asks me to pause, blink out, click my heels three times and see if everything was back to normal. While hopeful, I found that just closing my eyes didn’t help. He explained that the most likely cause is often missing a pre-requisite. I explained that I had done everything the other danas did, exactly as they had done them, the next quest was supposed to be here but it just isn’t. I don’t know what else it could be since I did exactly the same thing.

I fidgeted anxiously some more and rode my steed in circles. Jalwis asked me to stop fidgeting and come stand next to Neddie. Mebbe putting me next to the “accused” would help. So, I stood there, fishing pole in hand, eager to go. Jalwis started off again with “obviously you have the fishing prerequisite”.

I stand there. Stunned. I have a pole. Danaszar crafted it for me. OMG. Fishing Prerequisite. The entire fishing prerequisite is talking to that Hobby Master right next to me and telling him “Yes, I would like to fish”.

Somehow I had been to this many festivals, carrying a pole for years and had never fished. It turns out that last Summer, I bet on hobbit races and earned enough to barter for my festival horse. The next best option for fishing was Farmer’s Faire, but I was picking mushrooms out of a field and earned enough tokens for a horse and never fished. So, in fact, I had NEVER learned to fish.

I sheepishly apologized to Jalwis and thanked him for being so polite and helpful with thinking through the troubleshooting (not mentioning being thankful that he didn’t smite me). He asked if there was anything else I needed? Which there wasn’t (except for the dwarves to get off strike and get back to keg racing, but realized that wasn’t his jurisdiction).

I thanked him one final time and told him he was welcome to drop in at danania.net anytime! Bold. Yeah… I’m smooth like that. Lol. The next message I got from him was the form message “session closed, go and sin no more, live long and prosper, end of line” ...whatever that text was to tell me to stop writing him.

So, from all of the Danas, Jalwis thank you for making Middle Earth a better place! Readers, If you know Jalwis, feel free to pass this link along as I feel confident that someone might know him. J
Posted by Unknown at 6:55 AM

Thanks Tomeoric. :)
I am thankful to be alive to tell the story, smite-free.

That is a great story!

Thanks Nusnogard. :)
If ever we happen to meet another GM, I hope the next one is as nice. The next previous one I recall was when I was in Evendim versus "the turtle" who had bugged out mid-fight (you know, the turtle with the blue lady) so it had been a while.

You're welcome. I was standing there trying everything myself. I palmed my forehead when I realized it was, of course, the simplest thing.
Have fun in Middle Earth! (And with a imagination like that search for a little LARPing to boot.)
+Jalwis+

Yay! Thanks so much for the help +Jalwis+, and definitely for the nice comment! You are welcome at danania.net anytime. :D

...I think this is what it feels like if Justin Bieber were to drop by (well, that is, if Justin was cool enough to be a GM...)

I wonder if I would get to wear my Supergirl suit to LARP...