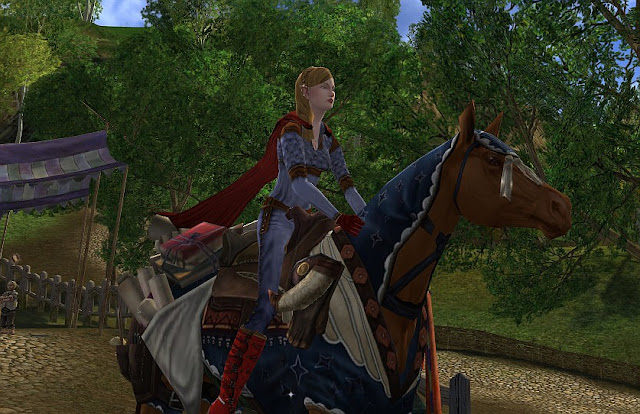 Someone asked me recently if I got the Steed of the Lore-Master. Well, of course. I actually think it is pretty. J  He has a blue outfit that suits me well. 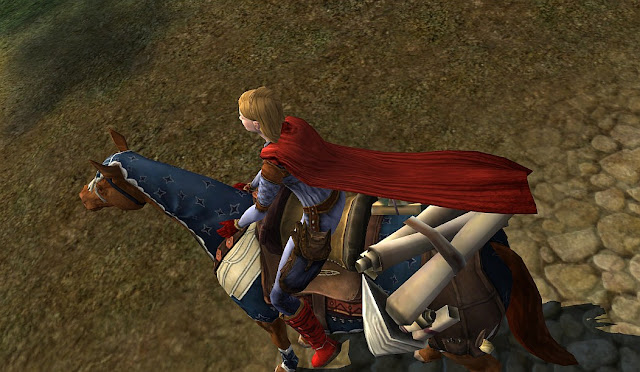 He is a bit magical and has good balance to be able to hold those books and scrolls in place the way he does while riding through traffic in the Moors. With those scrolls just haphazardly tossed around, it looks a bit like my desk. Note to self… buy scroll-cases to pack that stuff down. 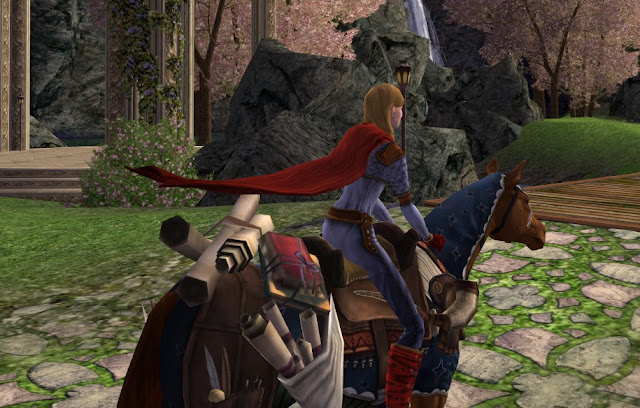 Here we are taking our large festival haul back to the home of Angels. I ended up buying one of everything from the Faire, 6 steeds, an extra Chicken coop because I NEEDED it, and a dozen gifts for others. The Angel house is “busy” with animated things like the windmill, the Cave-claw, and the chickens. I should bring the Elf Female Property guard over. JThe only complaint I have is that I want more "hooks"... if I want my yard to look like festival threw up on it, that should be my prerogative. 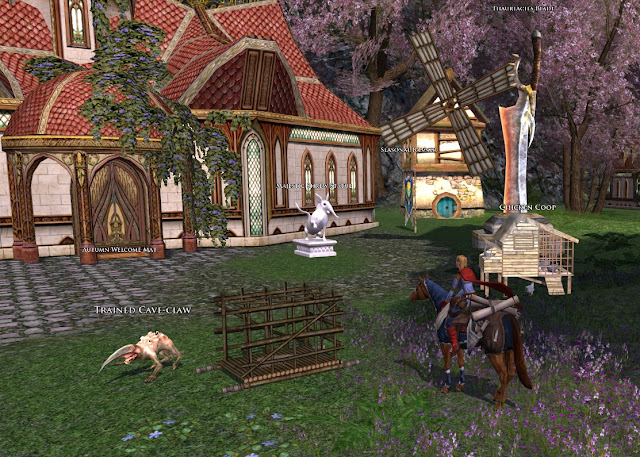 Farmer’s Faire Grade = C minus
Here was my assessment during the Faire. (faire-hobbits-dont-get-drunk)

Though I ended with mixed feelings about the Faire, I still enjoyed playing with the people around me and enjoyed the quests that were working.

Reader and new friend Aeronwy visits the Egg hunts and shows how to rock the Purple Steed outfit. 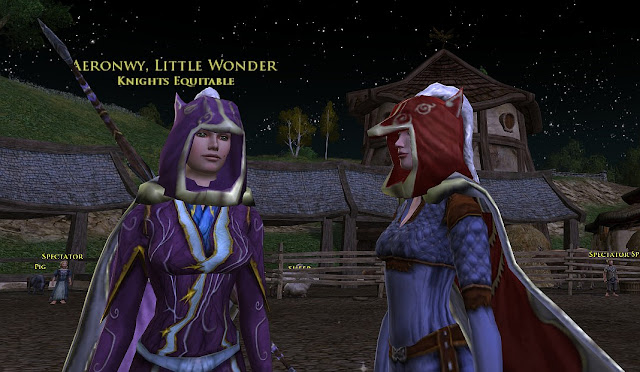 Sis Sansanor rides in the dark hours toward the Faire on the Steed of Night, ready to see what festivities await. 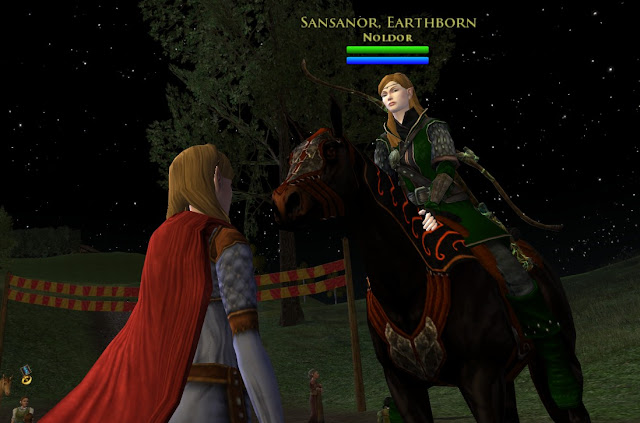 Danadelion, like all of the lildanas, got her Farmers Faire Steed. She hung around to have a nice chat with Will Peartree. 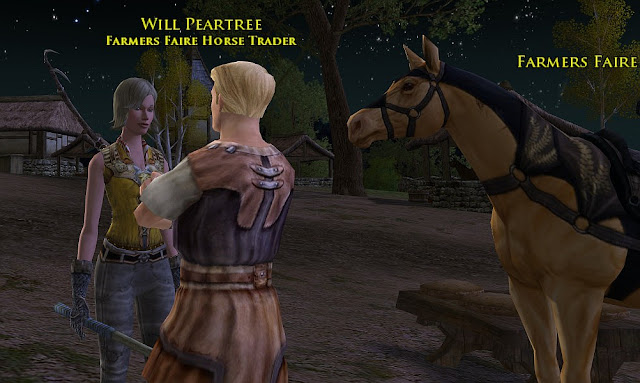 Danadalyn really hit it off with Carl Proudfoot. It isn’t surprising as most hobbit boys like the wide-eyed minstrel Dalyn. 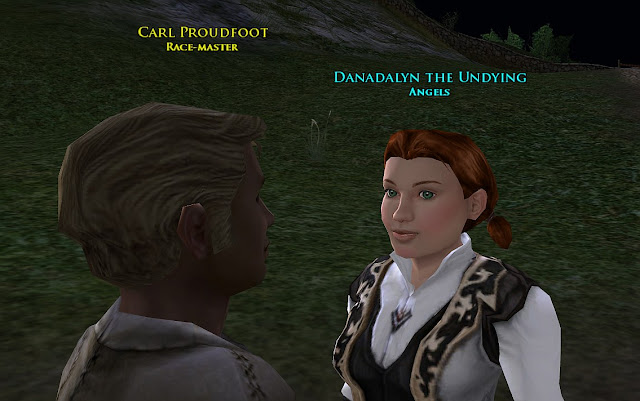 For such little activity it actually has, Hengstacer is a popular place during festival. Dalyn met up with Cherrypop, riding the Fleet-footed goat, as both were preparing to get their festival steed. 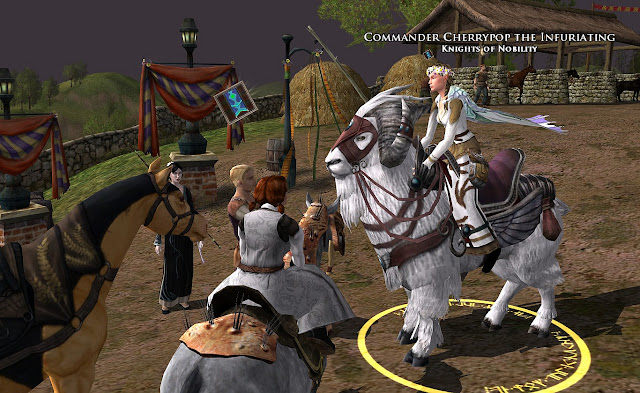 Lagoona sports her newly acquired Circlet of Fresh-Picked Flowers. As so few Golden eggs existed, she set her target on some white eggs and a few festival eggs. 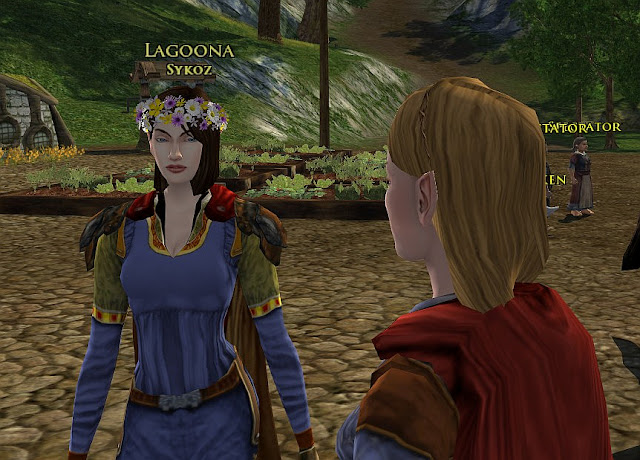 Danaboffin voices her opinion about the special request to catch an “Unlikely fish” from a pond that apparently has no Unlikely Fish in it. 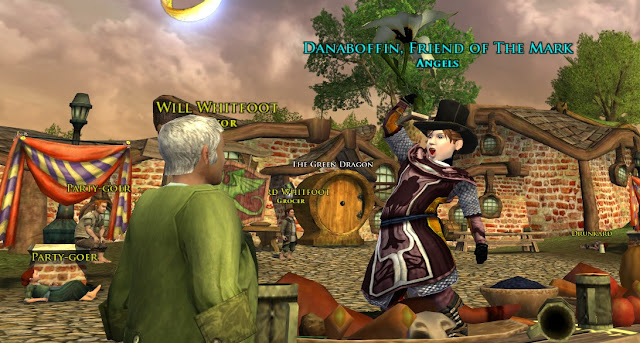 Before Danaonar left to go back to her role as Thorin’s Hall greeter, Nick Cotton expressed his feelings asking her to stay. Unsure if “carnival life” is for her, she got flustered by his forward gesture. Should she accept this thick footed fellow’s request, or head back to her hammock alone??? Nice wrap up. :) Now, I must know, what top is that that Danadalyn is wearing?? I think I need it!

Hehehe, you sound a bit like me with the "FAIL!". :D And lol about the "festival threw up on my yard" bit! :D

I've always been a festival completionist. This is the first one where I stopped. I was actually trying right up until they made the tickets bound. I stopped right there. I didn't even finish the non-ticketed deeds. They made me *that* fed up. This single festival (and well, experiencing Guild Wars 2 :P) has broken me of my deed completionism I think. A bit sad that.

Others have suggested what you have regarding the egg game. I full agree. Set timer, more spawns, NOT TICKETED! (we subscribe for a reason), no collecting extra white eggs once you got your five (like shrew stomp, no stomping more), and you're blocked from collecting coloured eggs that you've already obtained.

The fishing quests... just plain bad all around.

Solitude sounds so... alone and lonely.
The Angel house is my Fortress of Awesometude! lol
The lildanas needed somewhere to go so they got the Angels house.

I am making a note to ask tonight what Danadalyn is wearing. I'll reply here when I have the answer.

I believe it is a robe, common drop, Dunland area. Mebbe a smarterer cosmetic guru will drop by and give insight before then. (A search on the site for "Danadalyn" shows that she received it before Christmas last year, http://www.danania.net/2012/02/lil-danas.html).

Aww, mebbe the Summer festival will be less ridiculous and get us back on deed-er track!

Totally understand about the *giving up on Faire* part that you experienced once TicketGate happened. Thankfully for me, I had done everything except Golden Egg and Fishy very fishy by that point. Having never seen a Golden egg drop after more than 300 egg hunts AND confirming so few found on server after 12 days AND TicketGate flattening my ability to spend all day in Sandson's Farm, the Faire broke my will to continue also.

You are the conqueror of Saruman T2! You can't let these silly hobbits bring you down! :D

It's probably the Robe of the Learned Stag from one of the first towns in Dunland. (Several other quests in the region and the Dunland quartermaster offer a lookalike.)

Allow me to introduce myself. I am Aegthil of Gondor and my heart beats only for you. For you I promise I will wear my special Rose HawtPants, which I am sure you will find very exciting when we finally meet.

Please accept these flowers and chocolates as a token of my undying esteem.

P.S. Don't listen to anything Harperella says about me, because it isn't true. She can be so catty.

Ok, I found it...
It is the Noble's Woolen Robe; it is obtainable as a reward from the Quest: A Shot in the Dark. Aeronwy was right on! There are two other robes that look identical - Tattered Robe of the Dunland Sage, and Robe of the Learned Stag. :)

I have spies out and have seen the hawtpants... and am enjoying the dizzying image.

*slowly nibbles a chocolate... breathing in the aroma of the flower bouquet...*
Thank you. I assume you will stick around, yes?

Thanks for the pictures of the Steed of the Lore-master. I needed a final push to buy it and you helped.

As always, thanks for the awesome site.
-Morimatra/Libribellus

Matthew! You are very welcome!

If you check the "All the Steeds" page, you will find how fancy the Steed of the Lore-master looks as a Warsteed. ;)