A Dream of Weatherstock 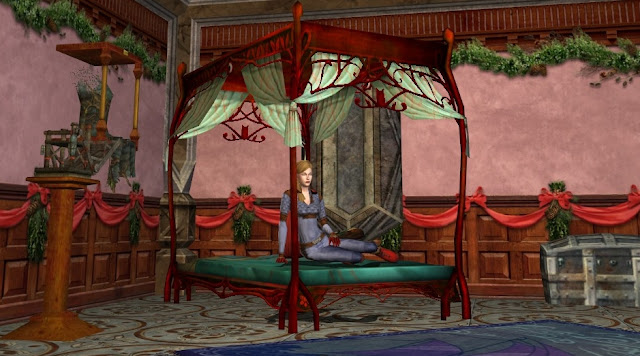 Last Friday night, after an enjoyable time pounding the horde of creeps into submission (or was I the one getting pounded?), I went to sleep in Arkenstone.

Through my mind’s eyes, I saw myself flying across the vastness of the abyss. Unlike other visions where I have become a chicken, a horse, or a ranger, where I still exist in the world but interact differently, this time it was different. I awoke in a world called Landroval, in a time called Weatherstock.

Toto, I have a feeling we're not in Arkenstone anymore. .... We must be over the rainbow! 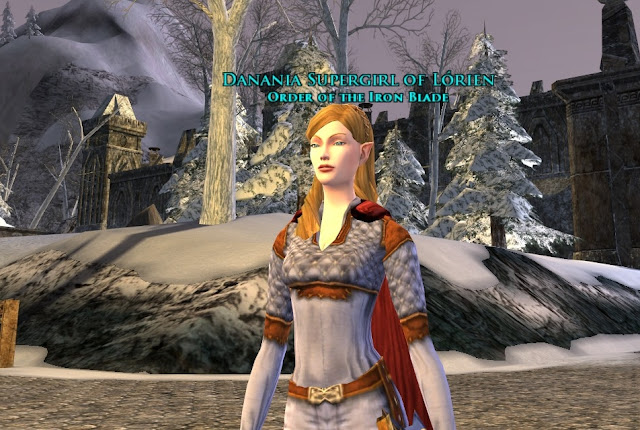 I had been summoned by friends I hadn’t seen since a previous age (beginning). Szarmaleth and Jairandir were there to meet me. We were soon joined by another old friend, Droggyr.

Szar: Are you a good witch or a bad witch?

Dana: I'm not a witch at all. I'm Danania, Supergirl of Lorien, from Arkenstone. I came to see the Weatherstock.

Jaidan: She wears the ruby boots.

Szar: Oh, so she does! Well bust my buttons. Why didn't you say so in the first place. That's a horse of another color, Come on in! 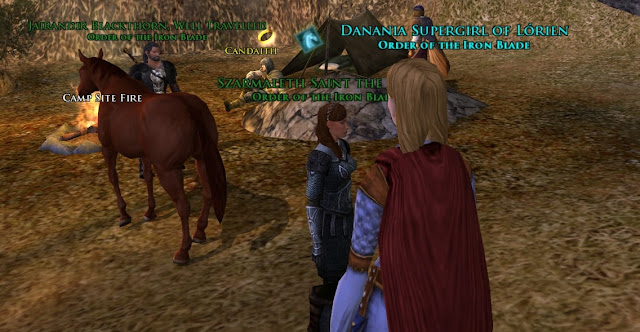 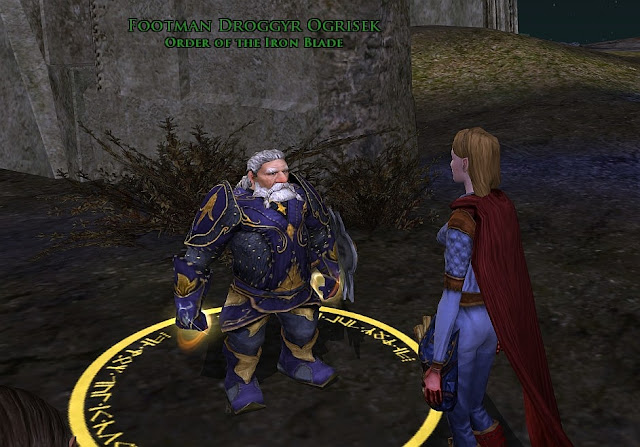 It’s time to see what drew me across the impassable divide.

In the Lone lands, as we walked up the path toward Weathertop, the excitement builds, the bustle and intensity of hundreds rolls like an ocean wave. The crowd is thicker than I have ever seen. As the information rolls in, I see nametags on all these strangers… so very many that I “/n” to focus on their faces.

(side note from the conscious self… Szar warns me to switch out of Ultra High view to Medium to reduce lag, but she was the one who designed this system and it has never been properly put through the paces. It handled the view just fine. J …but if you are ever in a too-much-information area and unsure of your system, follow her suggestion and scale back.) 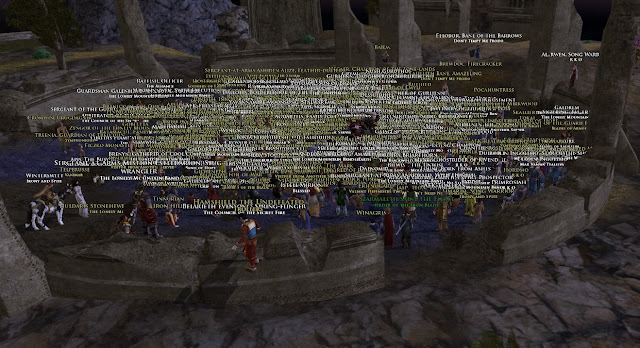 Through the crowd, I found my friend Goldenstar and gave a /hug and a quick hello, as all watched the revelry on center stage.

It looks like I have arrived mid-festival as one band leaves the stage and the Emcee Harperella announced the next group of performers.

"...This is positively the finest exhibition ever to be shown... well, be that as it may, I your wizard emcee, par adua outer, am about to bring to the stage the next group that will send your mind racing on an unexplainable journey..." 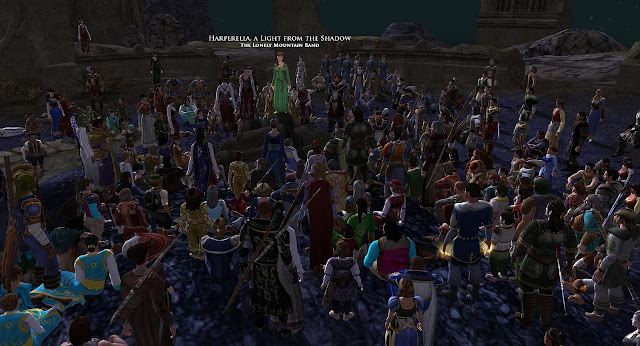 A group lead by lead singer Ingolemo took the stage. 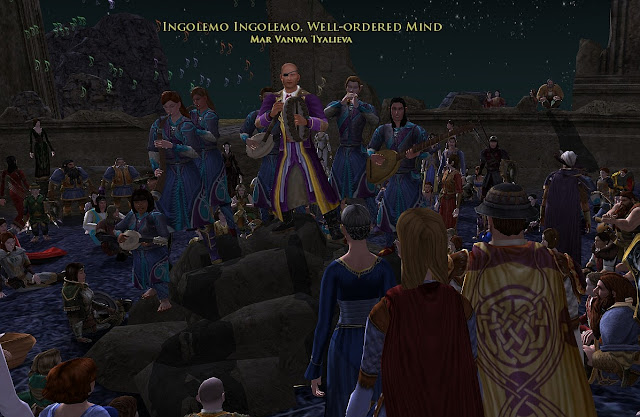 I followed along as the captions imprinted on my mind. His words strung together, I read his lips sing a ballad, called Stridin’ Man. 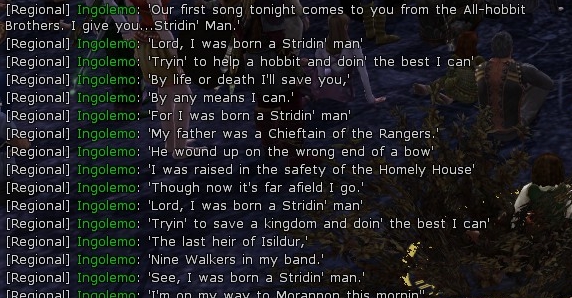 It is my dream, and of course, in my dreams, I fantasize that people actually show up to read my blog. So, naturally, I had the extreme pleasure of meeting a hobbit named Apis, who recognized me and said she was a fan of the blog! Wow, what a nice thing to say in a dream! 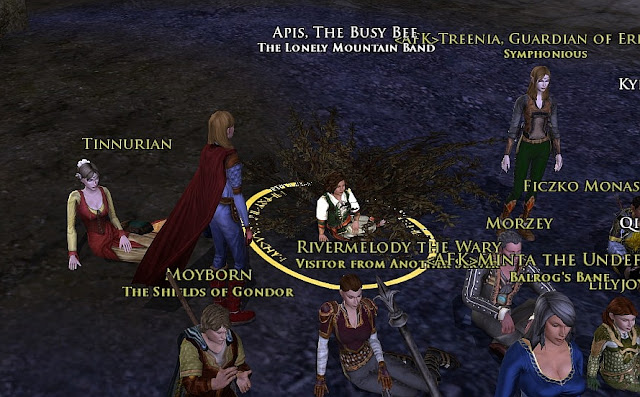 I watched a few more bands perform as I could feel my time slipping on reality.
Here are six more.

Phedelene of Leaves of Laurelin. 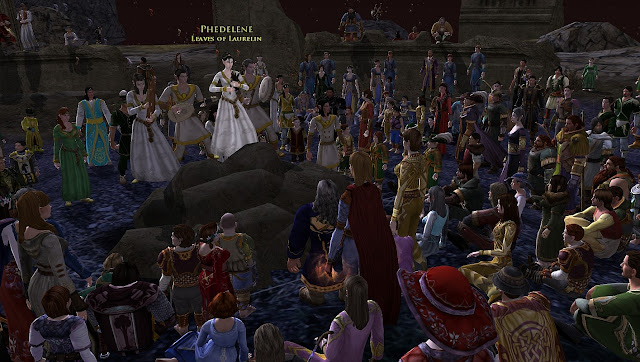 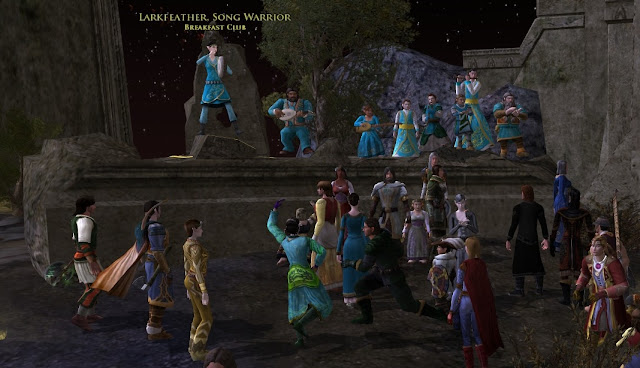 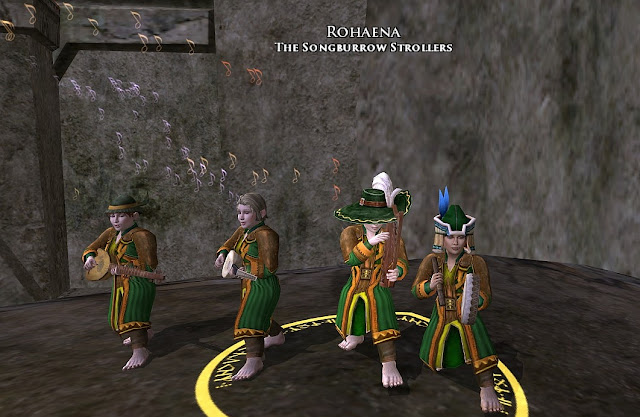 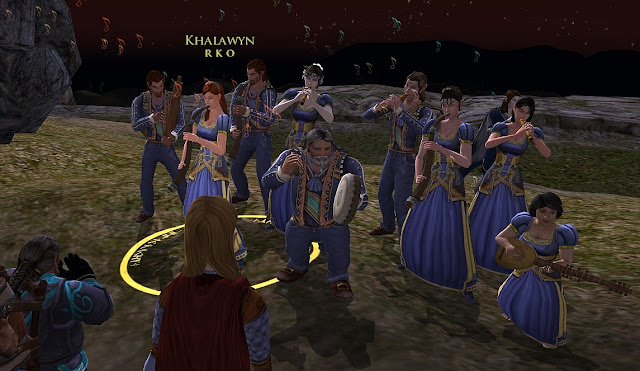 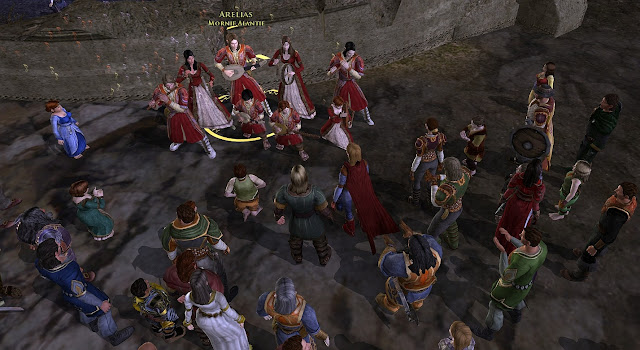 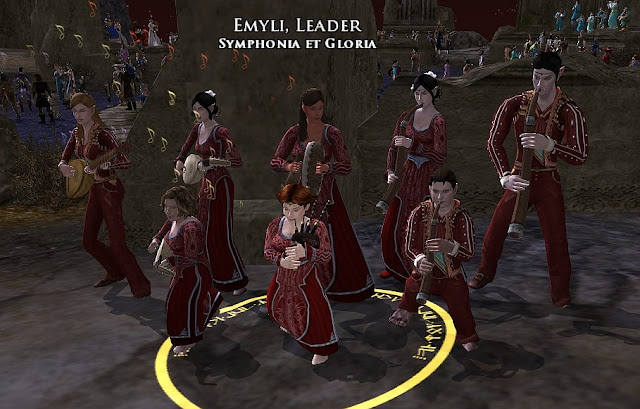 When I awoke, I was back in my bed in Arkenstone, bewildered, amazed by the amount of planning to pull off such an elaborate dream, and glad it was mine to share.

If you have had a similar dream and recognize any of these performers, feel free to let me know who they are so I can include them with the pictures! 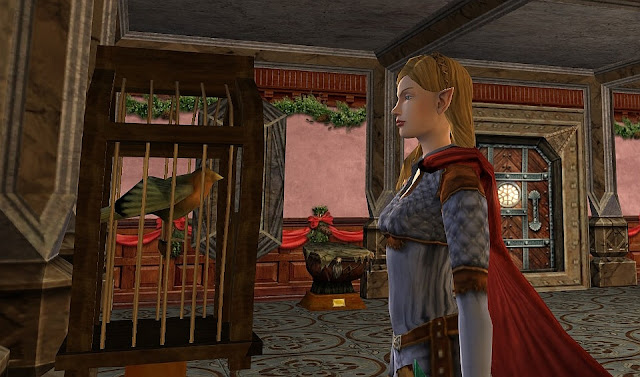 Update 07/03/12: followup to Weatherstock at dream-of-ingolemo-weatherstock-forever.
Posted by Unknown at 12:53 PM

I was right there close! I was near Goldenstar and Pineleaf (hobbit in green dress in the same photo). Apparently, I'm a girl in my dream =) (crowd pic)

Hey, what do you know, I had the same dream! And it was all the more pleasant for having met you there.

Weatherstock was wonderful. I can't wait until next year :). Now to convince Jaidan to let me apply to the Lonely Mountain Band kin.

Great picture Tomeoric!
Darn it of me for not having more coordinated dreams and not realizing you were there in the subconscious!

I see Goldenstar in your picture. Would you be the hobbit in greys and blacks in center screen? :)

(As always, feel free to click on the pictures in this blog for bigger versions.)

Yay Apis!
You made the day much more enjoyable with you in it.

Ha! Who is in charge there anyway boss??

Aye, that be as fine a dream tale as ever I heard. I'll be tellin' me brother Droggyr about this, o'course. He had so much fun, 'e went on and on about it until the wee hours o' the mornin'. You know somethin's stuck in 'is head when 'e mumbles and sighs t' himself, and the sighs f' sure sounded like 'Danania...'. He wouldn't say nuthin' bout that, o'course...

Ahh, to have been at this latest 'Weatherstock'. Seems I missed me a fine time.

Do be sure to give him a light punch in the arm for me for pretending that he had forgotten me. We know better. ;)

Huh!? Did I dream a dream with hundreds of people! Perfect!

Viyole! That is the most plausible explanation, isn't it?
Or... mebbe you are a figment of my imagination?
Or mebbe, I am your figment?

I recorded the entire Weatherstock event. All 5 hours of it :). Unfortunately I didn't get all the lyrics :(. But if anyone wants to see I can break it up and post to YouTube

I totally forgot that Weatherstock was featured on PC Gamer Magizine and MMOreporter. They streamed the entire event (so damn cool) live on the sites. I just found the recordings on YouTube. Very long but you can watch the entire event. Btw that GM at the end is in a world of poo I think. I know I wrote a letter to Turbine about him helping a troll and interrupting the event. Others did too and on the forums (and orher major websites) The "uninformed" GM in India even gave a lead singer a mark on their account. Talk about a black eye.

Yay for coordinated dream capture and the YouTubes!

I am hoping that some in-game fan mail to the respective singers might get me some intell without having to parse through 5 hours of video that may or may not actually get me the answers I seek.

Poor silly GM. I doubt he will make that mistake again.

I'm assuming you're looking for lyrics :). I'll talk to a few folks from LMB and see if they can point us in the right direction.

Silly timezones! Makes it hard to check this stuff out. Looks like it was great fun, thanks for sharing it. :)

(tempting to roll a toon on Landroval just to check out the atmosphere!)

Yup - pretty much dead center in the dark spring outfit...

The trick then is to find yourself in someone else's perspective, which was takne at some other random time, where one or both of us may have been moving... like some advanced game of Where's Waldo. :D

You might enjoy the visit. :D
It was my first off-world experience and I had a good time!

For some, the song is not much without the lyrics. :D
Definitely Ingolemo had a whole extended ballad thing going on. lol
I'm sure others probably did also.

This sounds amazing! I've missed this as well, but your report of it is partially makes up for it. Cool to actually see some of the lyrics too. You introduction ("she wears the ruby boots") made me laugh so much.

With a little luck, mebbe my fan mail will get a reply and we can see more of the song lyrics. We shall see.

Ask and ye shall receive. Knock and the door shall be opened unto you. Flatter Ingolemo, and watch out, you've got a friend for life.

For all of the Ingolemo fans, look out for a post in the near future. :) (and if you don't realize you are an Ingolemo fan yet, tune in next week.)

Did you know you're in the "Official" Weatherstock video? Jaidan and I watched it last night. You're looking at the crowd. Link is on the general forums. LMB wrote a song called Weatherstock forever that you should hear :). I think I can transcribe it or we can get it from a LMB member.

Oh my! Thank you for telling me, Filidh!
I am in the crowd shot?? Now I am famous! Woohoo!

(I have a copy of these lyrics, as well as some other surprises for another Weatherstock post... stay tuned.) :D

Ah-ha! If you made it this far and haven't seen it yet, lyrics for "Weatherstock Forever" and a selection of Ingolemo songs are now provided on the post "http://www.danania.net/2012/07/dream-of-ingolemo-weatherstock-forever.html" (also now linked in the post above).